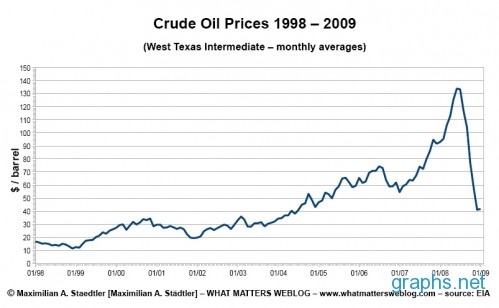 The past few months have seen crude oil and gas prices go up and down, causing a bit of consternation from investors and analysts and even consumers. Since these fluctuating prices affect almost all trading of commodities and transportation hikes.

There's been a disconnect between oil and gas prices since the start of 2009 as U.S. refiners processed less crude oil and slashed their gasoline output. With rising fuel prices and the faltering economy, there is no evidence that demand for gas will recover anytime soon

The passage of the economic stimulus bill, which will attempt to jumpstart the flailing US economy, could drive oil prices higher, which seems like a bad thing but would actually signify a strengthening of the economy as investors expect demand for oil to rise as the industry gets back on track.

Another reason why oil prices may not drop much further, and why they may actually increase in the short term, is because of cutbacks by the Oil Producing and Exporting Countries. The cartel continues to implement production cuts announced last year and may consider additional cuts at its next meeting on March 15.

In contrast, Non-OPEC oil supply is expected to grow by 150,000 bbl/d in 2009 and 130,000 bbl/d in 2010. The expected growth in non-OPEC supply over the next 2 years comes in stark contrast to the 330,000-bbl/d decline seen in 2008, which was the result of longer-than-expected delays in key projects, larger-than-expected decline rates in mature basins, and supply disruptions in the Gulf of Mexico and Central Asia.