In terms of addiction, Angry Birds holds 4th position which is just after alcohol, tobacco and Facebook. If the total time for which the Angry Bird has been played is rewind then it will take us back to the time when humans evolved. Some of the popular members from the Gang of Angry Birds include White Bird, red Bird, Yellow Bird, Black Bird, Mighty Eagle, Green Bird, Blu and Big Brother Bird.

Angry Birds has come out with its 3 games in the series till now which includes Angry Birds, Angry Birds Seasons and Angry Birds Rio. Majority of the players prefer to download the free version of the game. It has been seen that a gamer spends around 200 million minutes in a day to play Angry Birds which makes to 16 years of game play for every hour of the day. The game has been downloaded around 1 billion times.

Some Statistics related to Angry Birds:

The number of Angry Birds download in June 2011 was around 250 million and by May 2012, the figure is reported to touch a mark of 1 Billion. After Disney and Hello Kitty, Angry Birds has taken the third position in counterfeited brand in China. The revenue from the franchise is estimated to be around 106 million in the year 2011.

The travelling of Angry Birds through world is made by various means of transportation including boat, airplane, train and a car. In Europe, pigs flee with the eggs in hand to Finland which left the birds in hot pursuit. Then they arrived in New York and moved to southward later on. After getting the weapon training in Rio the pigs moved to South Africa and then the battle spread to Asia. The battle then moves to Australia where pigs are pinned and finally in Antarctica the birds get the victory. 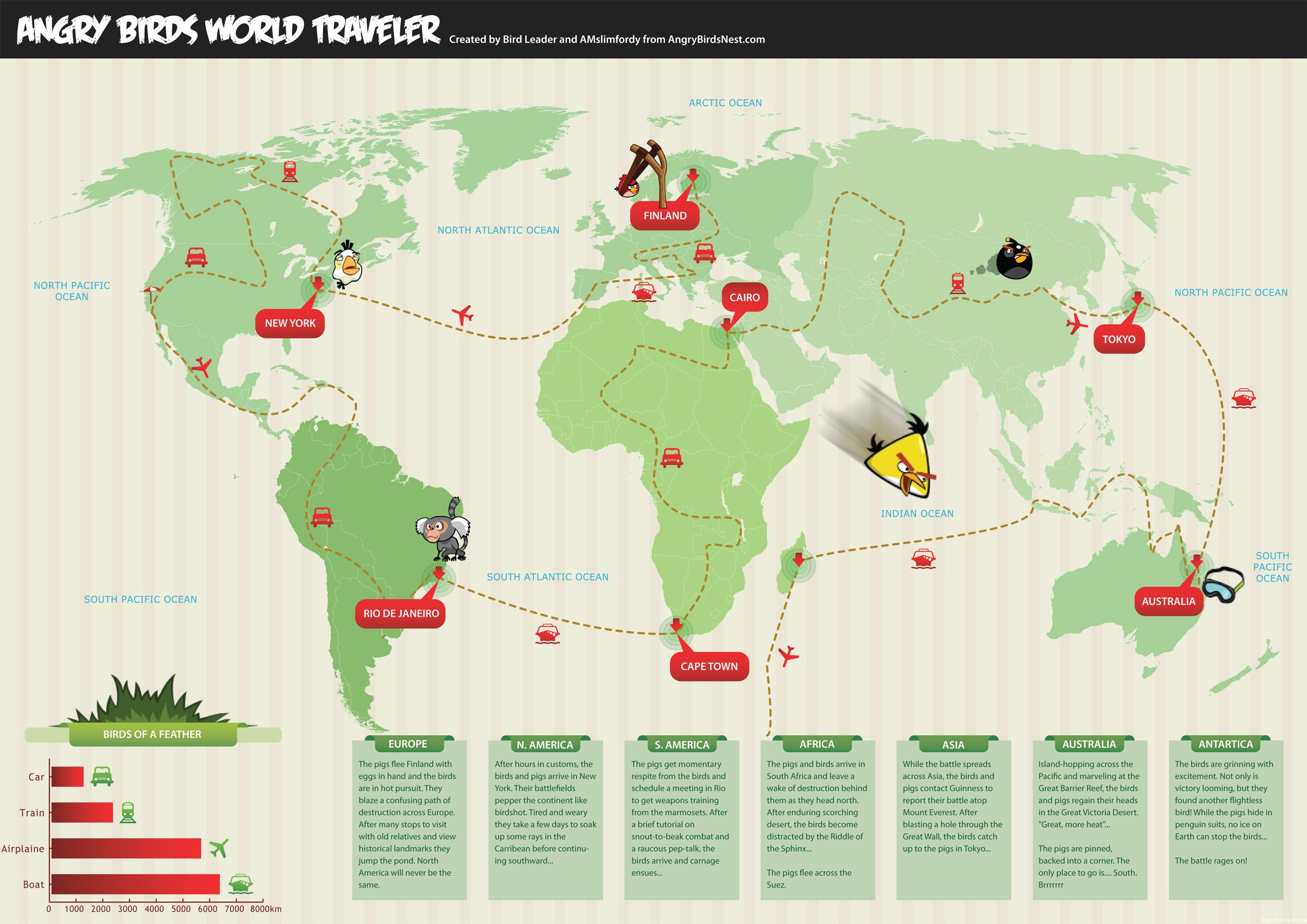 Angry Birds with 275 days is the most popular application in terms of number of days for which it stood at number one position in the iTunes App store. The other apps to follow the list are The Moron test, Moto Chaser, Flight Control, iShoot and others.

Star Wars is undoubtedly a big franchise but the growing addiction of Angry Birds cannot be underestimated. The total value of the Star Wars franchise is estimated to be around $27bn and on the other hand the revenue of Angry Birds in 2011 stands at $106m. The strength of Angry Birds also lies in its widespread presence on social network which is more as compared to Luke & Co.

If you are an ardent Angry Birds lover then you will surely enjoy the first Angry Birds Cable Car ride to Mount Faber in Singapore. Besides exciting journey of cable car, you can also enjoy array of themed activities that are planned on the top of the hill from June-December 2012.