Coffee was discovered back in 1400s and since then it has become the third most popular drink in the world. In the year 1600, Pope Cement VIII refused a Europe wide ban on coffee, calling it ‘delicious’. It was only in the 1900s that coffee became much better due to improved technology. Coffee has come a long way since the 1900s and today it offers flavors, fragrance and even oral gratification.

56% of the US adults consume coffee and an average coffee consumer takes 3.1 cups of coffee per day which means that a total of 66 billion cups of coffee are consumed per year in the US.

An average office worker’s intake of coffee is 20 cups per week which amounts to 1040 cups per year!

Finland, followed by Sweden and Switzerland consume the most coffee.

About 1.7 billion cups of coffee are being consumed by people worldwide on an everyday basis.

About 65% of the total coffee consumed is consumed at the time of breakfast.

Coffee is the second most traded commodity in the world and falls only after oil.

Things to know about caffeine

Caffeine occurs in 60 types of plants including coffee beans, tea leaves and Kola nuts. It is a fact that close to 90% Americans consume caffeine in some form or the other each day. What caffeine does is that s increases the dopamine levels that makes one feel happier and stops a person from getting drowsy.

The heaviest of the coffee drinkers include lab workers and scientists, marketing/PR professionals, education administrators, editors/writers, healthcare administrators and physicians. About 46% of all the US workers claim that they become less productive without the intake of coffee.

Affects of coffee on global economy

Coffee hugely contributes to the global economy. It forms a global market of $ 42.5 billion. Globally, about 25 million small producers of coffee depend upon coffee for their living.

It is a fact that about 35% of coffee drinkers prefer to have black coffee while three out of five persons feel that they cannot start their day without a cup of coffee. The most expensive coffee in the world is Indonesia’s Kopi Luwak which sells for $50 per cup of coffee.

The yearly sales of tea are 550,113 pounds in the UK while the yearly sales of coffee are 270,366 pounds. Consuming tea may be effective in the prevention of many diseases while coffee may be responsible for raising the cholesterol levels. Drinking coffee for a long period of time may reduce the risk of dying from a heart disease. 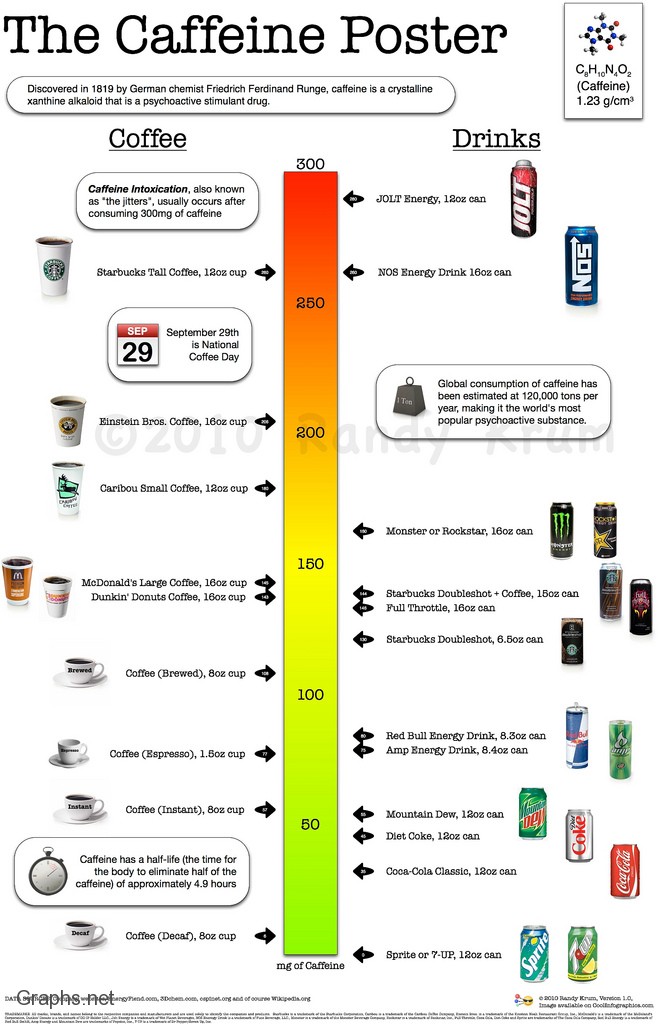 Caffeine was discovered by German chemist Friedrich Ferdinand Runge in the year 1819. Consuming 300mg of caffeine can cause caffeine intoxication also known as ‘jitters’. The global consumption of caffeine has been estimated to be about 120000 tons per year.