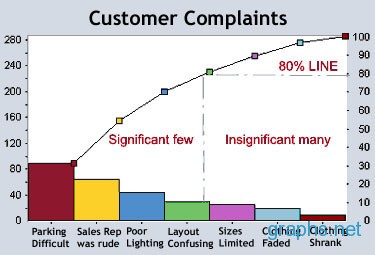 Anyone who has ever worked on charts for business presentations is familiar with the Pareto Chart. It is a chart used to graphically summarize the importance of the difference between two groups of data. It normally uses a bar chart and the values are shown in descending order. The Pareto Chart is one of the seven basic tools of quality control, along with the histogram, check sheet, control chart, cause-and-effect diagram, flowchart, and scatter diagram.

But did you know why it came to be known as the Pareto Chart and who coined it and what does it have to do with the economy?

The Pareto Chart was named after the Italian economist and sociologist Vilfredo Pareto whose “jaundiced view” on the human enterprise led to the 80/20 rule. He noticed that 80% of the land in Italy belonged to only 20% of the population. Upon further study of other countries’ economies, he discovered that this was also a recurring trend. So, when business management thinker Joseph Juran came up with this principle which states that 80% of the effects come from 20% of the causes, he named it after Pareto, who was the original brain behind the idea.

Some examples of the Pareto principle as applied to business analysis are: 80% of process defects arise from 20% of the process issues; 80% of customer complaints arise from 20% of your products or services; or to use a more down-to-eart example, we spend 80% of our time with only 20% of our friends or acquaintances.

And so the Pareto Chart was born, mostly to illustrate the 80/20 rule. It is now commonly used as a tool in the six sigma process and as mentioned before, total quality control