It is a commonly known fact that the world population is increasing at an alarming rate and this is more rampant in a particular nations like China, Asia, Brazil and United States.

If the population continues to increase at the same rate, then our future generations could face many threats and shortage of natural resources.

1. The Next Thing For Our Increasingly Overpopulated World

The current world population is 7097116087. It is interesting to know that every 8 seconds, one birth takes place whereas every 12 seconds, a death takes place in the world.

It is estimated that in the next 12 years, the world population will grow by another 1 billion and this growing population is causing many threats to natural resources.

In Australia, more than half the growth is from overseas migration and this is filling the skills shortages. United Kingdom and New Zealand dominate the migrant list in Australia and overall, this country is very culturally diverse. Australia is 52nd in Population and 6th in terms of land mass.

There are currently 40.2 million Americans aged 65 and above, and by the year 2050, this is expected to more than double! There are more elderly females than males and this gap is expected to widen in the future.

China has more than half a billion internet users which mean that every 1 in 5 internet users is Chinese.  At 38.3%, China’s internet penetration rate is higher than the global average but far below the levels of North America and Europe. China’s online shoppers are very frequent buyers.

It is an interesting fact to know that there has been a growth of 528.1% in the number of internet users since the year 2000. About 32.7% of the world’s population is on the internet which means 2.27 billion people! 30 minutes is the average time per day the Average American spends watching online videos.

6. Incarceration In The US

United States accounts for 5% of the world’s population but locks up nearly 25% of the world’s prisoners. The US has the highest documented incarceration rate in the world! Out of all the varied types of crimes, most of the crimes committed in US are property crimes!

7. Rise In The Human Population

The global population is increasing at a rate of 1.8% per year and the highest growth recorded was in the 1960s-1970s. If the overpopulation continues, by 2030 we will need to replenish the world by 50% more food, 30% more water and 45% more energy.

Over the past one century, the global population of Catholics has more than tripled and most of them live in Latin-America and the Caribbean region.  The top ten countries with the largest number of Catholics are Brazil, Mexico, Philippines, United States, Italy, Colombia, France, Poland, Spain and Democratic republic of Congo.

The population of Australia was 23 million on 23rd April and it has almost doubled since the year 1966.  Australia beats even highly populated countries like India when it comes to growth rate and one reason behind this is the double birth rate as compared to death rate.

12. The Numbers Behind China

D.I.Y. workers are working everywhere and 57% of them are males.  These workers are not only collaborative but are also problem solvers and very creative.  Most of them are aged between 30 years and 39 years of age.

15. The Growth Of The Elderly Population

Nursing homes are closing and not growing inspite of the growing elderly population. It is a fact that 35% of Americans over 65 years of live on social security. By the end of 2012, over 42 million seniors will be left without any care.

Some of the most populous countries in the world at present are China, India, USA, Russia, Indonesia, Brazil, Nigeria, Pakistan, Japan and Bangladesh with China being at the number 1 position. 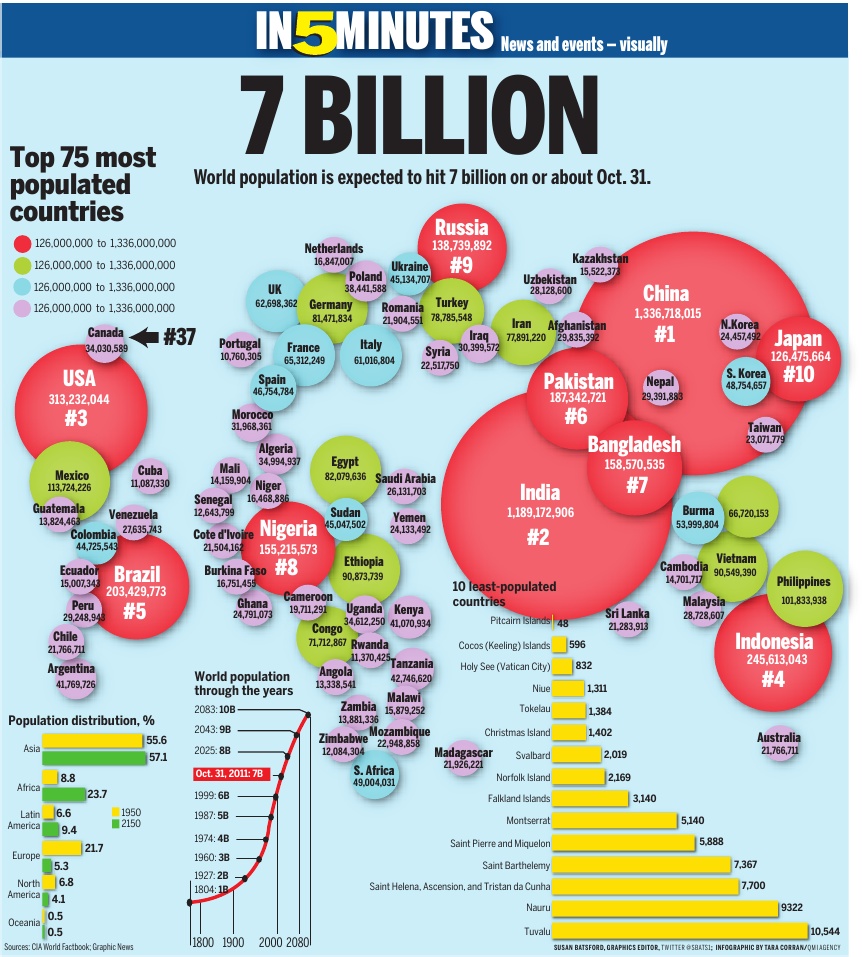 17. 60 Years Of Population Changes In Australia

20. The Strength Of The Information Society

It is a fact that 50% of the world population lives within a reach of a 3G network and there are about 2 billion mobile broadband subscriptions in the world. The economies with the highest 2012 IDI value are Republic of Korea, Sweden, Iceland, Denmark, Finland, Norway etc.