English is a language that is spoken in every corner of the world. With over 5% of the world’s population i.e. almost 400 million native English speakers all over the world, it is the second most popular language after Mandarin. Also these are over 700 million people who speak English as a foreign language.

In the modern world, English is not just the lingua franca of the population; it is also the international language of trade and commerce. In over 56 countries, English has been given the status of being the official language with over 4000 new words being added to the dictionary every decade.

So, here is a collection of the 20 best infographics on the English language to understand better the importance of it in our daily lives.

Even though some of Shakespeare’s writings may seem to be daunting at times, he is perhaps the most quoted of all. His witty phrases spell not only humour but also showcase a depth that is rare to find. Such phrases like ‘in a pickle’ and ‘green-eyed monster’ display a genius wit. 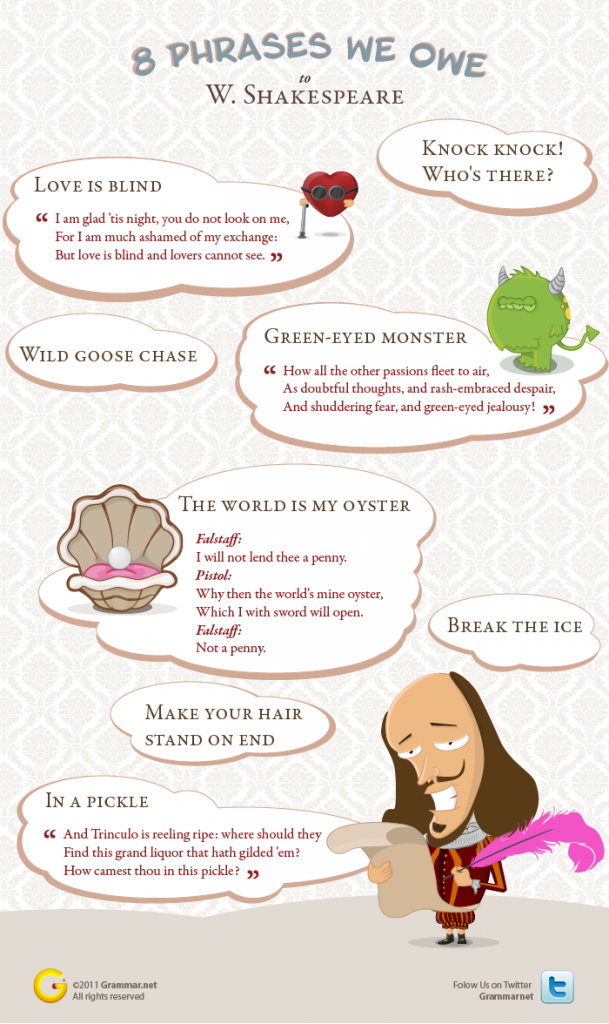 In terms of his body of work, Shakespeare is the most written about author in history of the Western civilization. It is thus all the more wondrous that on studying his plays, one comes about certain phrases or words that you can describe only as insults. Referring to someone as dunghill in the 4th act of King Lear or When in Julius Caesar when Marullus exclaims ‘You blocks, you stones, you worse than senseless things!’ we see the ingenuity of Shakespeare shining. 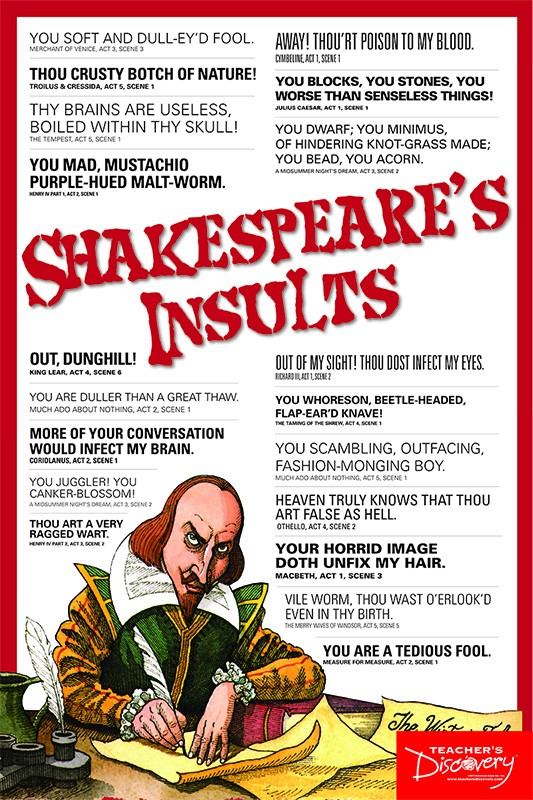 3. English As The Official Language of the World

English arrived with the Anglo Saxons in the 5th century and following Britain’s colonization, spread across the world. In early 17th Century, economic development in the US saw the making of its own English vocabulary and now with the advent of the internet, the evolution of the English language as the language of the more than 508 million speakers, brings up the question of whether it should be made the language if the world or not.

The ‘buzzing’ of tiny insects, the ‘flutter’ of bid’s wings or may it be the ‘gurgling’ of water, there are many such words that imitate, resemble or mimic the sounds of the actions to describe them. Used by children, embodied by animal noises or printed by comic books, they are funny, quirky but at the same time quite handy. They are known as ‘Onomatopoeic’ words.

5. Some Highly Misunderstood Words In English

Spoken speech gives birth to various words that are easily misunderstood and then would gradually, with overuse, creep up in writings as well. One of the foremost reasons of the spread of such misused words is ofcourse their use over the internet either through emails or through social media posting. And that is when dictionary companies would grudgingly add them to their repositories. 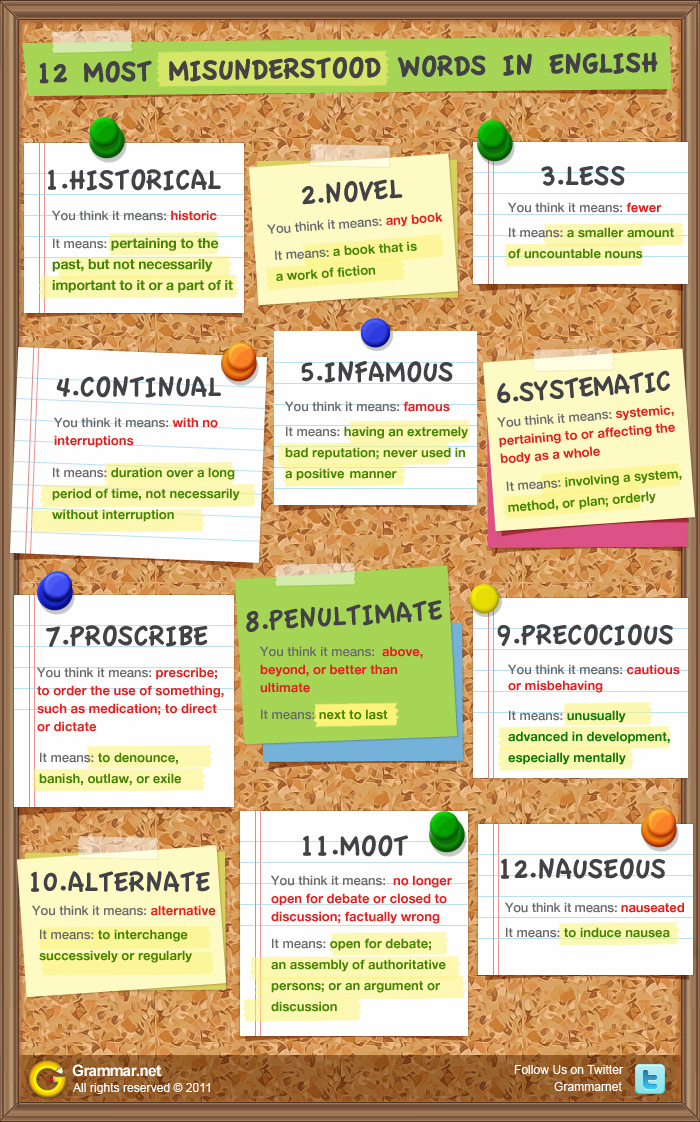 6. Homonyms And Their Cousins

Does it ‘affect’ you or does it ‘effect’ you? Troublesome really! Words like these, known as homonphones, may sound the same yet have totally different meaning. And again was it ‘there’ or was it ‘their’? Utterly confusing because words like this known as homographs, might sound absolutely the same but have entirely different spellings and usages.

English as a language is riddle with words or phrases that have taken on figurative meaning owing to their usage. They may be life based, knowledge based, love based or even colour based. But what is pretty weird is that some of these are food based idioms that make English a very peculiar language. For example you may have a friend who is as ‘nutty as a fruit cake’ or may even be that one ‘bad apple’ spoils the lot.

Since ancient times, our desire to communicate quickly and effectively have seen people sending smoke signals as a means of communicating through long distances. But now with the advent of technology, with micro-blogging or the system of shortened words, use of acronyms, terribly garbled grammar and abbreviations taking the place of smoke signals, English grammar is seeing it lowest point in English. Could this change be deemed as a natural evolution or is it rather a decline, remains to be seen.

Often, its only after we have send off a document or an email or a text, do we realize that we may have misspelled some words. With a mere positioning of an ‘i’ or may be an ‘e’, the whole meaning of the word changes. Worlds like their, received, beginning, until are the most misspelled word in the English language. 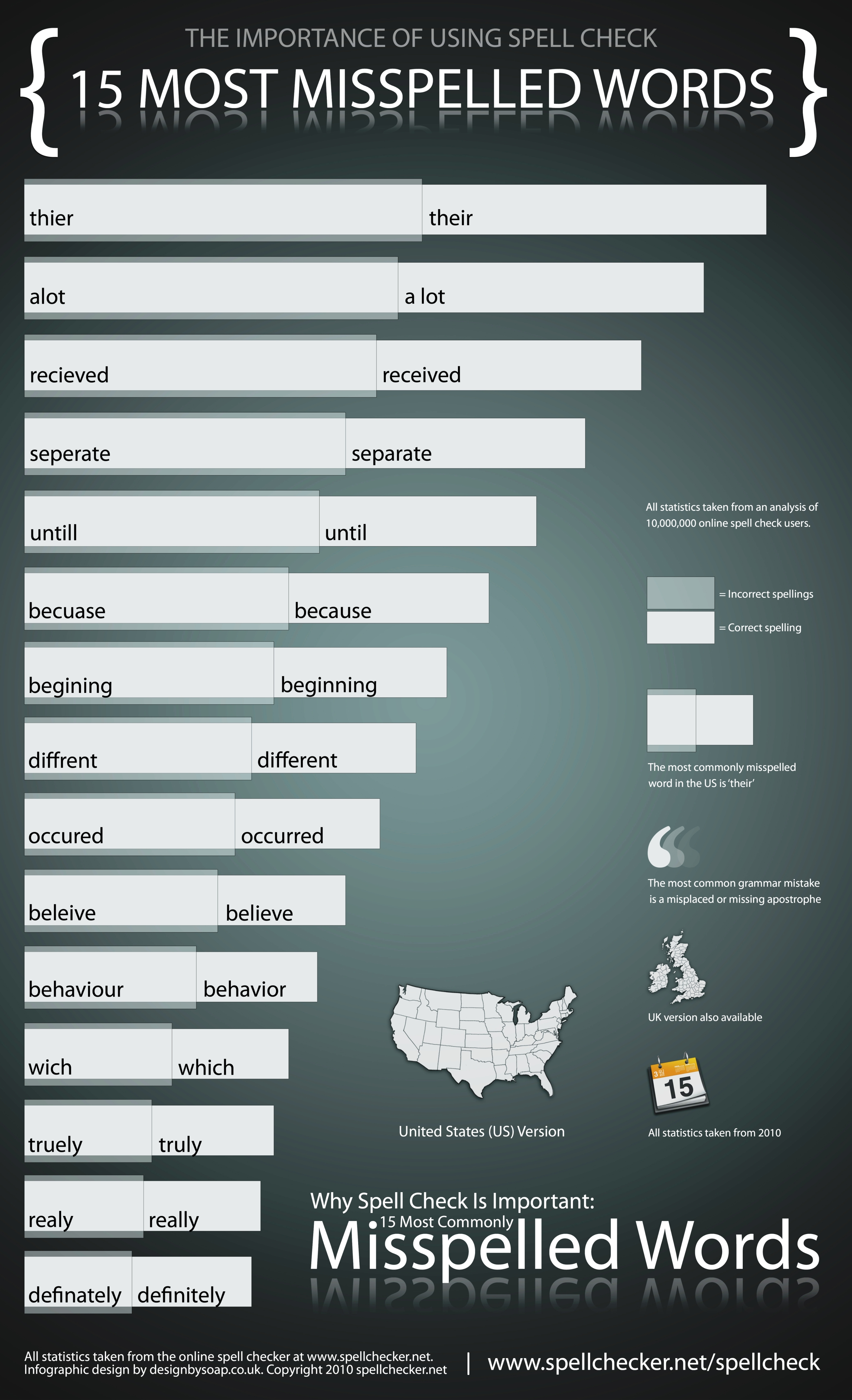 Not everyone is as proficient in grammar as an English teacher which is why goof-ups are a normal occurrence. But whether you do it deliberately, because you heard someone do it or it was a slip of the tongue that you don’t even realise you had made, grammar goof-ups could actually make you look silly in front of your friends.

English is the official language in almost 56 countries and is mostly considered the lingua franca in every corner of the world. Which is why, a non-native English speaker should make quite a lot of effort to learn the language given that it is the general language of the international business world as well.

French ofcourse is the language of the romantics. But saying ‘I love you’ in any other language doesn’t sound as sweet as it does in English. And with so much influence of television in our lives, it only makes sense saying it in English when we see all our favourite Hollywood ladies swooning at the mention of those three magical words. 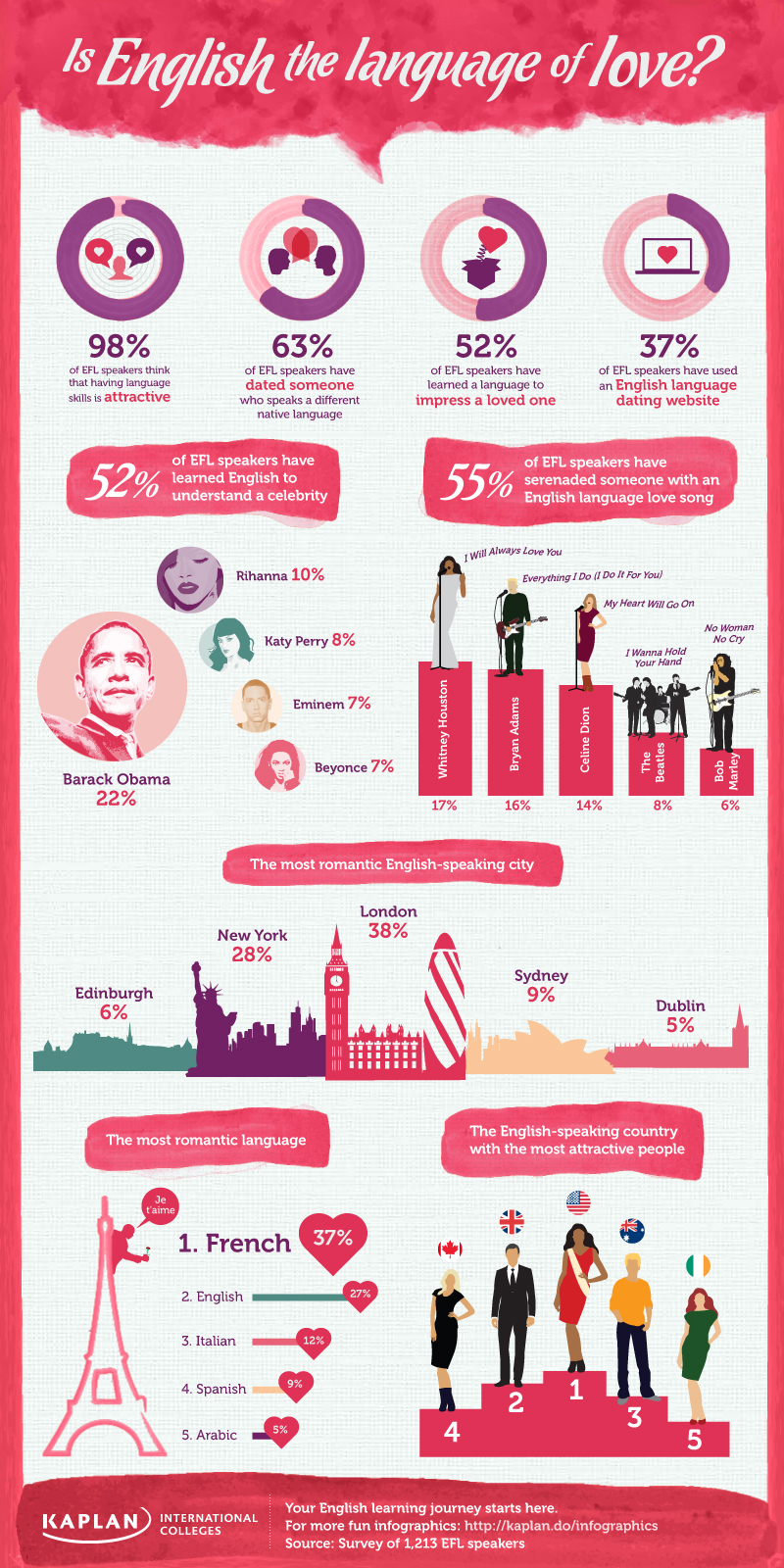 Teenagers all around the world are singlehandedly capable of changing the English language in a way that makes it sound native already. Be it their use of abbreviations like Thanks to THX and Great to GR8 that are frequently used over the internet or the use of different terms like washroom, dunny or bog to refer to a toilet, or babe, sheila or bird that is used to refer to a girl, teenagers today are defining language like never before in history.

Learning any language is fun if only the tools used to teach them are both innovative and interesting. Learning through the music of The Beatles, Michael Jackson or Bob Marley is not just interesting; it is easy to remember as well. Also the utilization of movies like Harry Potter, Twilight or even James Bond helps remember the words and phrases better since they can be easily repeated in daily life and can be fun to use as well.

15. Facts About The English Language

Words are spoken more frequently than they are written. And what is spoken wrongly will invariably be written wrongly too thus making any grammar conscious person shiver in horror. Which is why, the inherent confusion between anyone, any one, no one and none could be due to the fact that they sound so very similar.

17. English As A Language Of Communication.

Any language is dependent both on the written text as well as on the spoken word combining different sounds to create meaning that in turn helps communicate with the people around us. For English users over the internet it depends mostly on the written text and we find that there are almost 27% Internet users who use English to communicate. 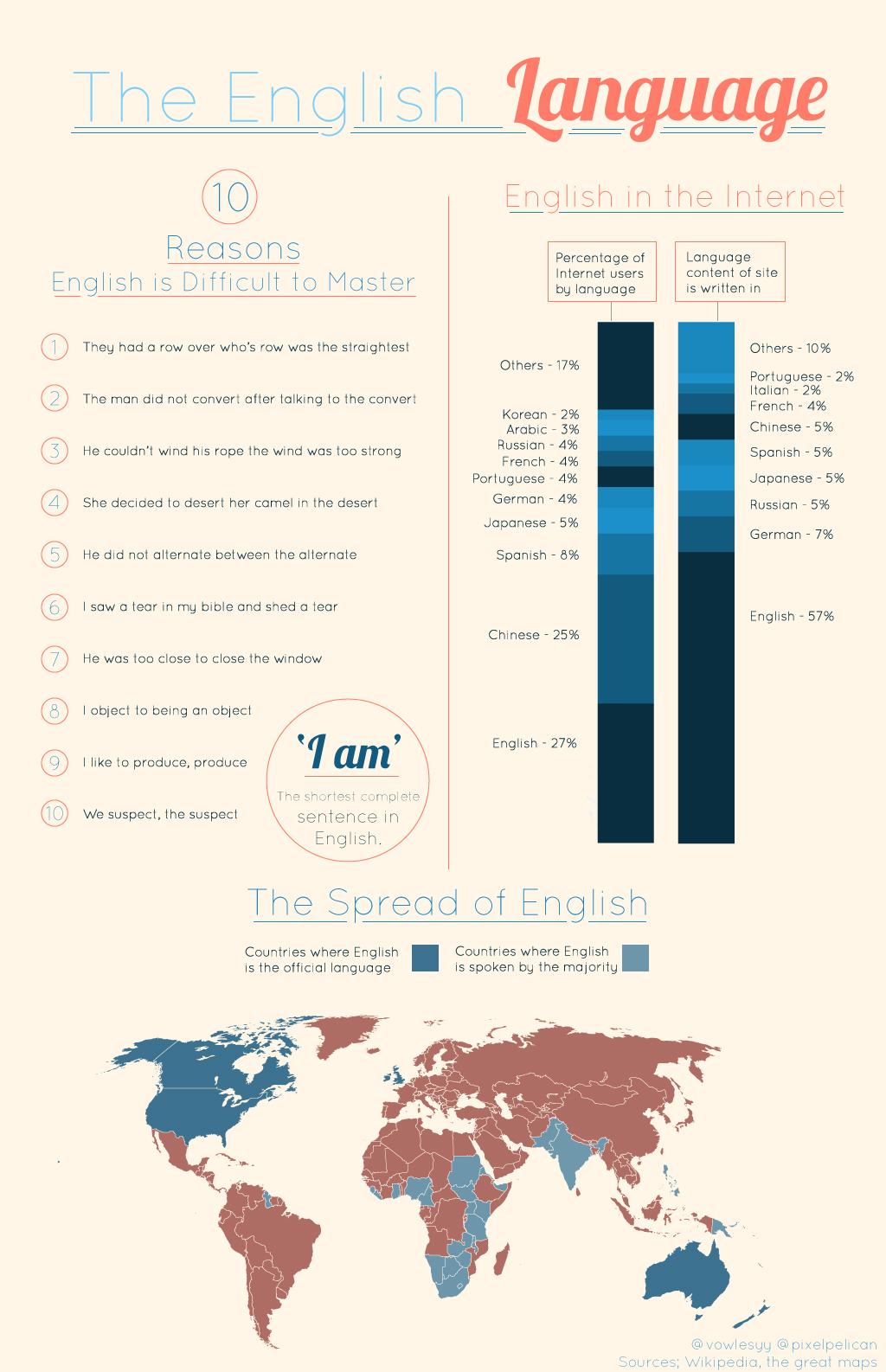 Anyone who wants to write an excellent piece of prose or even poetry in English has to have not just a working knowledge of the language but should also have a good grip on it grammar. Learnig a language’s grammar alert to the strength, flexibility, and variety of our language allows us to be in a better position to use it and to evaluate others' use of it as well.

19. History Of The Evolution Of English

It is believed that the beginning of the European languages started in India from where they moved north. These Indo-European languages became separate as people went their different ways all across Europe, ending their journey in the Celtic of Britain. English thus has evolved over thousands of years, influenced both by migrating tribes as well as trading men.

20. English: A History Of Change

Change is the indicator that something is truly alive and thriving. Because the moment change stops, so does growth and once that happens, end is always nearby. The fact that a language is changes shows that it is still flourishing. From old world English to texting abbreviations English has seen it all.