Hunger is not a new problem in the world. It has been around for centuries. Even wealthy countries have some degree of hunger, though less than developing nations. This problem has always been a sensitive one, with constant debates being held at political and social levels on how to eradicate hunger or what measures to take to reduce the prevalence of hunger. According to estimates, 1 person out of every six does not get proper food; and every minute 10 children die because of hunger across the world.

Statistics on hunger can be shocking and show that 2 hungry people out of 3 live in 7 countries, namely India, Ethiopia, Bangladesh, Congo, Indonesia, China and Pakistan. In 1970, the United Nations took up the issue of hunger on a priority basis and 126 nations agreed to 0.7 percent of their income for foreign aid. Today, just 5 countries, namely Sweden, Luxembourg, Norway, Denmark and the Netherlands, have managed to keep their end of the pledge.

How to Alleviate Hunger

One of the major causes of world hunger is poverty. Hence, to tackle hunger, the root cause, which is poverty, has to be tackled first. Poverty does not allow the people to get access to food and also stops them from getting the tools required to cultivate or grow food. Today, science is helping nations fight hunger. For example, in the Philippines, the World Fish Center has genetically improved the farmed tilapia, which is a type of fish, so that more people get access to it. In Ghana, scientists were able to grow cassava that had high yields and also rich in vitamins to help reduce the rate of undernourishment. If nations spend more money on agriculture and help this industry grow, it will help reduce poverty and thereby alleviate hunger.

However, besides poverty, malnutrition, conflicts, unsustainable farming practices, natural disasters and need for infrastructure are causes of world hunger. Malnutrition, conflicts and natural disaster are taking a toll on children. Every 3 months, more than a million children die, and malnutrition is one of the major causes of child mortality in developing nations. It is amazing to note that what it cost to buy a single missile could help provide lunch for a school of children for five years!

Why You Should Never Waste Food?

According to the United Nations, the amount of food that people waste in developed nations is equivalent to the total amount of food produced in the sub-Saharan region of Africa! If these poor and hungry people had access to this wasted food, they would never go to bed on an empty stomach, ever. In 201, around 33.79 million tons of food was wasted in the US. And the irony of it all is that in the same year, 17.2 million households faced problems and difficulties to provide food for all members of the family!

Facts about the Farm Bill

This is an important piece of legislation in the US. The Bill will help guide production of food and cost of food. In addition, it will also contribute to the Supplemental Nutrition Assistance Program (SNAP), which is helps feed hungry children across the nation. Although a temporary measure, SNAP has been effective in providing nutritious food to hungry children. And, if this federally funded nutrition program sees cuts, it will mean that the United States will have more hungry children than it already does.

Hunger Strike and the Body

Going on a hunger strike that lasts more than 21 days can have an adverse effect on health. In the initial couple of days, the person will look pale, have acetone smell in the breath and have a fur-like coating on the tongue. Thereafter, the person will start losing weight as the body begins to burn fat reserves. By the 7th day, if the person does not even consume water, he will suffer from dehydration and toxicosis which will result in death. If the person consumes fluids during the hunger strike, toxins will be flushed out. However, after the 10th day, the person will experience weakness, feel extremely tired and will also suffer from muscle loss. If the hunger strike continues, the person will experience liver and kidney failure due to build-up of metabolic toxins. In fact, even the brain is affected due to accumulation of toxins in the brain. 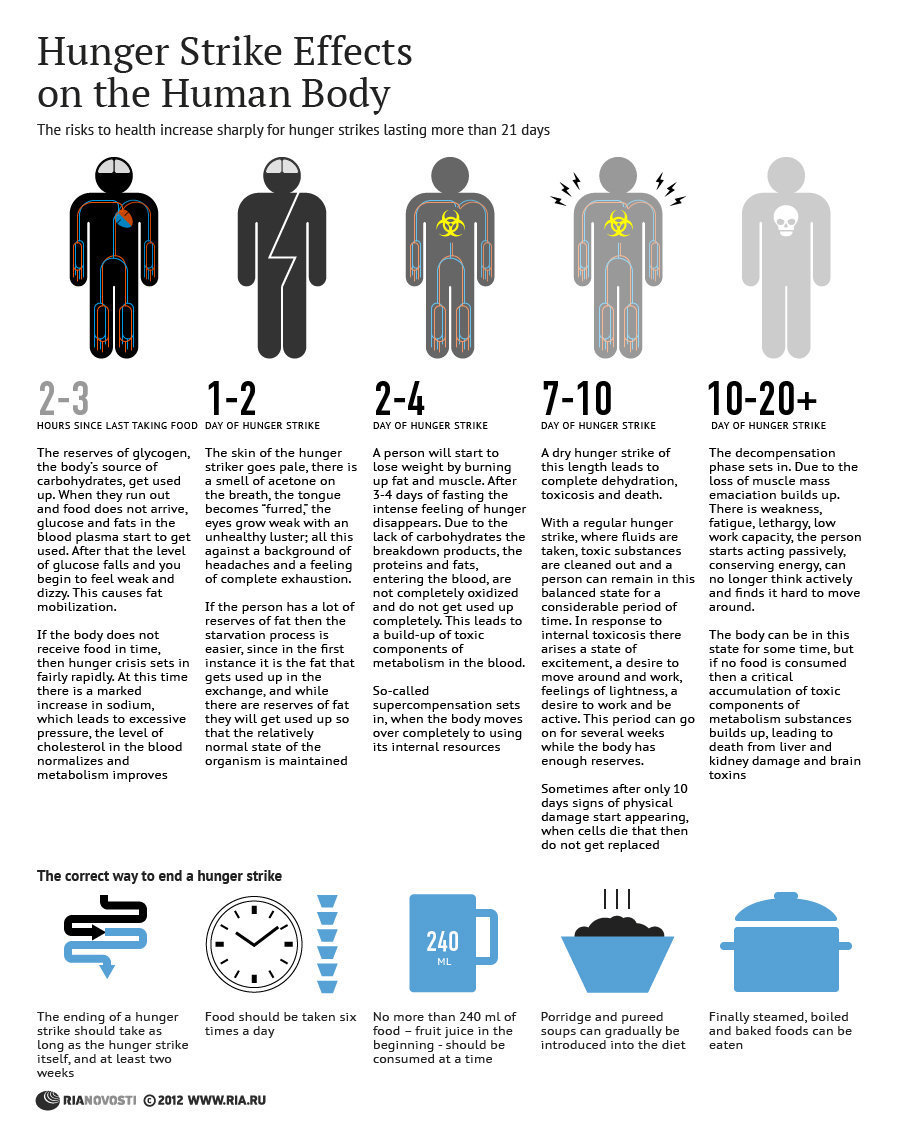 Africa is a good example of how governments have taken innovative initiatives to overcome the problem of chronic hunger. While the situation is still bad, it is not as severe as it used to be in the 1980s. Today, African farmers are provided with drought resistant seeds, they are taught sustainable farming practices that help increase yield, non-profit organizations and governments have worked together to provide farmers cheaper tools for farming, and farmers have also been taught to store harvested food better, so that it can resist insect attacks. 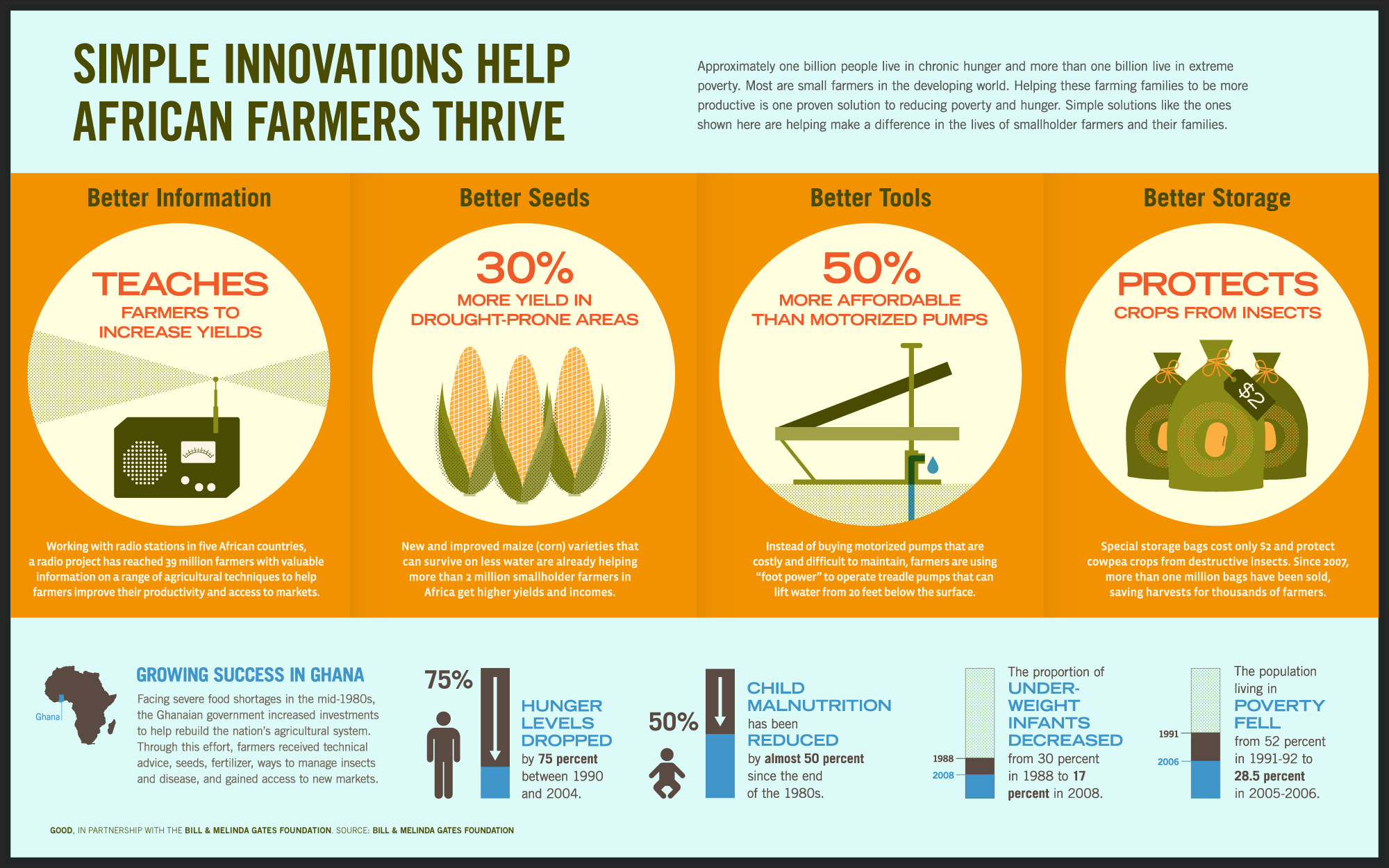 Causes of Stunting in Children

Lack of proper nutrition, healthcare and hygiene can have an effect on the growth of a child. When children do not get enough food, they suffer from nutritional deficiencies. This, in turn, affects their growth and development. Many children in developing nations are stunted due to malnourishment. Stunting cannot be rectified, but it certainly can be prevented if proper and balanced diet is given to children. 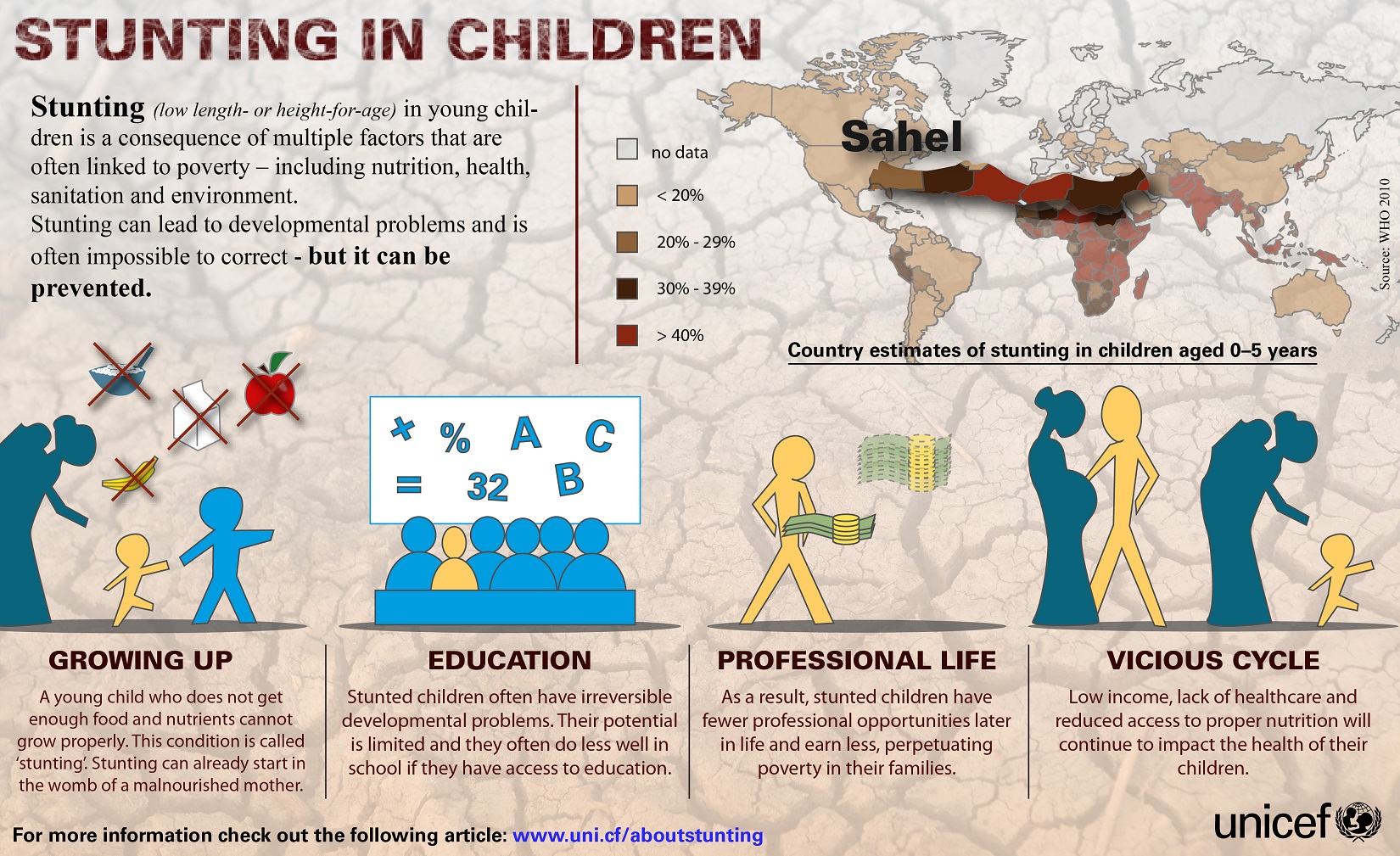 In many developing nations, women do not get the right nutrition. This has an adverse effect on their health as well as the health of their children. Without access to affordable and nutritious food, women and children can suffer from several ailment, some of which can be life-threatening. 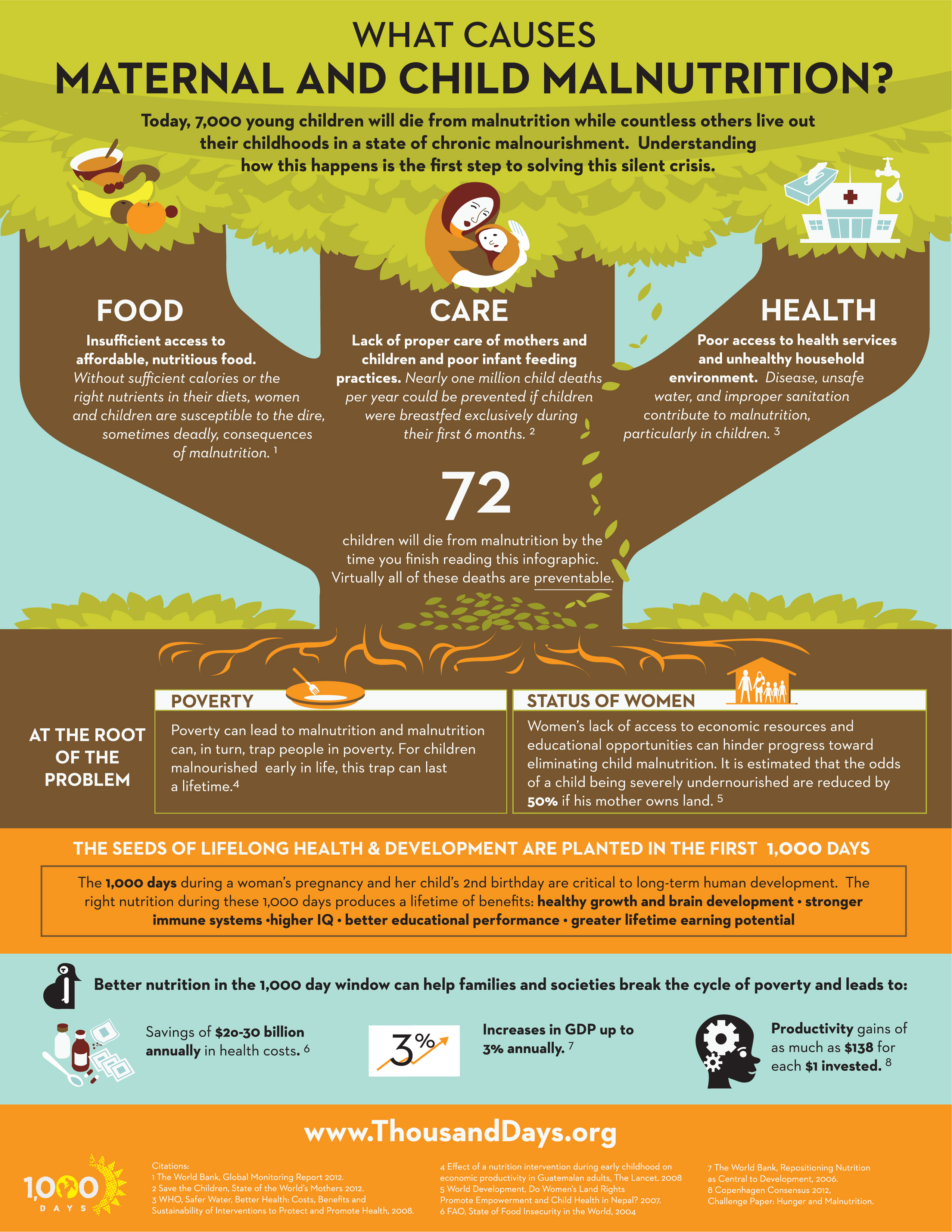 The Sad Story of Somalia

In 2011, the United Nation declared a famine in Somalia. The people of Somalia were already undernourished and suffering from malnutrition and when the famine hit the country, it hit the people even harder. According to estimates, nearly 50 percent of the population suffers from malnutrition. Starvation and malnutrition has made the people more susceptible to diseases. While the UN is trying to help the people, it is still falling short of funds. Today, many Somali are trying to escape from these catastrophic conditions by fleeing to neighboring countries and living in refugee camps, while others are moving from the famine hit areas to other parts of the country. This will also take a toll on the existing resources in those parts of Somalia where people are moving to.