Halloween is the confectionery holiday that is been celebrated from many centuries. In United States, this Halloween festival is celebrated on 31st October of every year.

On this auspicious day, kids and adults wear different scary costumes and households decorate their houses with jack o' lanterns and offer candies to all the children who knock their doors by yelling 'trick or treat'. 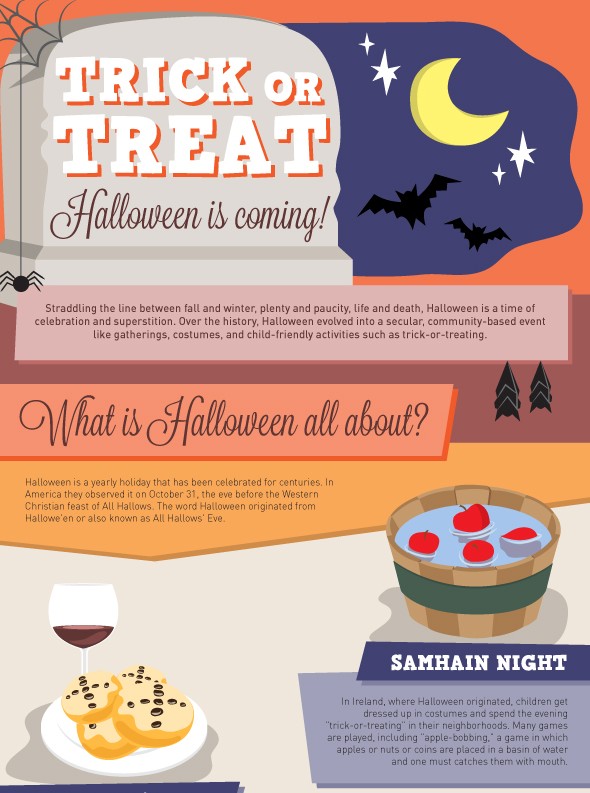 During the Halloween season, an average American consumes 24.5 pounds of candy. There are several treats you can find in the Halloween season of which the best 10 treats are snickers, tootise roll, nerds, life savers, M&m's, Reese's, twizzlers, butter finger, skittles and candy corn. 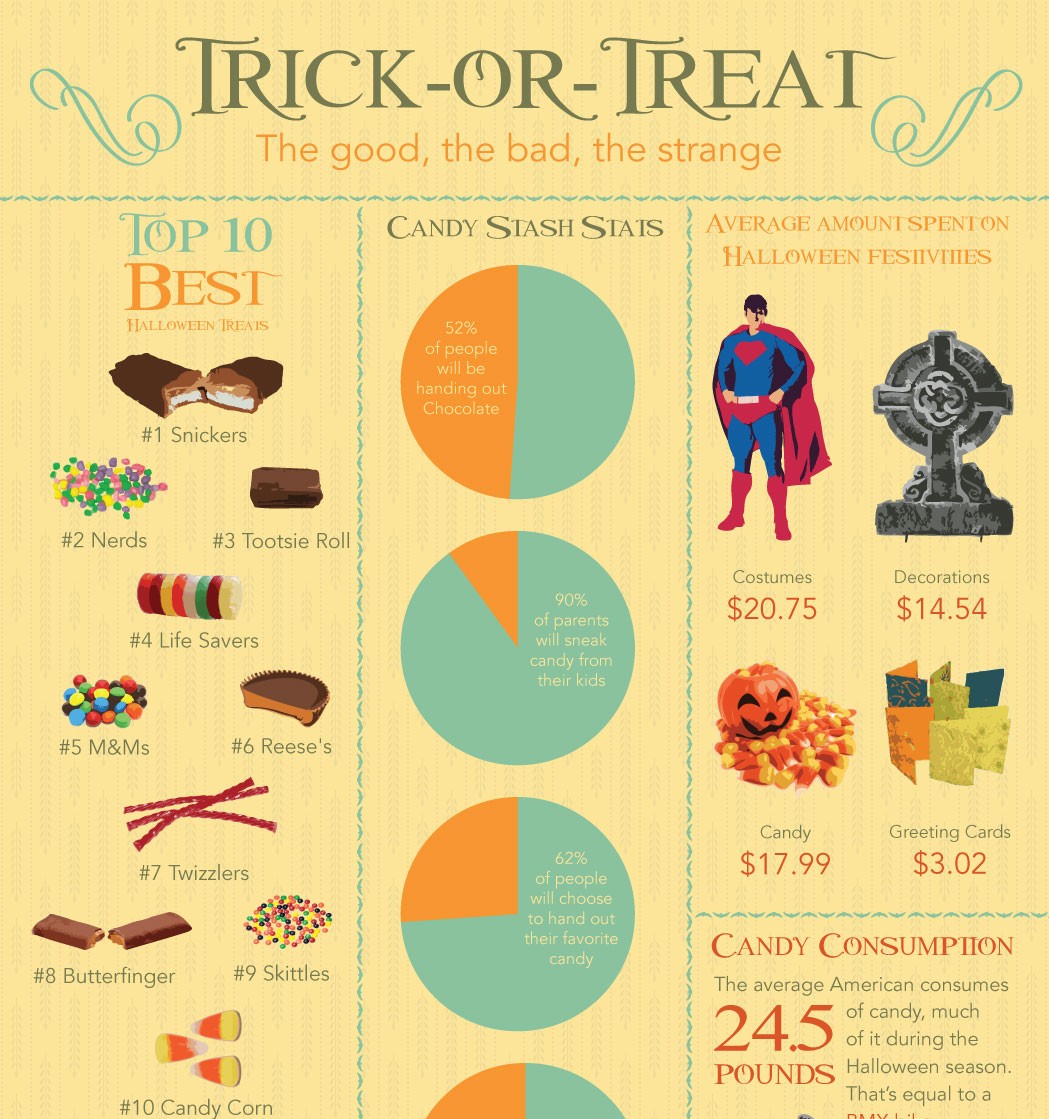 Source: My College and Careers

It is estimated that the national average spending for this year Halloween is $ 8 billion and on an average every household spends $ 79.83 . when surveyed 70% of Americans have reported that plans for this Halloween season will not effect economy of the country. 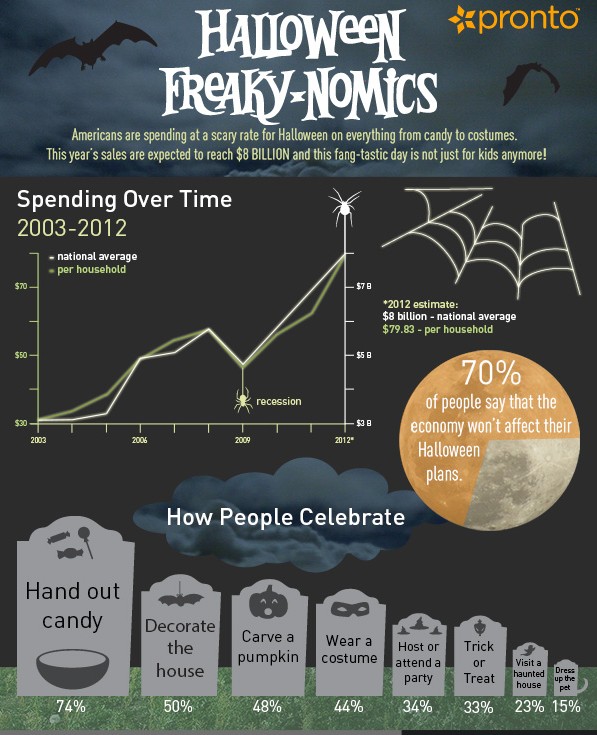 Several criminal cases were recorded during the celebration of Halloween festival in last few years. 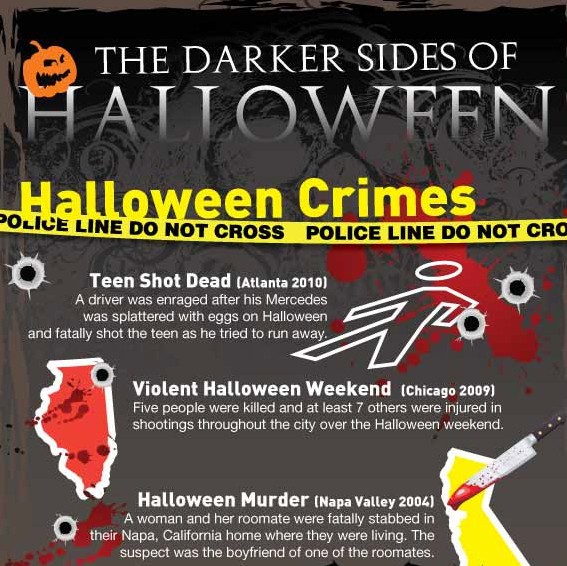 Every year Americans consume 7 billion pounds of candy of which 90 million pounds of candies are consumed in the week of Halloween, nearly 930, 000, 000 Hershey's candy bars are sold which includes 52% chocolate bars, 305 lollipops, 19% chewy candies, 16% gum and 14% caramel treats. 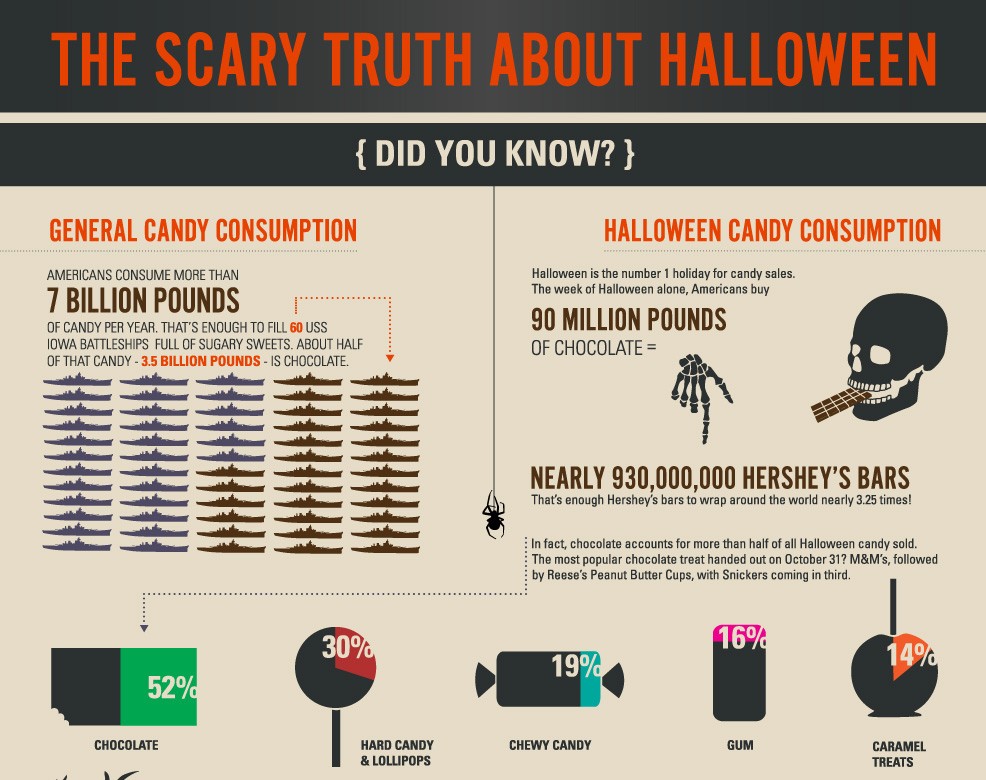 Halloween costumes for kids and adults:

Every Halloween is celebrated on 31st October and on an average, Americans spend $ 1.1 billion to purchase kids costumes and $ 1.4 billion is spent to buy adults costumes. 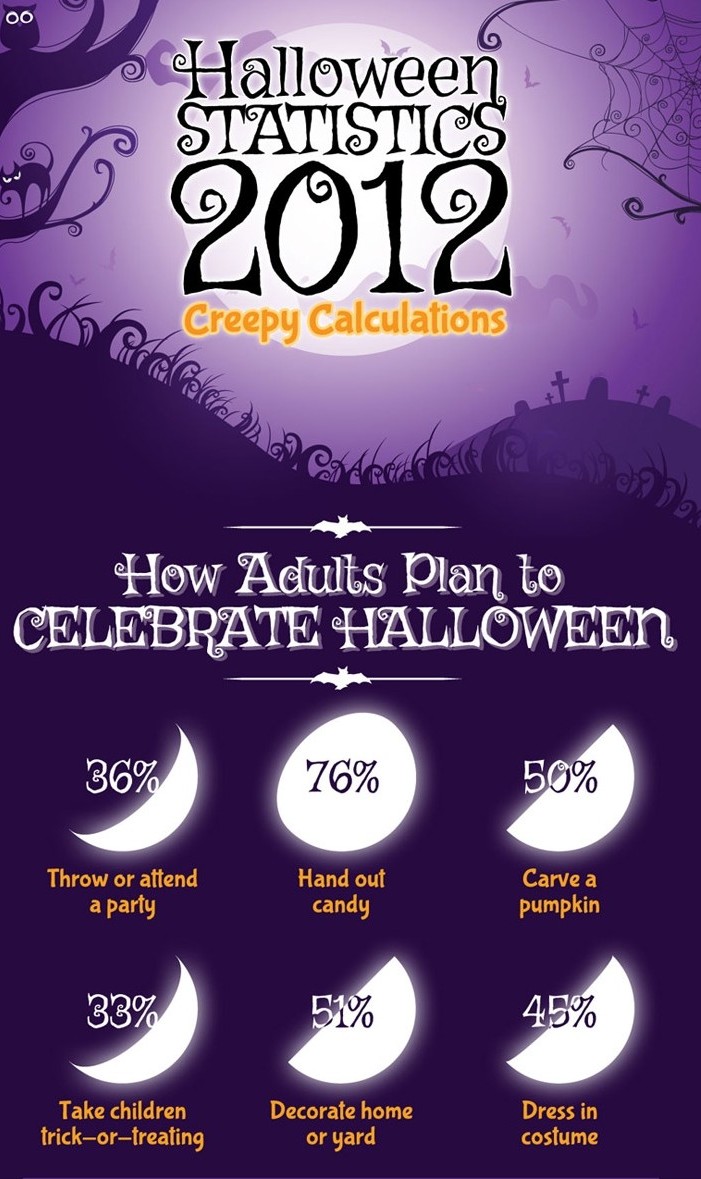 Halloween is the most awaited night for kids and reports shows that every year more number of children pedestrians are killed on this day. To avoid these accidents, 18% of safe parents started using reflective tapes on their child Halloween costumes. 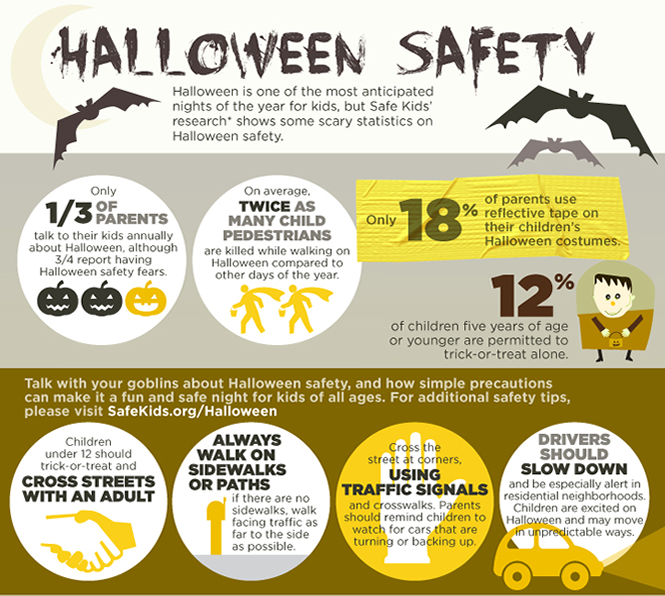 Pumpkin Sales in UK and US:

According to Tesco supermarket in UK and The Kroger super market in US, more than 18,952 tons of pumpkins were sold during the Halloween festival.

The total weight of pumpkins sold collectively in UK and US will equate the weight of 221,000 zombies, 430 million bats and 223 million tarantulas. 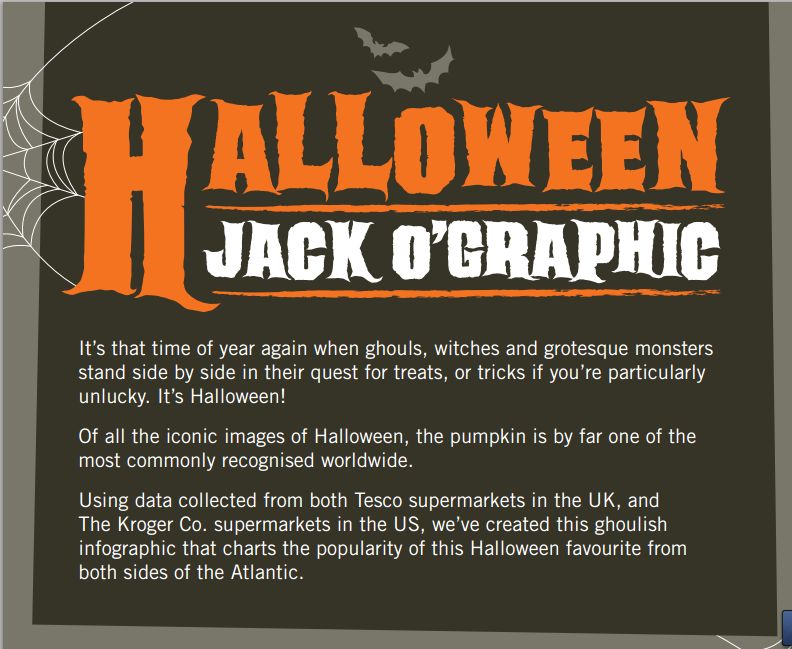 There are several scary things used during the Halloween celebrations. To be safe, few tips are to be followed that includes avoiding toxic paint, throwing out unwrapped candies, create a candy point and ensure that all glows sticks are in one piece. 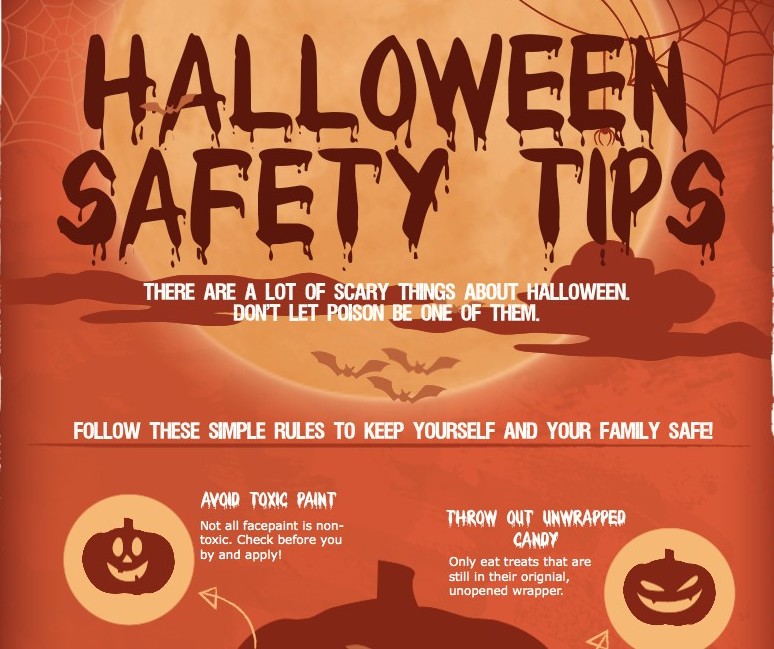 Every year in United States, 69% of people celebrate Halloween eve and spends more than $ 11.7 billion to purchase costumes and organize parties. 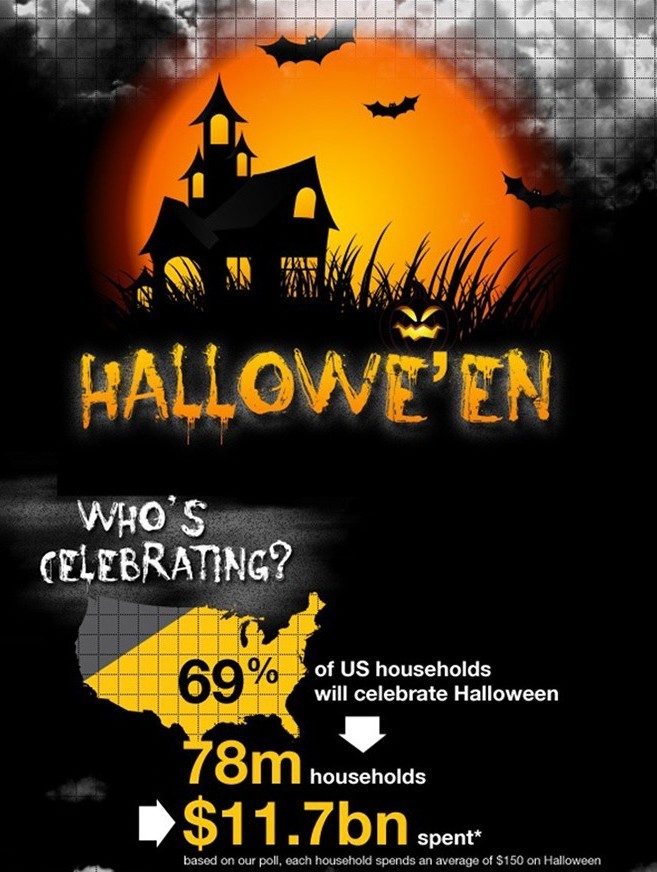