Cricket is a game played between two teams of 11 players each with bat and ball. The game of cricket is played on a rectangular field with 22 yard long pitch. Both the teams are given chances to bat player by player, while the other team fields. Every batsman is allowed to bat, until he is out and when the whole team is out or the decided ‘overs’ are completed, it is declared as the end of the first inning.

The other team bats the next, which is entitled as second innings. The team that made the maximum runs or prevented the maximum players from getting out wins. If the batsman hits the ball and the bowl crosses the boundary by touching the ground, it is consider as 4 runs. However, if similar thing happens with just the ball crossing the field through air, it is considered as 6 runs. A total of 100 runs made by a player are given as a century.

Powerplay were another game strategy that was designed to add excitement in the one day matches. It is the process of introduction of a block of overs for granting some temporary benefits to the team who is batting by the implications of some restrictions on the fielding team.

Facebook is the most popular social networking site that saw most of the action of T20 matches, till date. The maximum growth was witnessed by Kings XI Punjab team after the launching of their ‘Awwal Fan’ contest. However, the maximum numbers of likes were obtained by the Mumbai Indian teams, i.e. 2.95 million likes.

England was never beaten by any team unless the Australian team visited the country and played the match in year 1882. England won 44% of the total matches played between the two teams. In the matches among the two countries in 1948, it was a moment to remember when Australian Batsman Don Bradman required just four runs to win from the innings to make the final century of test matches of his career. However, he was cut short by the leg spinner bowler of England named Eric Hollis. 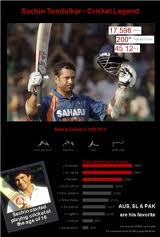 N. Sirinivastan paid an amount of $91 million for buying the franchise of the tam in year 2008. The sponsor of the game is Aircel and the apparel sponsor is the Rebook. The team played 80 matches and had won 33 matches. 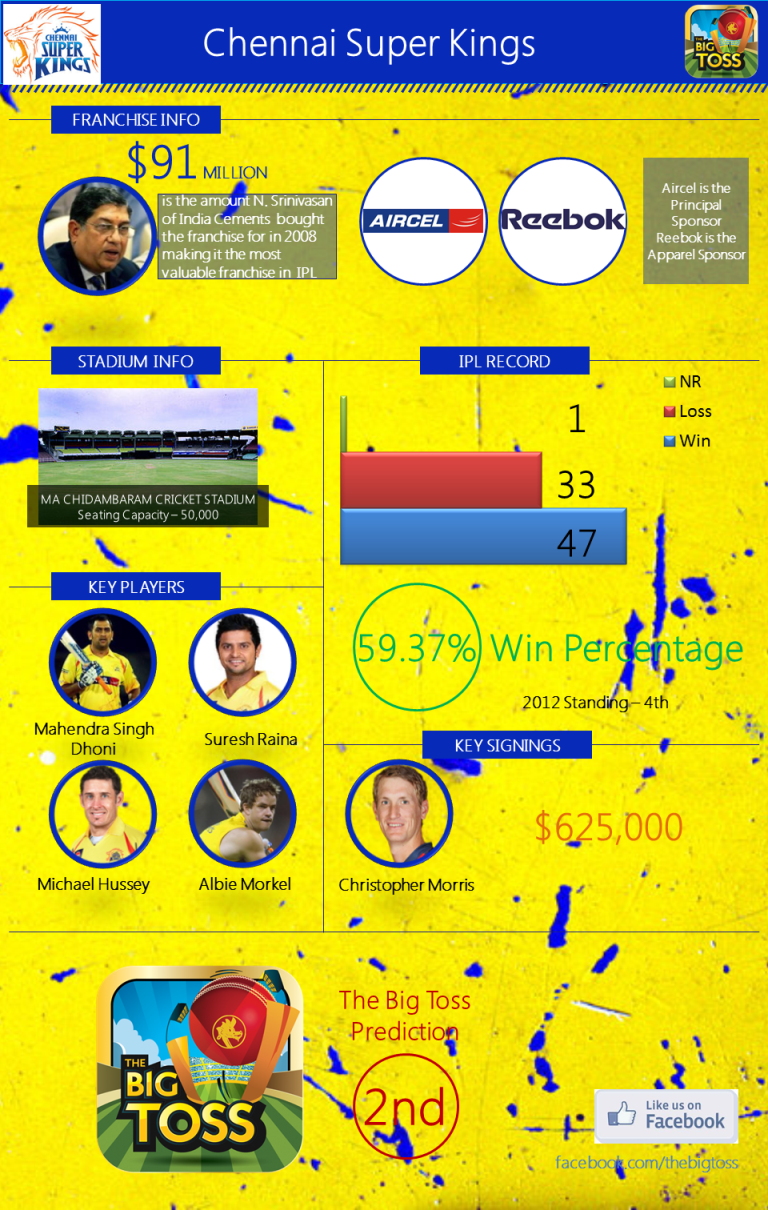 Shahrukh Khan and Juhi Chawla bought the team by paying an amount of $76 million in year 2008. The team played a total of 72 matches and had won 36 matches. Nokia is the sponser of the team and the apparel sponsor is the Reebok. 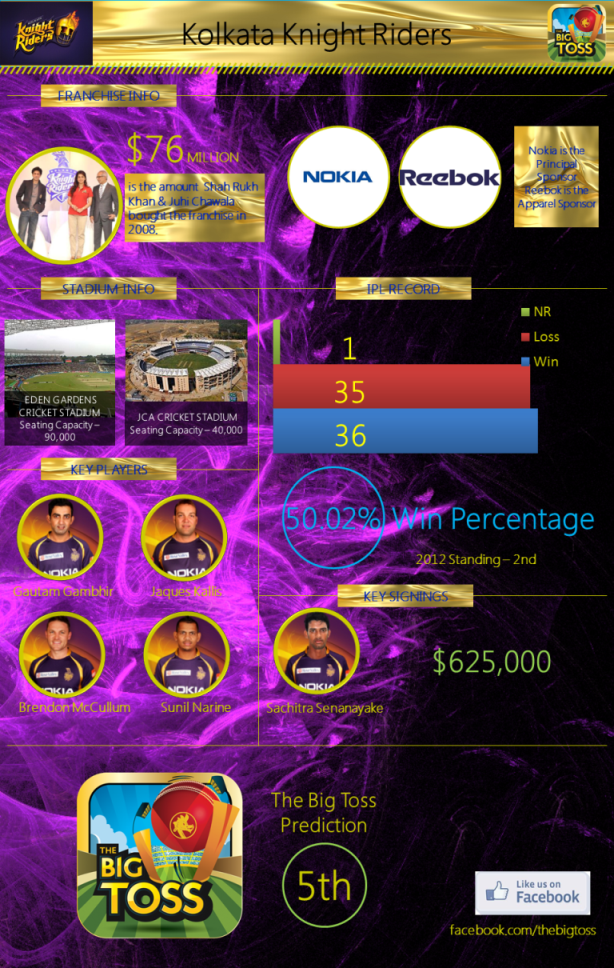 Two groups of team played for the Champion’s Trophy. Group A includes Australia, England, New Zealand and Srilanka. Group B included the countries of India, Pakistan, Russia, West Indies. Group A won the Semi 1 series while the second series was one by Group 2. The ODI ratings suggested that India played 38 matches, England played 33 matches, 37 matches were played by Australia, and Pakistan played 36 matches while West Indies played a total of 33 matches.

Mukesh Ambani and Nita Ambani paid an amount of $112 million to buy the franchise of the team in year 2008. Hero is the sponsor of the team and adidas is the apparel sponsor. The team played 76 games and had won 33 games. 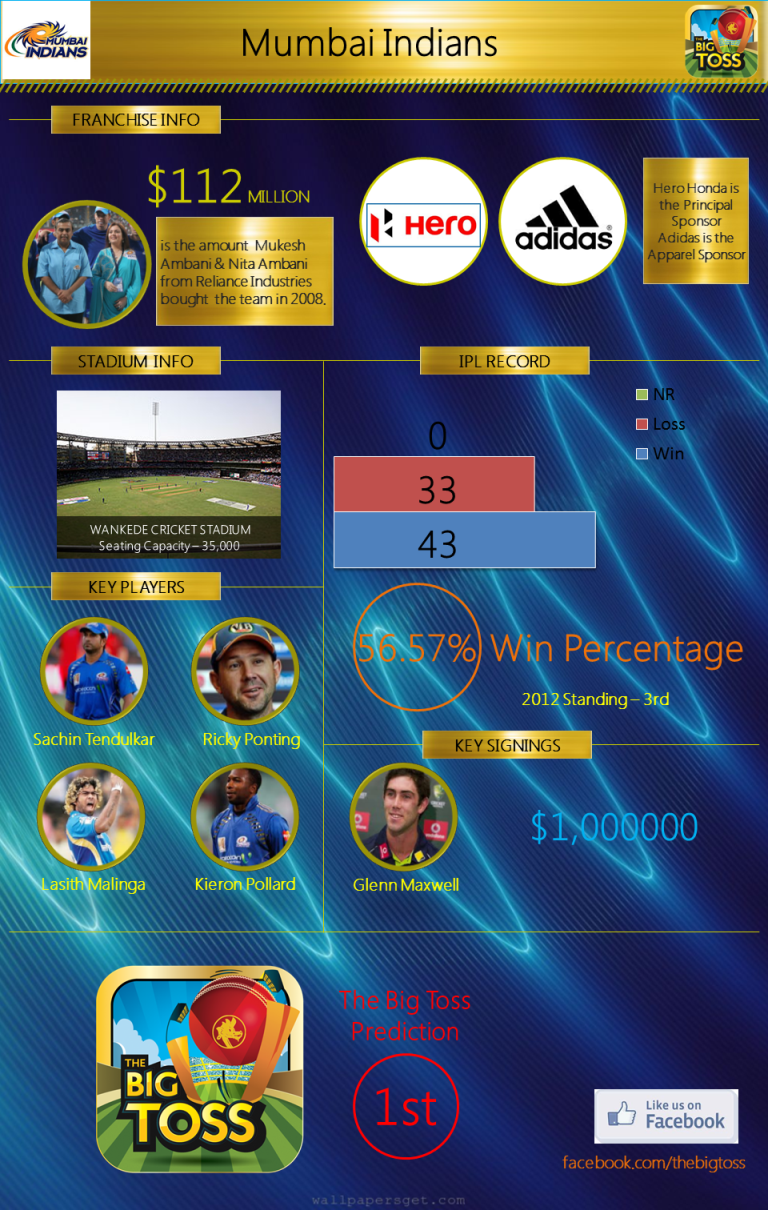 Sachin scored 13,557 runs in 100 innings. He had scored a total of 51 centuries in the test matches and 49 centuries in the one- day international matches. Sachin missed the opportunity of making a century 28 times by getting dismissed in his 90s runs. Year 1998 is considered as his best year as he made 12 centuries in that year.

Deccan Chronicle paid an amount of $107 for buying the franchise of the team in year 2008. The sponsor of the team is make my trip and the apparel puma sponsor. The team played a total of 75 matches and had won 46 matches. 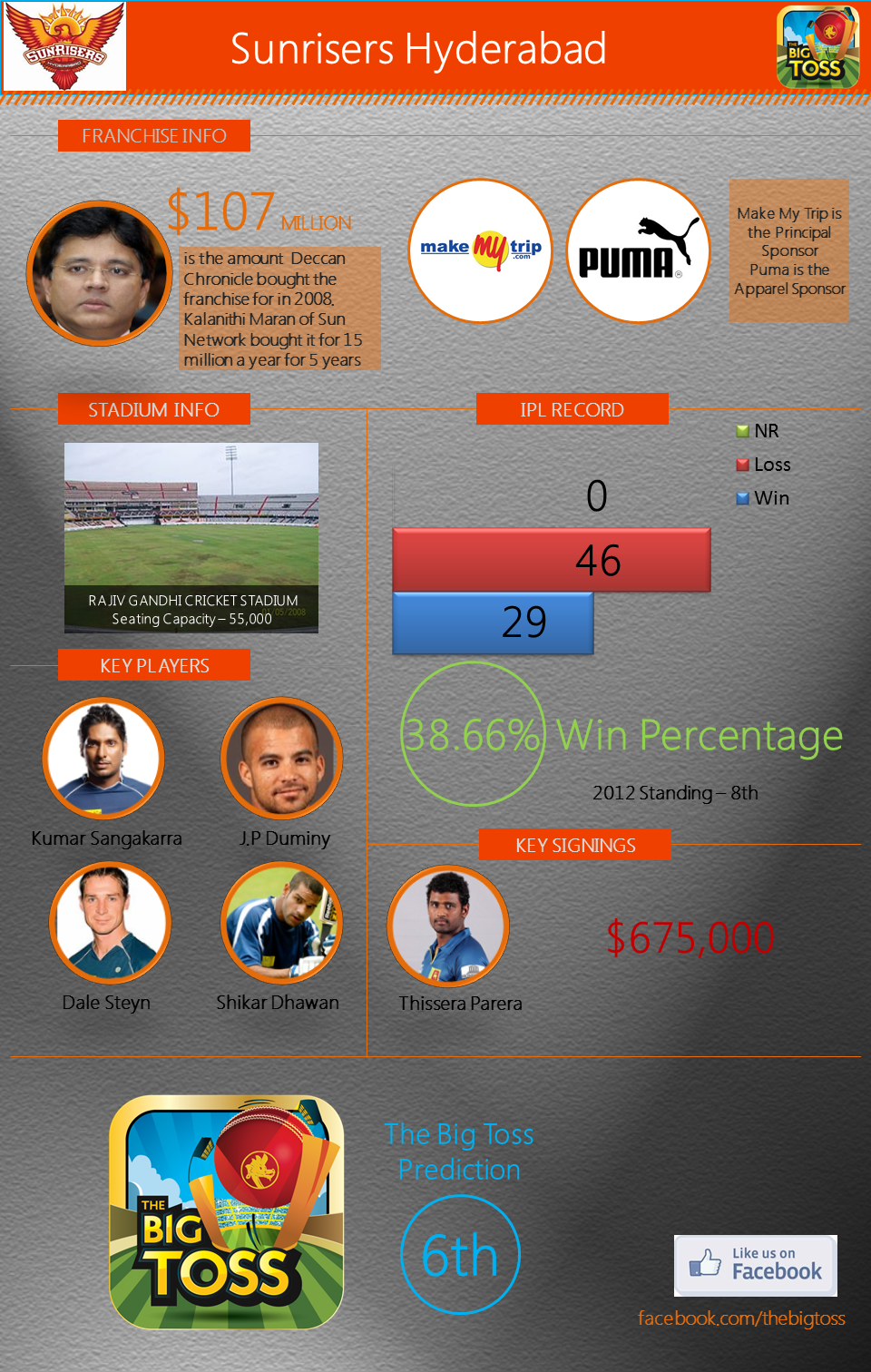 11. Unfolding the Foundation of Cricket

Cricket is the second most popular game in the world after football. The terminology ‘Cricket’ was extracted from an ancient French word ‘creckett’ which means stick. History witnessed the first mention of playing cricket in year 1611, when two adults had to face prosecution for playing cricket instead of going to the Sunday church.

Vijay Malaya paid $112 million to buy the franchise of the team. Mc Dowells is the sponsor of the team while, Reebok is team’s apparel sponsor. Their home stadium is the Chinnaswammy cricket stadium. The key players of the team are Virat Kohli, Christ Gale, AB De Villiers, M. Murlitharan.  The team had played a total of 77 matches and had won 39 of them. 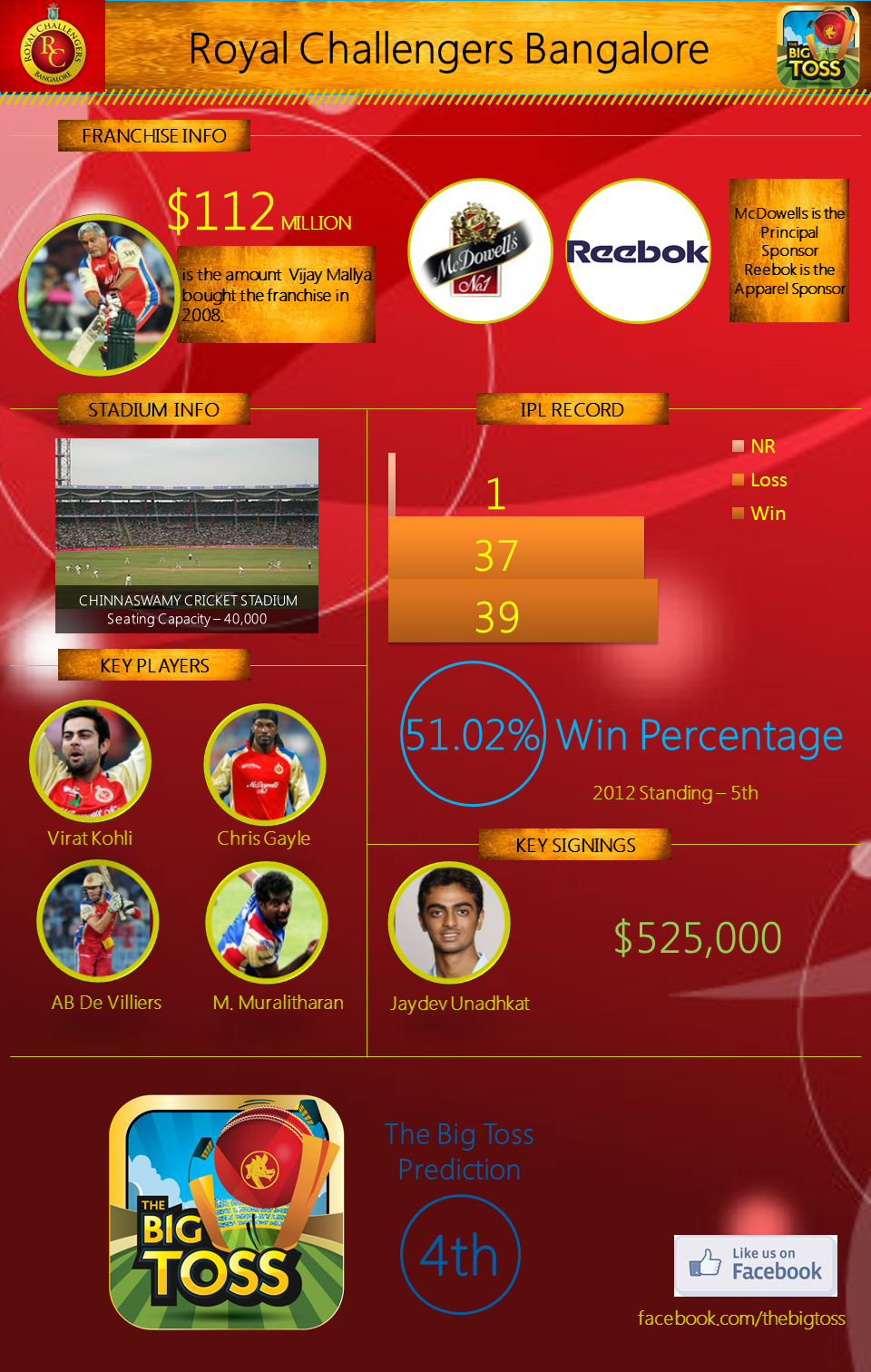 There was a time when the cricket team of Australia was ruling the world of cricket. However, in last few months the scenes have turned vice-versa. The most shocking game had been played by Shane Watson with an average run rate of 35.34. The average run rate of most of the players remained, 19.91, 22.02 etc.

The GMR group paid $84 million for buying the franchise of the team in year 2008. Muthood Finance is the main sponsor of the team while the apparel of the team is sponsored by Adidas. The team played a total of 74 matches and had won 39 of them. 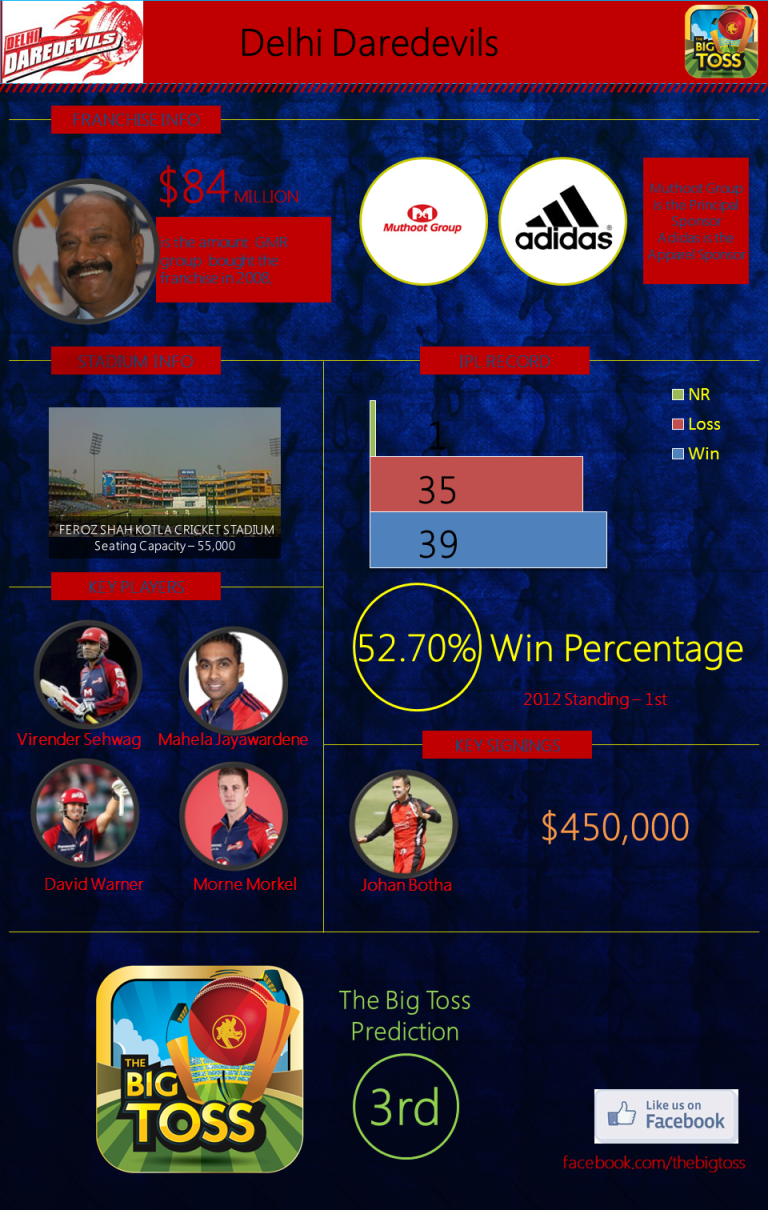 Preity Zinta, Karan Paul ( Apeejay Surendra group) and Mohit Burman ( Dabur) bought the franchise of the team for $76 million. Videocon is the sponser of the team while OCM suiting is the apparel sponsor of the team. The home stadium of the team is the Punjab Cricket stadium. Adam Gilchrist, David Hussey, Shaun Marsh and Azhar Mehmood are the key players of the team. 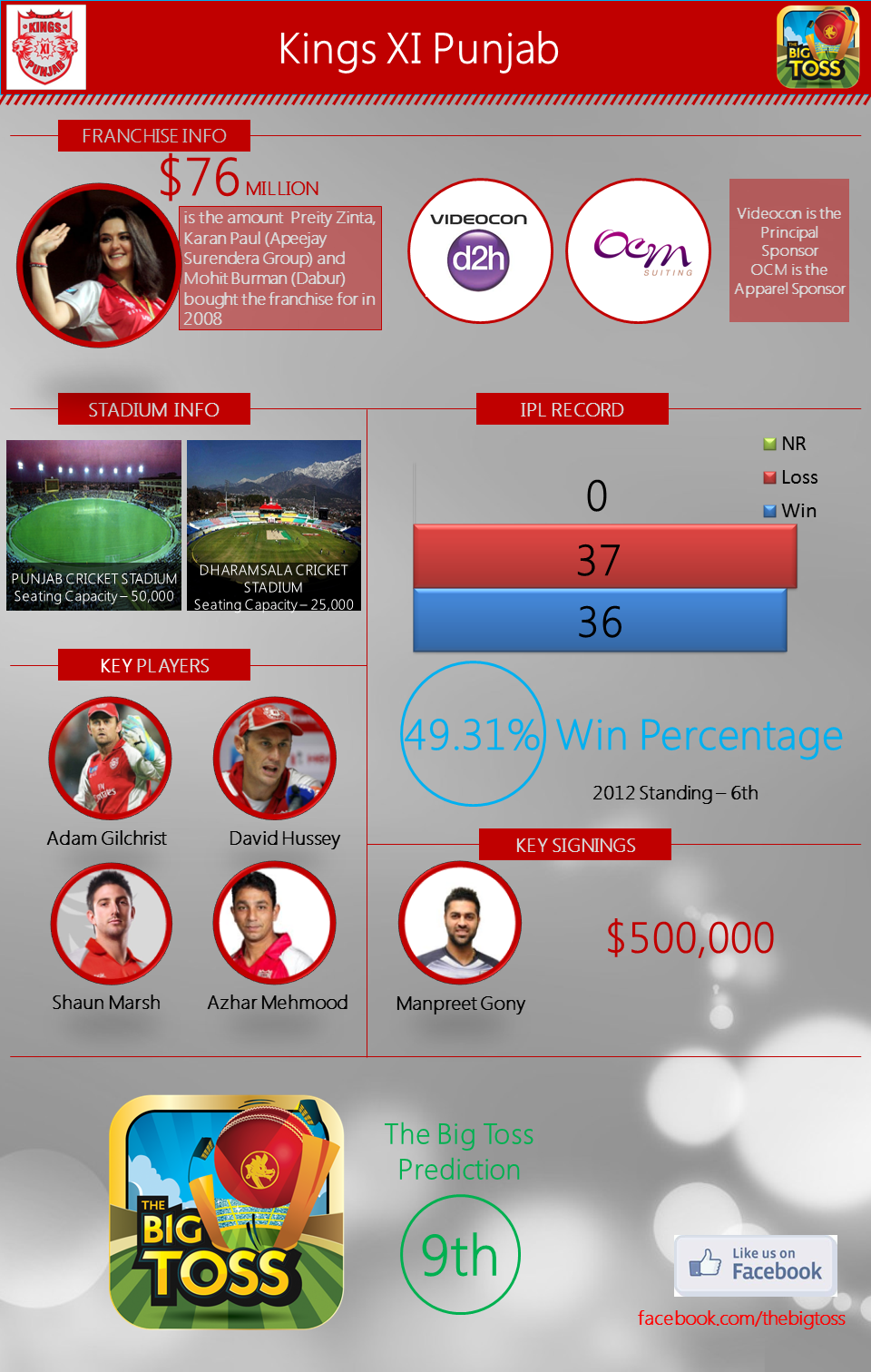