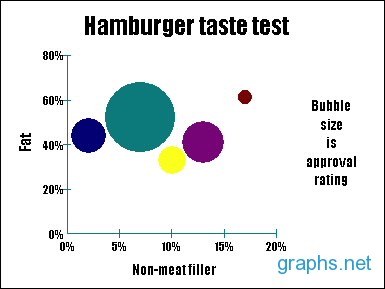 Graphs are used to visually represent data in a more digestible form. There are different kinds of graphs using different geometrical shapes to show the data, from lines to dots to bars and pies. In most cases, graphs represent data based on two variables, and these variables are plotted along the horizontal or x-axis and on the vertical or y-axis. One such graph is called a scatter graph or plot, where dots or small circles are placed on the graph where the corresponding x and y values intersect.

However, there may be instances when the data being represented relies on 3 values rather than simply two. In cases such as this, another kind of graph can be used. A bubble graph is a type of scatter plot that uses bubbles instead of dots in order to represent a third value. The bubbles either vary in size or in color depending on it's particular value. For example, one bubble that is twice as big as another can be interpreted to have twice the value of the smaller bubble. Or the redder a bubble is, the higher the temperature of the item it represents.

While a bubble graph allows one to represent three values, overcoming the limitations of 2-axis graph, it does have some limitations. One is that values represented by bubbles are relative to other bubbles and are not as accurate compared to plotting along the x and y axis. Another limitation is that a graph representing too many data points will tend to get crowded with a bubble graph. In this case, a 3D scatter graph may be more efficient.