Having knowledge of alcohol and its effects is quite important for drinkers. If you wish to know more about alcohol, then you must read the following:

The top five states in the US with the highest alcohol tax revenue are North Carolina, California, Texas, Florida and Pennsylvania. The top holidays that are considered tipsy in the US are New Year’s Eve, St. Patrick’s Day, Thanksgiving Eve, Derby day and Fourth of July.

At the first level of alcohol content in blood, an individual appears normal while at the third level the changes that can be seen are disinhibition and extroversion. Between the 4th and 7th levels, an individual might have emotional swings, a super human feeling and decreased libido. After the 10th level, a person might get unconscious and even die.

Lot18 is a leader among a growing number of startup online wine companies. A flash wine sales site chooses a selection of wines for its customers and functions on the first come first serve basis. Lot18 got 766 views in January 2012.

The biology of a hangover

The common symptoms of a hangover are diarrhea, loss of appetite, trembling, nausea, fatigue, anxiety and difficulty in sleeping. 75% of the alcohol consumers have experienced a hangover atleast once while 25% of the college students feel the symptoms on a weekly basis.

The truth about alcoholism

In the US, about 15 million people are currently affected by alcohol abuse or dependency. In Wisconsin, 7.4 % of the population drinks alcohol making it the state of most heavy drinkers. The lowest rate of alcohol abuse in the US is in North Carolina where only 5.97% of the population drinks alcohol. Alcohol is estimated to cause 20-30% cases of liver cancer, motor vehicle accidents and Epilepsy.

It generally takes five to seven drinks in four to six hours to cause a hangover for a light to moderate drinker. It is advisable to eat a full meal before drinking and drink a lot of water to keep yourself hydrated. One must drink in moderation and take aspiring or multi vitamins after drinking. 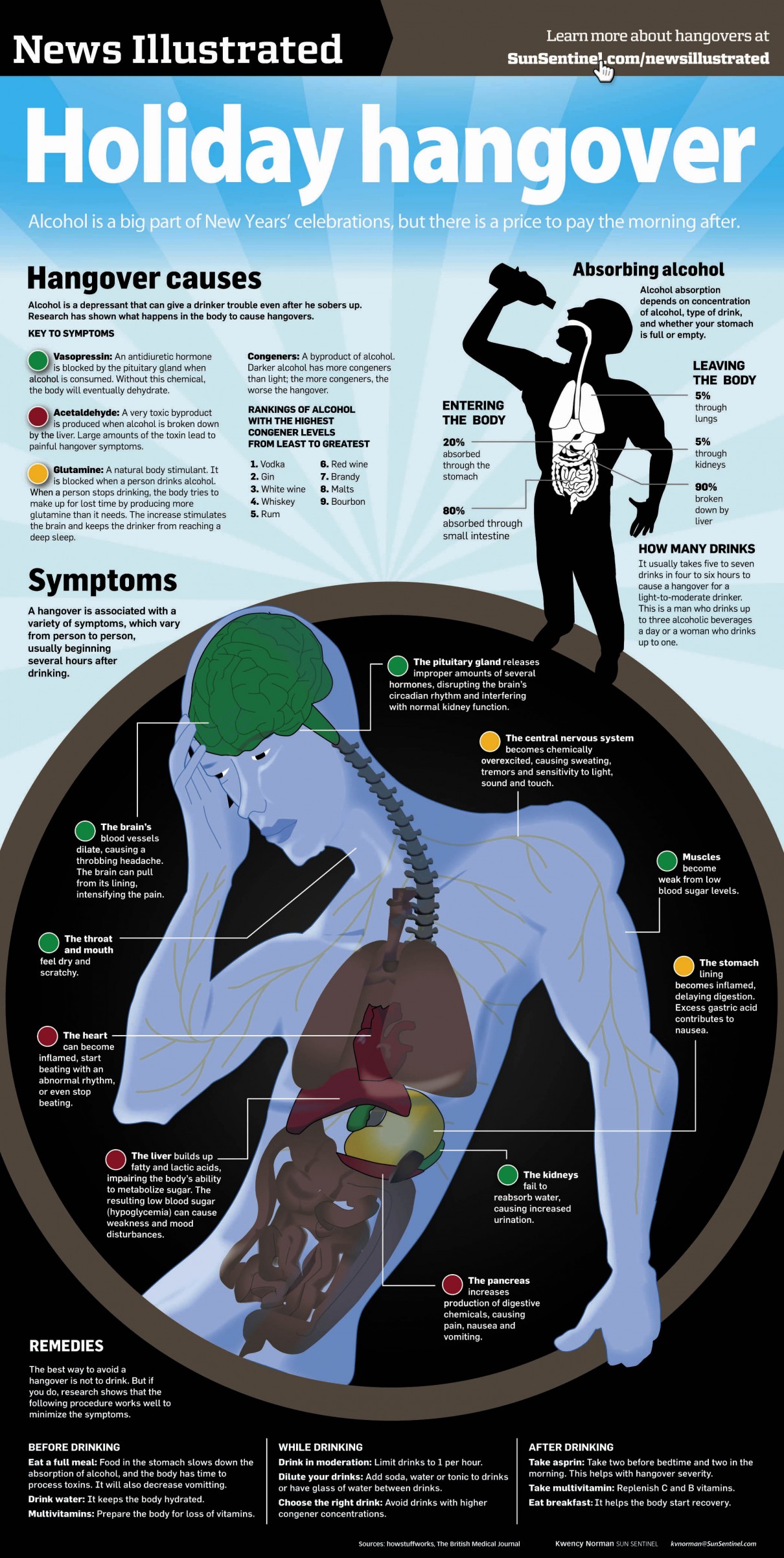 How much alcohol can I drink?

The science of getting drunk

Some physical signs of drunkenness include slurred speech, memory lapses and falling down. One feels shaky and sleepy after being drunk because of low blood glucose levels which cause tiredness. The toxic effect of alcohol can cause inflammation of the Esophagus that causes heartburn.

One must keep in mind the following points before serving alcohol: