Autism is the neurological disorder that may have spectrum of disorders like autistic disorder, Asperger syndrome and pervasive developmental disorder. At times it becomes hard for the families to manage a person suffering from autism.

The common signs of Autism are repetitive behaviour, difficulties in social interactions and trouble during verbal and nonverbal communications. In most of the countries people who are autistic are not getting sufficient support to manage their own financial needs.

Very few people who are autistic are able to get a suitable job and most of them are dependent on their families.

1 out of 88 children in US are diagnosed with autism though numbers may seem alarming to many but these are still lesser than the numbers of many other diseases like Asthma, diabetes and ADHD. Autism is a group of neuro-developmental disorders.

2. The Numbers Behind The Autism "Tsunami"

1 in 50 students in United States have autism which makes it countries fastest growing developmental disability. The treatment for autism is quite expensive and the cost of treatment varies from place to place. Caring an autism person all through his/her life could cost almost $3.2 million of expenses. In the year 2000 1 in 150 children were identified with Autism spectrum disorder.

3. Autism What We Know Today

Autism is the neurodevelopment disorder with a strong genetic component and the occurrence of Autism is increasing really fast. In last couple of years the rate of autism has increased in children. The annual growth rate of autism is 10-17% which makes it a very fast growing developmental disability.

Autism is basically a spectrum disorder and children with autism may experience following difficulties like lack of social and emotional connections, difficulty in imaginative play, repetitive pattern and difficulty in transition. School aged boys have 4 times higher chances of becoming autistic as compare to school aged girls.

Autism is the fastest growing developmental disability and 39% of people do not realise that there are no cure available for autism. 60% of adults who have autism rely on their families for the financial support. 71% of children with autism have mental health troubles and 27% people believe that autism only affects children. 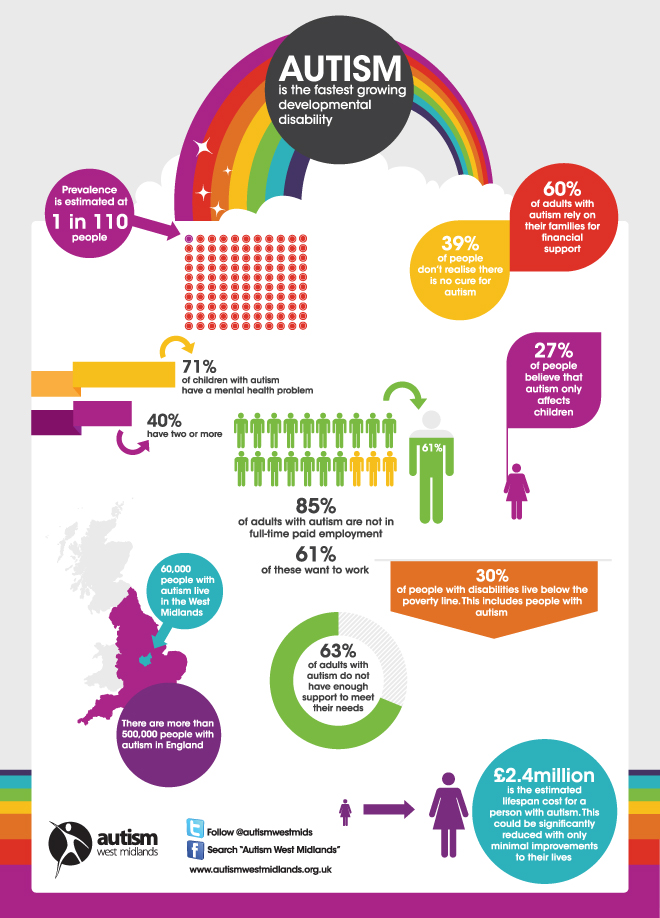 6. Facts about Autism in UK

1 in 100 people suffer from autism in UK and every 2 adults out of 3 who are suffering from autism do not have enough support to meet their daily needs. 1 out of 3 people suffering from autism in UK are facing various mental troubles due to lack of support. Only 15% adults who have autism are employed where as 61% who are unemployed say that they want to work. Almost 51% adult in UK have spent their time without a job or access to support system.

7. Team Up For Autism

Autism is a rapidly growing disorder and the early diagnosis and intervention can reduce the cost of the treatment to many folds for every 2 out of the 3 people having autism. A lifespan autism cost for an individual in $3.2 million. 60% of this cost is spending on the adult services and in the US itself only 8% of the companies hire employees with any kind of disability. The children who are born in US in the year 2007 with autism have very less chance of avoiding poverty.

Almost 1,500,000 Americans have autism spectrum disorder and almost 1% of American children who are aged between 3-17 years are having autism. Autism has seen 10-17% growth in last couple of years that has made it a fast growing developmental disorder.

Cord blood has become a very sound treatment option for autism and latest research with cord blood banking has shown lot of positive response. As compare to year 2000 the diagnosis has autism has become 78% times more effective.

Autism is a neurodevelopment disorder that affects the learning of every individual in a different way. Most of the early signs of the disorder are seen in the first 3years of the life. 1 in 110 births in US are affected by autism and 1 in every 70 boy in US has autism. Autism affects the ability of a brain to process the information by affecting the organisation and synapses of the nerve cells. There is no treatment available for autism but early diagnosis and intervention can help in improving the condition to a great extent. Some of the early signs of autism are lack of delay in development of language, less interest in peer relation, lack of eye contact and fixation on parts of objects.

12. History Of Autism in The United States

Music techniques like instrumental playing, singing and movement to music helps in the developmental aspect of an autistic child. Music therapy can increase appropriate behavior in autistic children in term of their social interactions.

Wandering away is very common in children with autism and there has been many cases in past where children have gone missing for a significant period of time. Children who may wander could have close call with traffic signals and may have high chances of drowning.