Cats Vs Dogs: Cats and Dogs are the two of the favourite pets that people like to keep with themselves but the war between them is in existence since eternity. Cats Vs Dogs, the war is endless and each one of us has our own view points in favour of them. To know both of these lovable pets closer we will move forward towards this article.

Some facts about Cats and Dogs

Both cats and dogs have been the favourite pets of people since a long time but if we compare them then dogs who are the descendents from wolves definitely stands a better position as they have known to be domesticated for around 14,000 years as compared to cats who belong to the felidae family are known to be domesticated for around 7000 years. Some of the other basic facts about dogs are that they have a better sense of smell, are omnivores and have nose prints that are as unique like the finger prints of human being.

On the other hand, the cats have a better sense of hearing as compared to dogs, are carnivores and their urine smells worse than dogs.

The debate as to which is a better pet when dogs and cats are compared is never ending. Benefits of keeping a dog are that you can take them for long walks, they can be trained and they are excited no matter whether they see you after 5 minutes or 5 days. On the other hand, cats can take care of themselves for a period of more than 24 hours, they can give themselves a bath and they save your money on mouse traps.

Besides benefits, there are some limitations that are associated with these pets as well. While keeping a dog as a pet, one has to ensure that they need regular exercise, rain and shine, they can chew your personal belongings and they can also spoil your backyard by digging it. Cons of keeping a cat are that they need an indoor bathroom, they can use your couch as a climbing wall and moreover if they are offended for a long period they may ignore you.

No matter whether you keep a dog or a cat as you pet, both of them will surely provide you enjoyment as well as companionship.

Statistics of Dogs and Cats

The type of pet that a person keeps at home helps to assess the personality of the owner. In US, around 39& of the households keeps at least one dog and 33% of the household keep at least one cat as pet. It is generally seen that people living in the apartments and in the urban areas, prefer to keep cats as their pets whereas the families in the suburbs prefer dogs who can play with their kids. Some of the famous cat lovers are Winston Churchill, Mark twain, Snoop dog and Nostradamus and the list of personalities who preferred dogs include George Washington, Queen Elizabeth II, Pablo Picasso and Martha Stewart.

The type of pet that a person keeps helps to assess their personality to some extent.  A study reveals that dog owners who are generally male are considered to be 50% more conservative and 30% more are likely to live in the rural areas, 15% more are extroverts and 11% more are aware about their neighbour’s name.

Talking about cats, their owners are more of females, they are liberal, 11% more likely to be introverts and 14% of them are likely to cling to their friends at the party.

Importance of pets in everyday lives 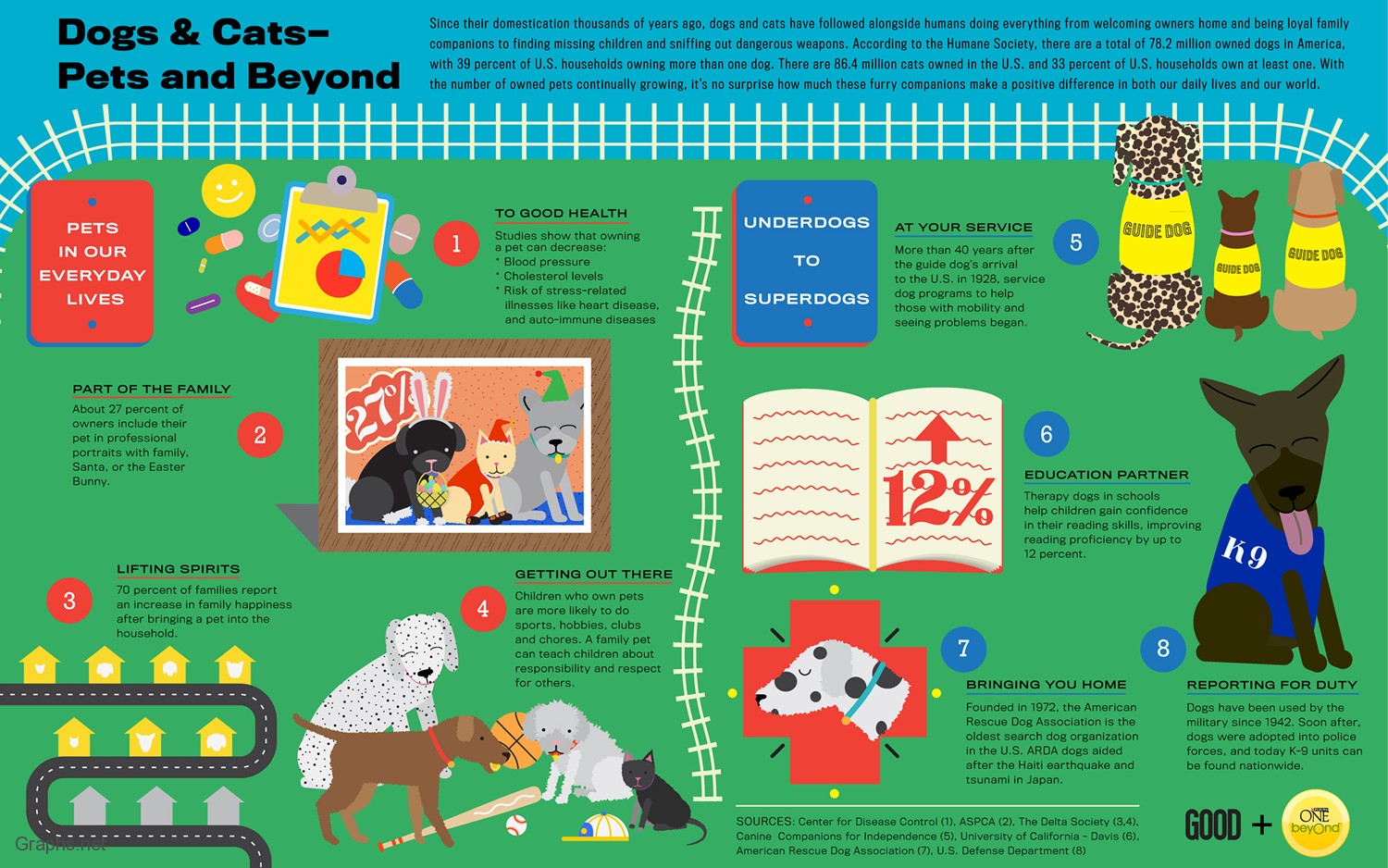 Pets hold a very important position in our everyday lives.  Studies have shown that keeping a pet improves health as they helps in keeping check on cholesterol levels, blood pressure and reduces the illness related to stress like auto immune diseases and heart diseases.

Spay and Neuter your pets

Spaying and Neutering of cats and dogs are very important so as to reduce their overpopulation and to give them a longer, happy and healthy life. Neutering is the process of castration done on a male animal whereas spaying is ovariohysterectomy of a female animal.

The type of pets that a person keeps also helps to know their inclination towards technology to some extent. The dog owners are known to be 12% more early adopters, 23% more iPhone users and 36% more likely have their ringtone as a popular song. On the other hand, a cat owner is 7% more likely to be Android user, will wait to buy the technology till it proves itself and 11% more are likely to keep their contacts safe in their phones as well as address book.