Candy is loved by adults and kids alike. Most candy in the U.S. is consumed during Halloween, with Easter in the second place. And, according to surveys, most children prefer chocolate compared to hard candy.

How the Candy Industry Started

Perhaps the oldest candy was when cavemen started drying honey for consumption. The earliest candy was made by the Mayans and Native American tribes who used to dry a sap to make a chewy-type of candy. Today, the leading candy manufacturers are Mars, Nestle and Cadbury.

Nestle’s Butterfingers has a whopping 515 calories; M&Ms have 440 calories; Snickers has 280 calories; Twix 250 calories and the Juicy Fruit chewing gum has just 5 calories, which is even less than a lollipop, which has about 60 calories.

Teens and Their Love for Candy

8 percent of teenagers love Kit Kat; while just 4 percent love M&Ms. Just 1 percent teens claimed that they did not eat candy, while 41 percent said that they ate candy few times a week. 23 percent teenagers buy their candy from corner stores or gas stations and 44 percent from grocery stores. Most teens seem to prefer chocolate over sweet candy.

During Easter, Americans purchase a whopping 120 million pounds of candy. Due to the high demand, 16 million jelly beans are made specifically for Easter. Nearly 70 percent of the candy that is bought for Easter is actually chocolate. While Halloween tops as the holiday season when most chocolate is consumed, Easter is not far behind with people consuming 71 million pounds of chocolate.

While there are many Halloween candy tampering myths, some of them are facts. For instance, the cyanide laced Pixy Stix in Houston, Texas which caused the death of an 8-year old. Even the story about needles being found in Snickers in Minneapolis in 2000 is a fact, as it was done by a person, who then handed out the Snickers to children during Halloween. When a little girl in Vancouver, Canada died after eating candy got during Trick or Treat, there was a rumor that the candy was poisonous. However, it was not, as the girls had died of non-contagious sepsis-causing bacterial infection.

Snickers, Reeses, M&Ms, hot tamales, and Skittles are among the most popular candies during Halloween. While the least popular are candy corn, orange and black taffy, Smarties and hard candies.

How Much Candy People Eat During Halloween

In 2010, 24.7 pounds per capita candy was consumed. 41 percent adults admitted to eating candy from their own treat bowls. 52 percent of people offering treats to kids during Halloween actually pass out chocolate. 90 percent parents admitted that they took candies quietly from their kids trick-and-treat bags. 68 percent kids love going to homes that hand out chocolates during Halloween.

52 percent of people hand out chocolates to kids during Halloween. 90 percent parents sneak candies from their kids trick-or-treat bags. 62 percent people actually hand out the chocolates they like personally to trick or treaters. 26 percent hand out king size chocolate bars to the kids. 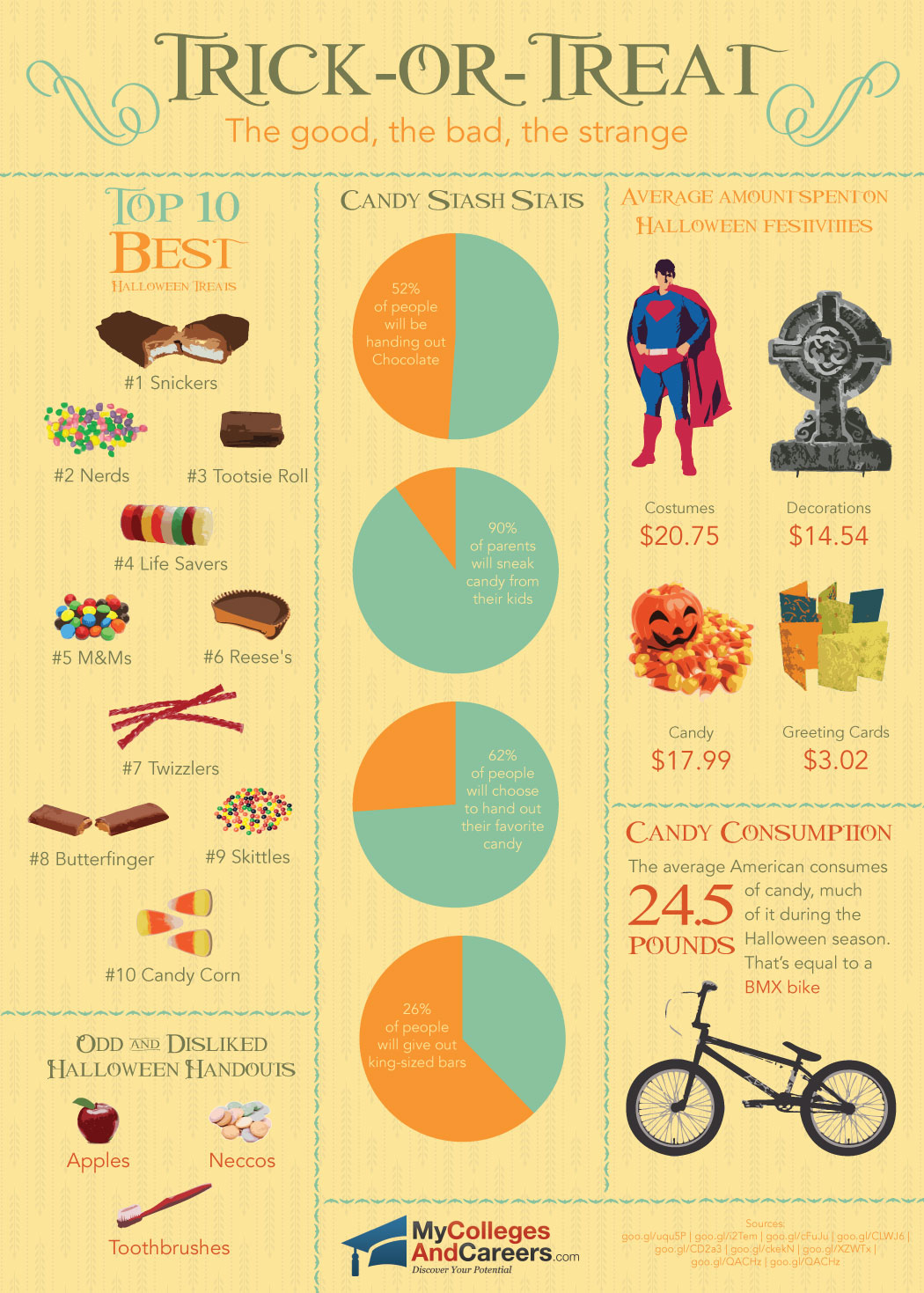 Ringpops were made to stop the maker’s daughter from sucking her thumb. M&Ms red, green and yellow peanuts were only added in 1960. The longest Redvine in history was a whopping 40 feet in length.

The three steps of CRM for candy companies are acquiring customers, enhancing their products and retaining their customers. Pez followed this and has become a successful candy company. As did other candy companies, such as M&Ms, which is the best selling candy in the US, and Jelly Beans, which produces 34 million pounds of jelly beans every year.

The popular game called Candy Land was developed in 1945 by Eleanor Abbott. It was published in 1949 by Hasbro. However, it was only in 1980 that the well-known characters that most people know today were introduced. 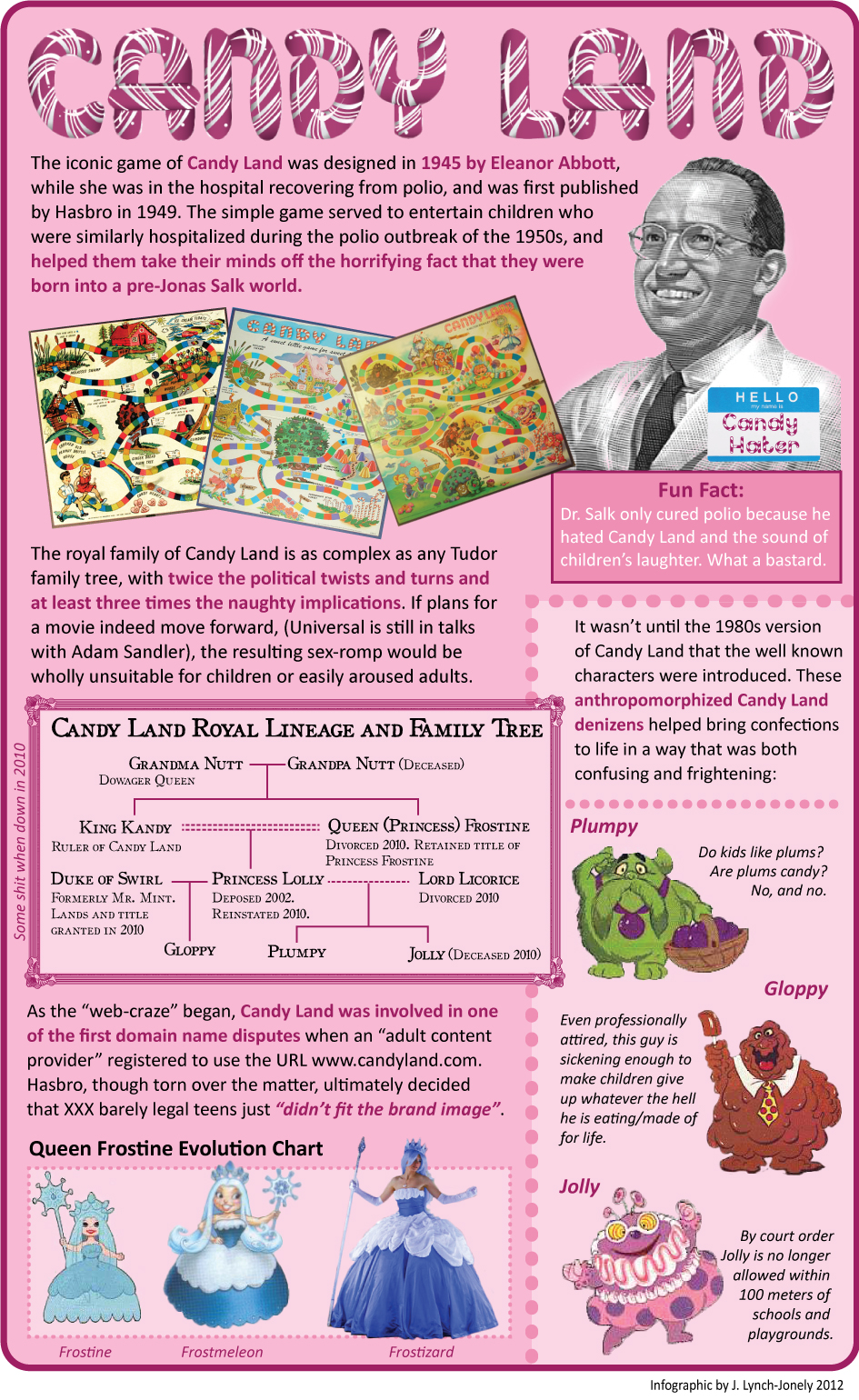