Here are some facts about Bing and how it is growing as a search engine. If it continues to grow the way it has been doing, it will give serious competition to Google in the coming years.

Why is Google Doing Better than Bing?

When you compare Google and Bing, you will realize that Google offers more services. Google is translated into 124 languages, while Bing just 40. Google has a bigger market share, with 89.4 percent users, while Bing has just 1.1 percent of total users. Google offers services like online books, photo editing, opening documents online via Google Docs and video platform via YouTube, which are not offered by Bing.

The top three search engines today are Google, Yahoo and Bing. Google has the largest chunk of the market with 65.09 percent, followed by Yahoo at 15.89 percent, and then there is Bing with a market share of 13.10 percent. While Google saves substantially on the CEO compensation package compared to Yahoo and Bing, it offers higher pay packages to senior engineers. According to available statistics, while Google is the market leader in searches, Bing is growing quite fast. If this trend continues, Bing might soon offer serious competition to Google.

How Bing Performed in the First Year of Its Inception

The most searched celebrity on Bing was Michael Jackson. Users were using it to search for airlines, shopping and accessing social media networking sites. Without using brand awareness methods, Bing has managed to increase it from a measly 3 percent to a massive 65 percent. The most popular Bing home page image is a beach with a shipwreck located in Greece; and the most viewed photosynth was the devastation in Haiti. 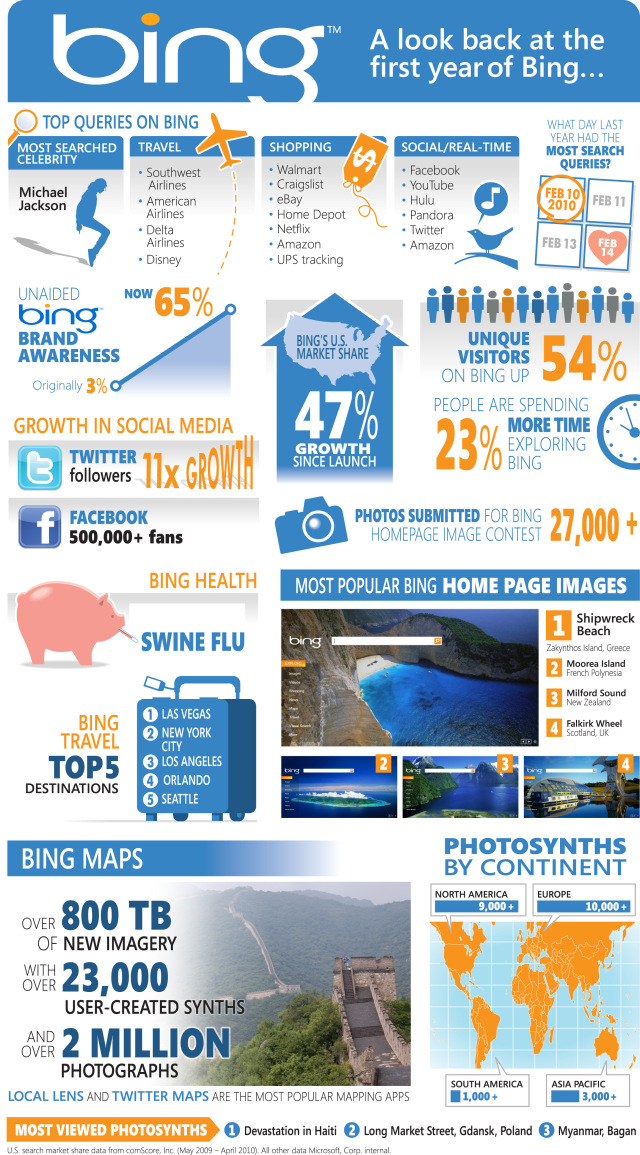 Google started out as BackRub in 1996 and was renamed to its current name a year later. By 2000, Google had more than a million URLs indexed in its database, surpassing all other search engines. By 2010, Google had a market share of 65.1 percent, while Bing had a market share of 11.7 percent. By 2012 Google’s market share was 66.4 percent and that of Bing was 15.3 percent. Besides their own search engines, both offer embedded searches in other websites; allow users to incorporate searches from their social networking sites; and semantic search to offer relevant results on search terms. While Google will still stay the market leader, Bing growth has been significant since it entered the search industry.

What did Canadians Search the Most on Bing in 2011?

A Comparative Study of Google and Bing

For the top SERP position, Google has a click-through rate of 18.2 percent, while Bing has a rate of 9.7 percent. For the second position, Google has a rate of 10 percent and Bing of 5.5 percent. The two search engines use different ranking factors, though some factors do overlap. It may sound strange, but more male users tend to use Google, while more female users are active on Bing.

The Evolution of Search

Before Internet came on the scene, people used YellowPages and telephone to search. Then in 1990 the first search engine called Archie was created in Canada. The following the World Wide Web was launched and in 1994 search engines like Lycos and WebCrawler were launched. Yahoo was launched as a web directory in 1995 and Google came on the scene in 1998. And within a span of 3 years it became a dominant force. Windows Live Search was renamed Bing and launched in 2009.

Some Startling Statistics on Bing Users

The Dallas Cowboys were the most searched sports team followed by Arizona Cardinals. Former cheerleaders are also quite popular, with Teri Hatcher, who was a cheerleader for San Francisco 49ers being the most popular. The most searched quarter back is Brett Favre. 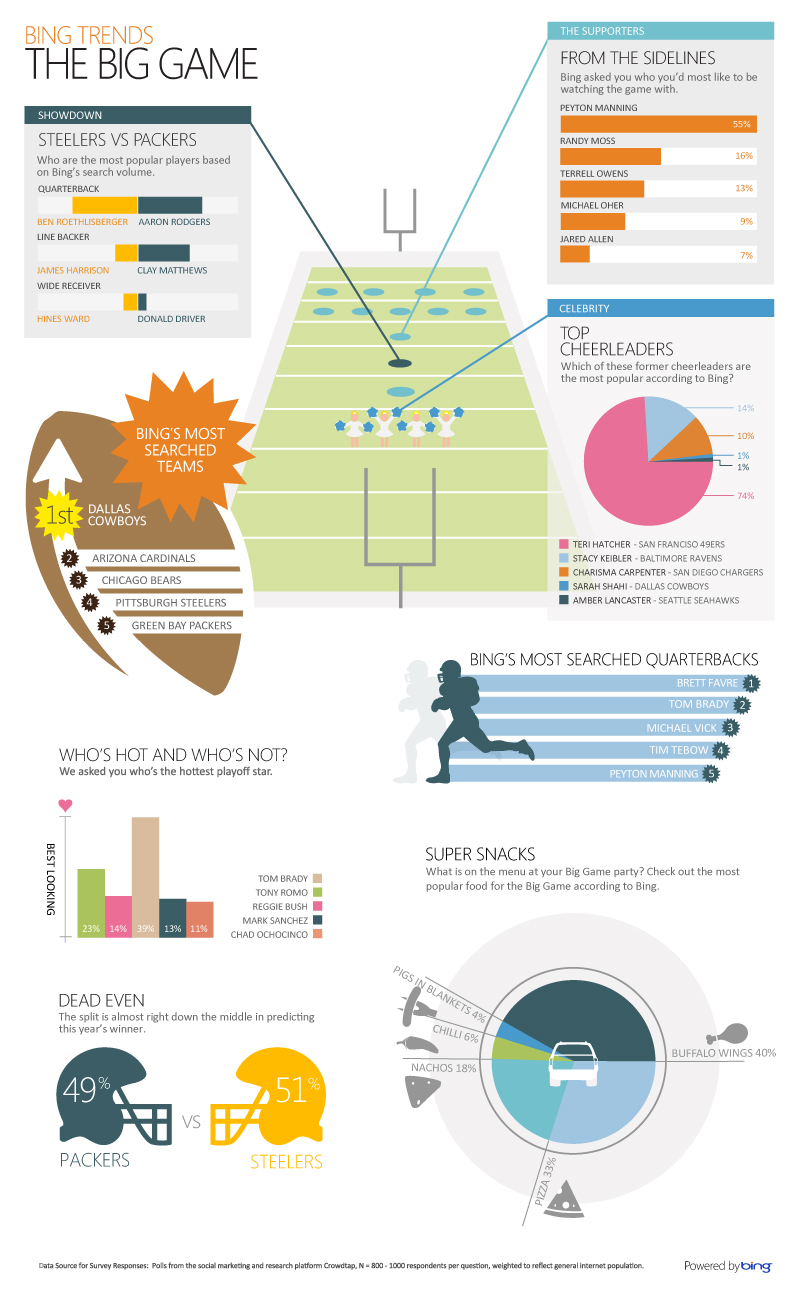 The Battle Between Google and Bing

While Google holds major market share in the US, Bing is second. If you compare revenue, Microsoft holds an edge over Google and has also managed to diversify beyond search. While Google has been using the same approach for the last 12 years, Microsoft has outsourced and experimented with its search engine, suffering major losses in the bargain.