The tea plant, Camellia Sinensis is the source of this aromatic beverage which is called as Tea, Teh etc. in various cultures around the world. Tea is the drink that is consumed at the number two position globally, the first one being water itself.

Pouring hot or boiling water over the cured leaves of Camellia Sinensis produces that exotically delicious smell of Tea which people all over the world love. Originally this drink was used for medicinal values in China, wherein it was presented before priests and merchants from Portugal during the sixteenth century.

In the seventeenth century, the British got hooked on to its taste and aroma and they then introduced it in India to take head on the Chinese monopoly over the product. Tea has a lot of health benefits and its regular consumption is known to prevent heart diseases, cancer, blood pressure problems, weight gain, bacterial and viral infections etc

1.4 pounds of tea is drunk by the United States each day and almost 3 billion cups are consumed each day by the entire world. Tea is one of the most popular beverages consumed by the entire world. 5 out of 6 Americans are tea drinkers and the maximum amount of tea is consumed by India and after that China is on number 2 when it comes to consuming tea. According to the latest survey 6 cups of tea each day can reduce the risk of heart diseases. 130 million pound tea is exported to United States each day. 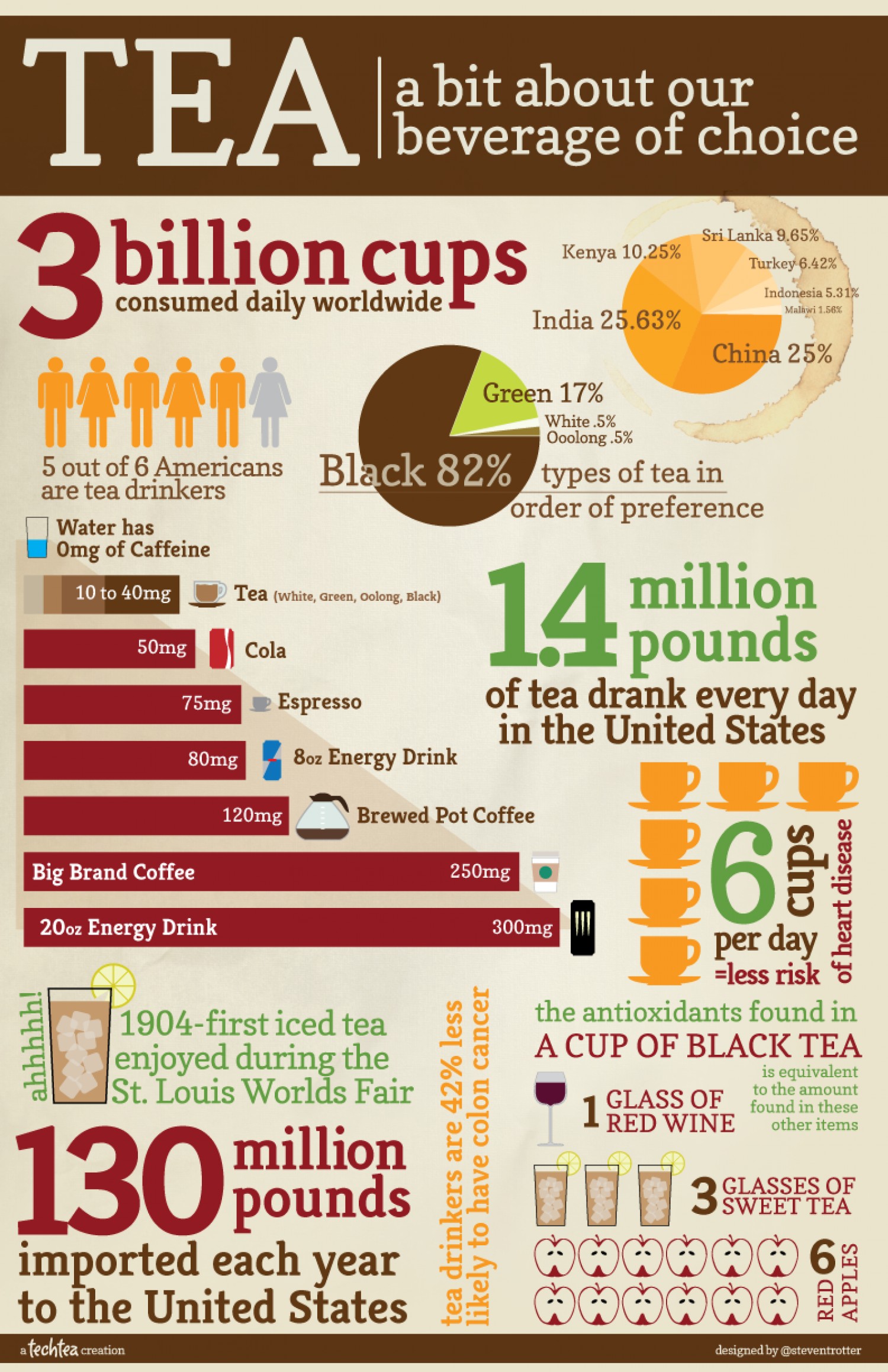 Tea is one of the most preferred aromatic beverages consumed by the world. Tea is prepared by pouring the hot boiling water on the cured dried leaves of the Camellia sinensis plant. Tea has a stringent, cooling and bitter flavour which is enjoyed by the people all over the world. Based upon the techniques and procedures used in preparing the tea it is classified in various categories. A most common type is white tea which is unoxidised and wilted. On the other hand yellow tea is also unoxidized and unwilted and it is allowed to be yellow. Some other categories of tea are green tea, black tea, oolong and post fermented tea. In the year 2010 the world production of tea reached up to 4.52 million tonnes.

3. Why Coffee & Tea Are Amazing Fr You

Coffee and tea are the most commonly used beverages all over the world. A hot cup of coffee or tea can wipe off all the tiredness. Some people are so addicted to these beverages that they cannot function without their daily dose of tea or coffee. Some of the studies celebrate these beverages where as some other claim that they are bad for us. Coffee has 80-185 mg caffeine per cup where as tea has 15-20 mg caffeine per cup. Coffee is prepared by the berry of an evergreen plant where as tea is prepared by the leaves of the plant. 52% of American adults drink coffee each day and the average coffee drinkers can consume 3.4 cup a day.

4. All About Matcha Tea

A highly concentrated form of green tea is called as Matcha and it is packed with loads of minerals and vitamins. Matcha has very high level of protein which is almost 289mg per cup. It also has a very high amount of vitamine C, calcium, iron, fibre and potassium. Matcha contains 137 times more antioxidants than the regular green tea. On the survey done on 710 people consuming Matcha more than 60% experienced better hair, nails and skin. The caffeine levels in Matcha are much less as compare to regular coffee or tea. This specialised tea has a capacity to burn calories without doing any exercise. People drinking Matcha feels lighter and rejuvenated for a longer period of time.

51% of Americans are drinking tea at any point of day and 85% of tea consumed in America is iced tea. 85% of tea consumed in America is black tea, 14% is green tea and only 1%is white or oolong tea. 65% people in America use tea bags, 25% use ready to drink and iced tea mix where as 10% people use instant or loose leaf.  All kind of tea comes from the same planet Camellia sinensis the difference is in the way the tea is being processed. Tea has numerous health benefits like burning the calories, regulate cholesterol, rich in antioxidants, boosts immune system, fights with bacteria and viruses and also fights cancer and many other kind of heart diseases.

In the 5th century tea was used as a remedy for many medical conditions due to the health benefits attached to it.  Tea is the most widely consumed liquid in the world after water. Asian countries like China, India, Indonesia and Sri Lanka are great producers and consumers of the tea. In the year 2010 the world tea production reached up to 4.52 million tonnes. In the 17th Centuries tea arrived to Europe via Portages and Dutch sailors and then in 18th Century tea reached to Northern America. On December 16, 1773 Boston tea party was the political protest against the British government.

7. A Cupful Of Tea Facts

40% of the UK‘s fluid intake would be tea and UK consumes 165 million cups of tea each day.  China is the biggest tea producer with the annual production of 1,275,384 tonnes tea. On the number two is India that produces 805,180 tonnes of tea each year. In Tibet tea is served by mixing salt and butter in it and in Myanmar the pickled tea known as Lahpet is eaten. The annual consumption of tea per capita is Turkey 2.1 Kg, Ireland 2.0 Kg, UK 2.0 Kg, Iran 1.4 Kg and Morocco is 1.2 Kg. Ideal brewing temperature of white tea is 65-70 degree Celsius where as for black tea it is 99 degree Celsius.

In the 19th century blocks of tea was equal to money and almost 3 billion cup of tea is consumed daily by the world.  Tea can also be used for freshen up the air, cleaning the carpets and soothing the burns. 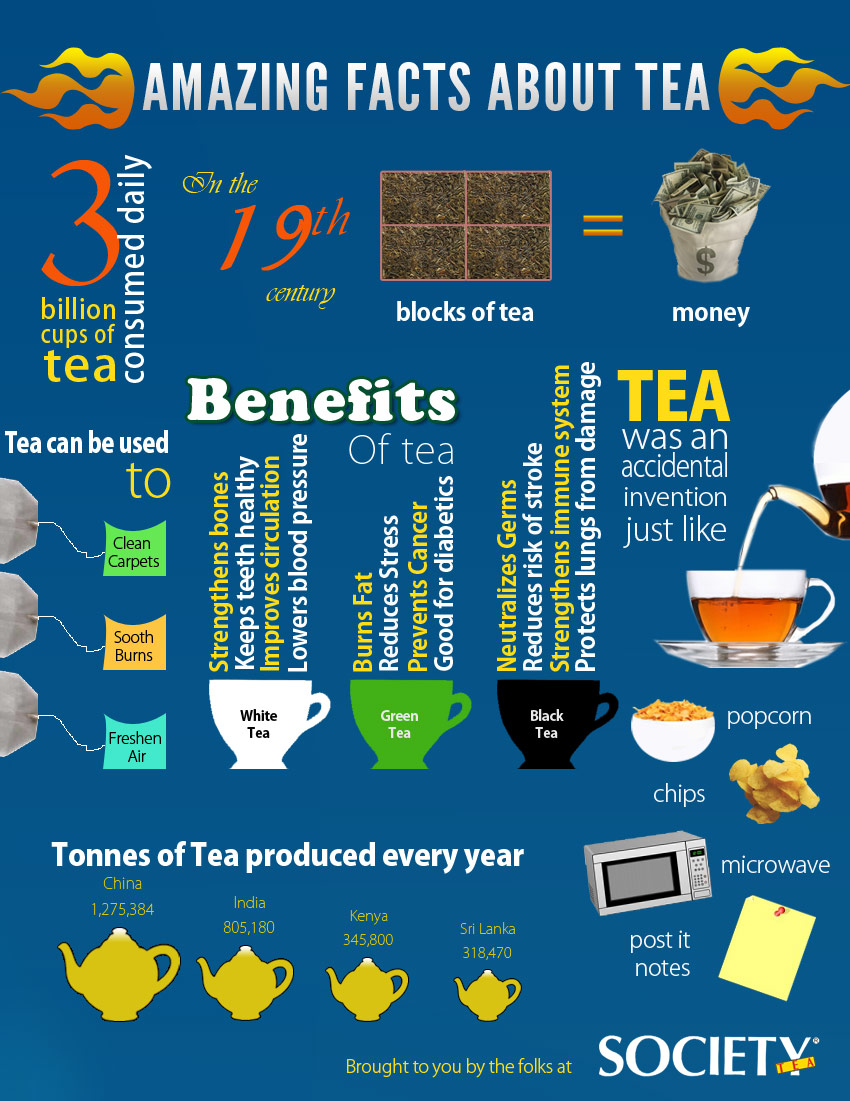 Coffee and tea has their own benefits but both these beverages have to be consumed in moderation because too much of anything can be harmful. It is a good idea to drink tea and coffee in small doses. Caffeine found in tea and coffee has various health benefits like it provides endurance during the work outs. It may reduce pain during the work outs that may help in longer work out hours. The muscular contraction could be enhanced during the work outs with the help of caffeine. According to experts daily caffeine consumption should be limited to 400mg for men and 300 mg for women. This roughly means to 4 cups of coffee or 6 cups of tea every day.

This infographic provides information on history of tea. Tea was invented by Chinese emperor Shen Nong.