Japan, an island nation in the east part of Asian continent, is called the land of the rising sun as it is this piece of land on the planet earth that receives the first rays of the sun every day. The people of this nation call their brethren as Nihonjin and the language that they speak as Nihongo, Nihon means something having origins in the Sun. Japan is known for its strong cultural values and the concept of keeping the family, society and nation above one's own self has been handed down to the generations of Japanese.

There is full freedom to voice an opinion in this nation and the crime rate is amongst the lowest in the world. After the bombings of Hiroshima and Nagasaki, the two well-known cities of Japan during the Second World War that completely devastated the nation, the Japanese have shown insurmountable passion to outdo the world in terms of technology advancements. They re-built the nation almost from the ashes of the World War and took it to the heights of being called the most advanced first-world nation of the world as of now.

A terrible nuclear power plant disaster was triggered by the earth quake in great east Japan that devastated the whole country. After the earth quake the rebuilding process is devastating. After an earthquake only 19% people would like to go back to the place and like to stay there. But a huge number of people will not like to go back to the place where they suffered earthquake.

Even after the massive funding from the government 90% people will feel that the earthquake reconstruction process is moving slower than the desired pace. Most of the people are unable to return to that area. 1 in 6 respondents will feel that their relationship with family has deteriorated after the earthquake.  But due to the immediate reconstruction needs despite the decline in income and job satisfaction an increase in available job is seen around the world.

On March 11th, 2011 Friday an earthquake of 9 magnitudes hit Japan which was followed by a Tsunami that brought a massive destruction in the entire country. It was the fifth most powerful earthquake that was ever recorded. The travelling speed of the Tsunami was 2.5 miles/sec.

Japan is ranked number 1 in the list of most advanced countries in terms of mobile market. 99% of mobile phone users in Japan are 3G users, 81% people use internet on their mobile. 77% mobile apps users are there in Japan. The cultural factors and high end of disposable income created huge market for mobile industry in Japan. Japan has high quality of craftsmanship that offers huge advantage for manufacturing industry. But due to the tough competition from countries like Korea and China, manufacturing was no longer the profitable business option for Japan and thus the country moved into sophisticated mobile services as they always had an upper hand in technology.

Mikitani Hiroshi founded MDM inc. which is Predecessor Company of Rakuten Inc. In 1999, MDM inc. was renamed as Rakuten. In the year 2000 Rakuten went public and in 2001 Rakuten travel starts online booking and reservation services. In 2003 Infoseek Japan KK is merged with Rakuten and in 2004 Rakuten Baseball is formed to start the professional baseball business.

Japan as a country has witnessed massive earthquakes and recently in 2011 Japan witnessed an earthquake of magnitude 9 that initiated a cataclysmic Tsunami in Japan. Seismic waves travelled at a rate of 2.3 miles per second and the duration of that earthquake was 6 minute. The maximum Tsunami height estimated was 125 feet. 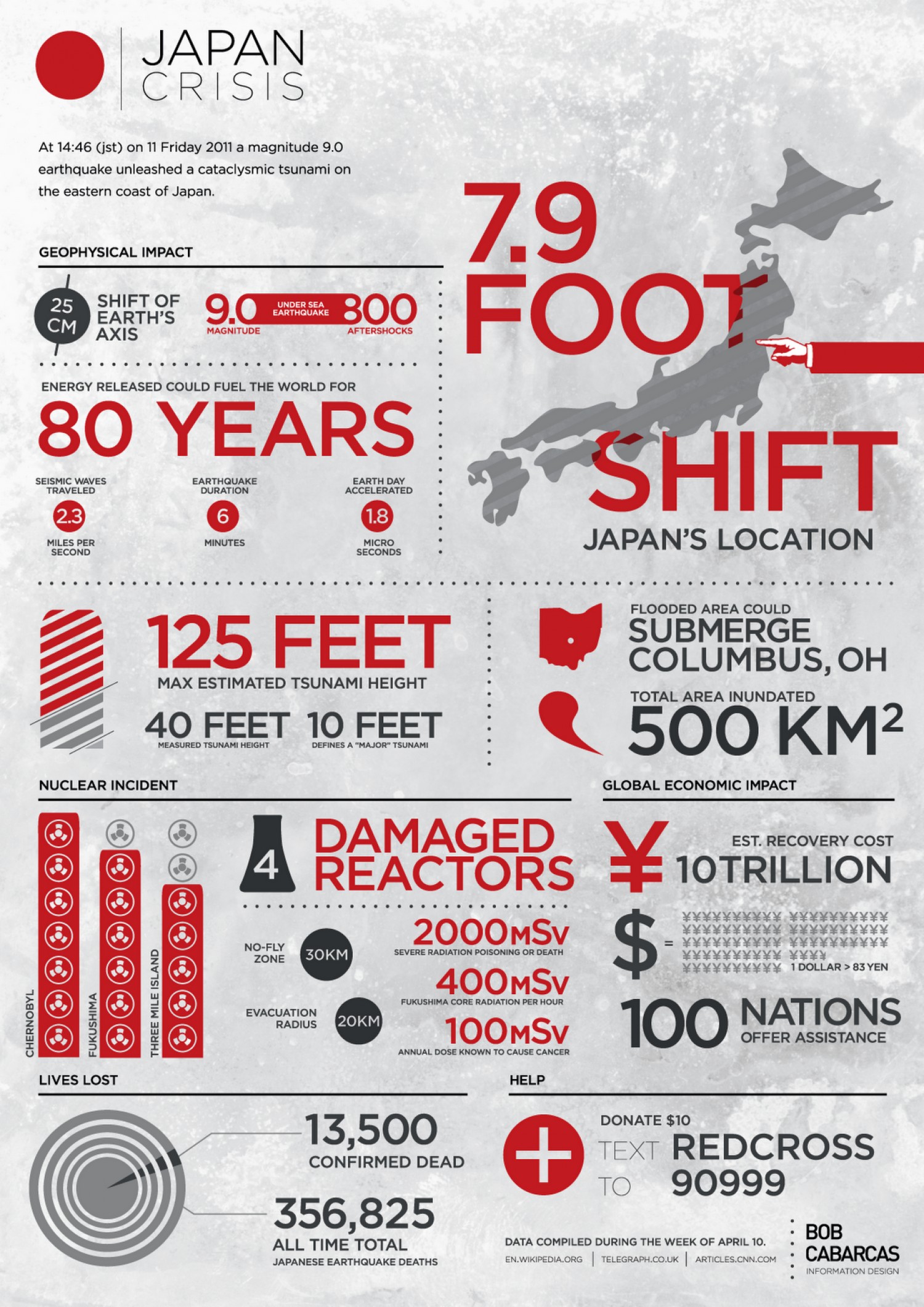 In the year 1900 the Australian scientist Karl Landsteiner identified the blood types for the first time. In the year 1916 a Japanese writer Kimata Hara wrote a paper that showed some direct connection between the blood groups and character of individuals.  In the year 1930 Military adopted the theory of personality that was related to the blood type. The Japan military tried to breed better based upon the blood types.

The Japanese name for Japan is Nippon which is the land of the rising sun. Japan is one of the major countries of Asia and is located between the North Pacific Ocean and the Sea of Japan. Japan is made up of 6,852 islands out of which only 430 are inhabited. Tokyo is the capital of Japan and the total population of the country is 127 million. The flag of the Japan is all white with a red colour circle in the centre which represents the sun. Japan is the third largest economy in the world and Japan specialises in the manufacturing of cars and electronics.

In the year 2011 Japan suffered great loss during the 9.0 earthquake that also ignited a Tsunami in Japan. One of the most damaged industries that day was car industry in Japan. As a result of the earthquake and followed by the Tsunami almost 230,000 vehicles were destroyed in Japan. By June 2011 almost 15,000 mails reached to Japan government for deregistering the vehicles. Only some people could actually get the refund on the tax that they had already paid for their vehicles. 15.69 million tons of debris was produced as a result of Tsunami.

9. Containing The Fukushima Disaster By Japan

Fukushima Power plant has a combined capacity of 4.7Gwe of power generation. Fukushima Daiichi power plant is located at 95 Km south of Sendai. In 1971 this power plant was started to create the nuclear power supply since Japan has lack of other fuel resources. Total 6 boiling water reactors are seen in that plant and the plant was designed by GE and it is maintained by Tokyo Electric Power Company.

10. All about the Town Of Niseko

Niseko is rewarded as best Ski terrain in Japan and average snowfall in March is 351 Cm. This town is very popular for its powder snow and it has many famous resorts at mountain elevation. The town has a huge range of summer and winter activities. In summer people can enjoy various sports like badminton, tennis, horse riding, cycling and boating and in winters the games that can be enjoyed by the people are all snow sports. This town is located on the island of Hokkaido on the northern region of Japan and its name Niseko is derived from the Ainu language that means a cliff that is jutting over the riverbank and located deep in the mountains. 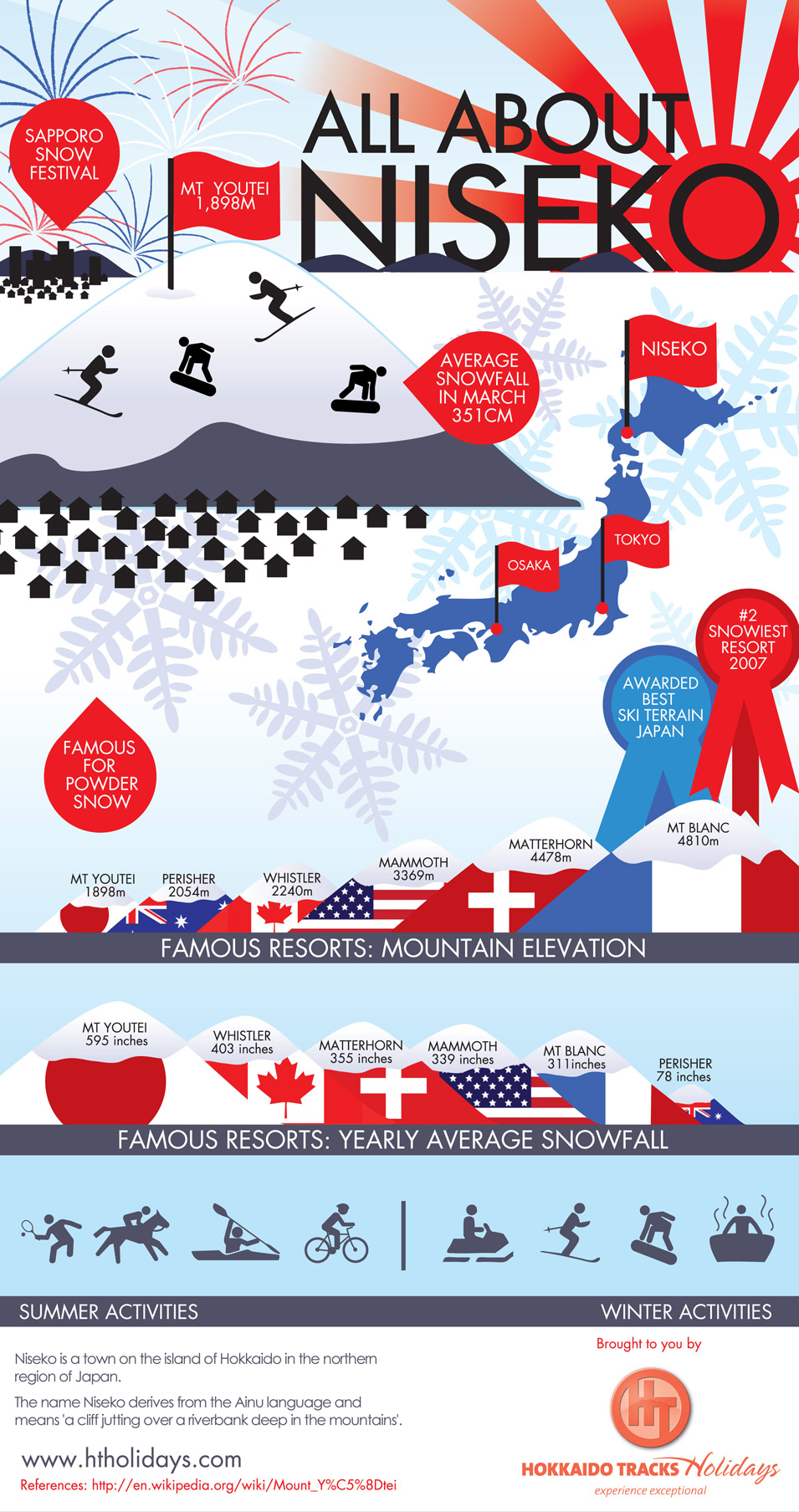