Germany is in Europe and is part of the European Union having a federal parliament. The history of Germany dates back to the German revolution in the year 1918 followed by the Nazi rule under the leadership of Adolf Hitler.

It is a developed economy with a very high standard of living with the world’s oldest universal health care system. Berlin is the largest city in Germany and is its capital too. It is the fourth largest economy and one of the second largest import-export countries in the world.

Germany has a temperate and seasonal climate which experiences very cold winters and very hot summers.

With Germany due to hold its general elections a review has been done on the various campaigns that are being played out on social media platforms like Facebook. The analysis revealed the total number of fans, fan gains, people talking about various parties and percentage of total interaction on Facebook in this regard.

Full name of Germany is Federal Republic of Germany and originates from a Latin word Germania. Some of the former names of Germany are German Empire, German republic and German Reich. Berlin is the capital of Germany and is located in Central Europe bordering the Baltic and North seas. Germany is the second most populous country in Europe next to Russia.

There are 38,500,000 active gamers in Germany with 24,500,000 paid gamers. even the money spent on paid gaming is increasing by about 4% each year apart from 19% growth in the amount of time spent playing games. Even the statistics point at 3.7 game platforms per average gamer.

5. Tablet User Germany Vs US

6. The Future Of European Economy

When taking a closer look at the six key economic indicators across the European Union with trends in Euro 17 and EU 27 as a whole. Some of the key factors considered are debt to GDP ratio, deficit, unemployment, consumer price index and lastly per capita income.

A survey conducted among 1853 people to understand online shop[ping pattern revealed that 95% people purchased something online while only 5% said they did not buy anything online. About 59% people confirmed that they were planning to purchase something online in the next 6 months. 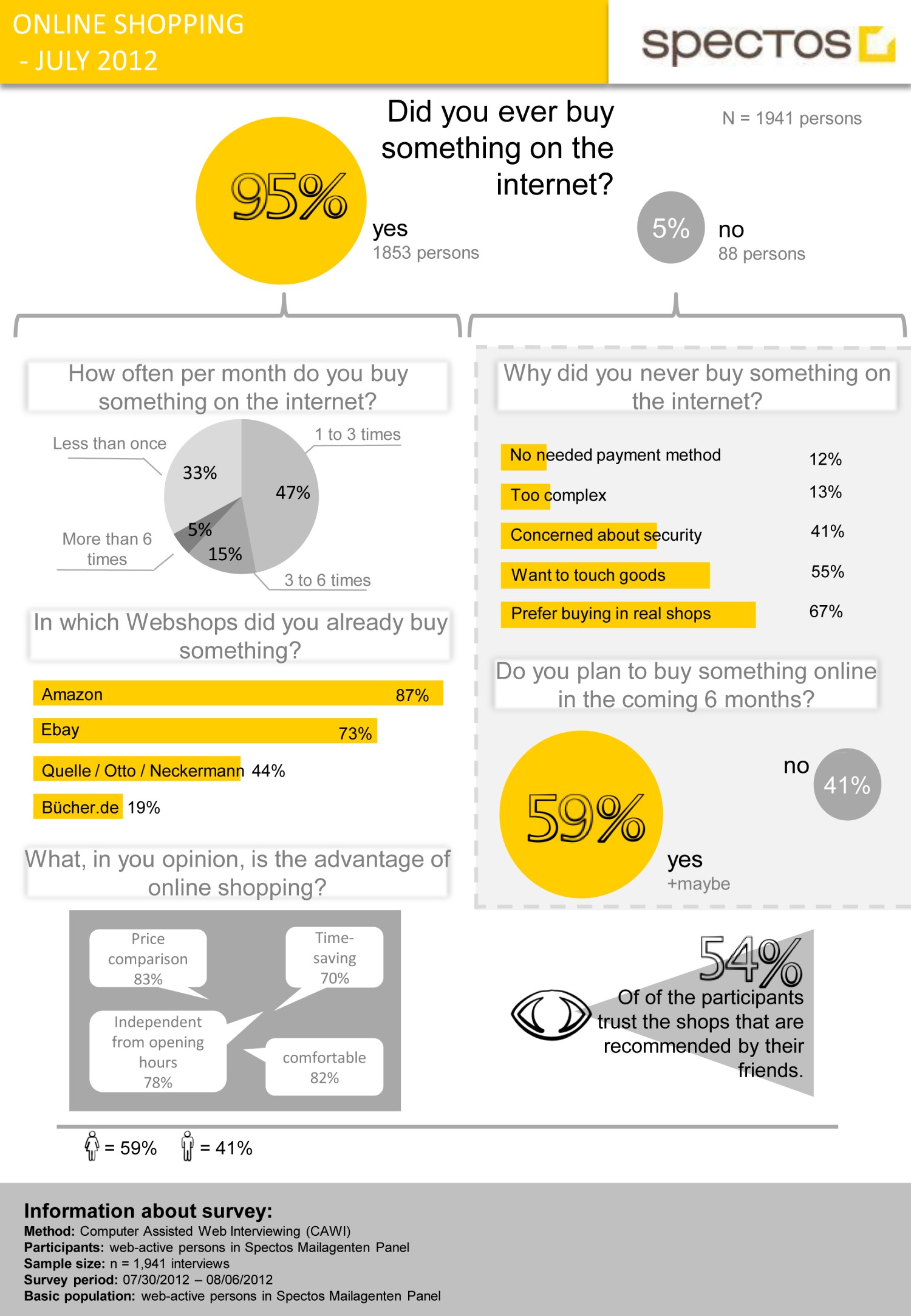 22% of Germans spend more on data backup. 21%of UK CIO’s says that their network security needs are not met.

There are four ways of obtaining German citizenship and one can attempt several routes at the same time. The four methods are descent from German parents, birth in Germany, naturalization and reinstatement of citizenship.

10. IT outsourcing From Germany To Ukraine

The IT outsourcing from Germany to Ukraine has seen tremendous growth with Germany being the most populated place and Ukraine the most populous. The reason for drive in outsourcing to Ukraine can be attributed to key drive choices such as low costs, strong R&D base, geographical and cultural proximity and positive references.

11. Everything You Need To Know About German Elections

Chancellor Angela Merkel leader of Germany’s conservative party won national vote in 2008 making her the only European leader to be re-elected. But as CDU narrowly missed absolute majority will need to form a coalition government. The most likely candidate for a coalition is the center-left social democratic party which received 25.7 percent votes.

When comparing the usage of search engine marketing amongst countries such as France, UK and Germany, statistics reveal that the population and internet users of France and UK are almost the same. But despite this fact it is France that spends the most on search engine advertising amongst the three countries with 57%, UK at 49% and Germany at about 35-41% which is the least.

Germany has dedicated server for internet users with premium bandwidth which is available at most affordable price of just 45 Euros per month. These dedicated servers are unmetered along with free installation and server boots. It is only in Germany that these internet servers are unmanned with absolutely no set-up fee and monthly contract options.

Many countries spend a lot of money every year for scientific research and development activities. Europe spends about 24.1% on research and development activities with Germany spending about 2.24% when compared to other world countries. The areas that Germany mostly spends are environment, health, physics, aerospace and transportation. The patents per capita comparison with other countries provides Germany at number 7 besides ranking it at 23% amongst the countries that will have the greatest impact on scientific impact in the world.

The various parts of the all new series of the iPhone travels nothing less than 20,000 miles to procure all its parts from countries such as UK, China, Germany and US. Starting from the U.S at Apple headquarters it travels 5215 miles to U.K and next about 5989 miles to Germany. In Germany the iPhone gets the touch screen overlay, baseband integrated circuit which completes 44% of the phone assembling before getting all the other parts to finally reach back the U.S.

The share of web browsing in Germany in terms of market share for 2012-2013 is distributed between Mozilla Firefox, Google chrome and Apple safari standing at 36.4%, 20.3% and 18.7% respectively. While safari and chrome have gained the market share the biggest loser is Firefox during the said period. 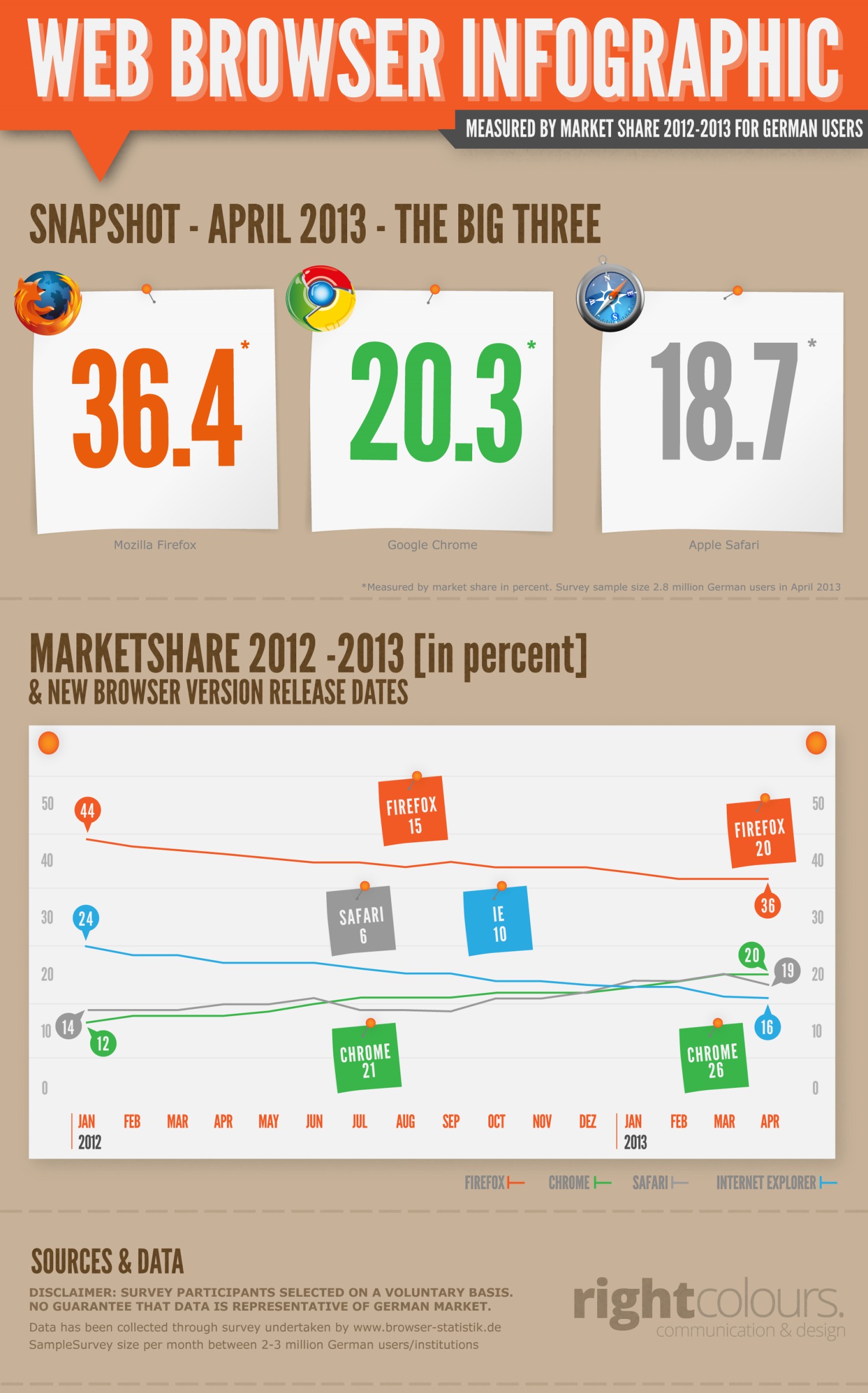 This infographic depicts on numbers behind the travel industry. Germans use 8.3 billion holiday days annually.