Diamond is basically a metal which is obtained from the Earth’s mantle by lengthy procedures. Diamonds are not only the most precious metals in the world but are also the hardest substances found on the planet. ‘Diamonds’ are a girls’ best friend’ is a statement which is famous all around the world and why not! All females adore diamonds because they are not only a status symbol but also the most beautiful piece of jewelry that one can own. Let’s get to know some more points about diamonds.

1. Why Does The Diamond Ring Cost So Much?

2. Will This Season Be Your Season?

More than 2.2 million couples get married each year and 85% couples have a dazzling diamond engagement ring to show for it. The top 5 center stone shapes are round, square, emerald, oval and marquise. The 5 most popular days to get engaged are Valentine’s Day, Christmas, Thanksgiving, New Year’s Eve and Bride to be’s Birthday. About 57% of the grooms popped the question in public last year and 33% of women do not want to be proposed without a diamond ring! It is surprising to know that 76% of men still feel the need to get down on a knee to propose marriage to their partner. 63% women answer to a proposal by saying that the guy should ask this question from her mom and dad first.

3. The Most Expensive Diamonds In The World

It is important to know that to judge a diamond, only the carats are not enough but one should also pay attention to the cut, the color and the clarity. A 1 carat ring costs $6000 and a 2 carat diamond ring costs $16000. The price difference is due to the fact that larger diamonds are rare and therefore are more valuable. The finger size also matters because the same diamond ring will look larger on a size 5 than on a size 9.

5. Diamonds for a new generation

Buying a diamond can be a daunting task as there are several factors which must be considered. For example, the cut determines how light travels through the stone and is reflected back to the eye, the clarity refers to the number of blemishes and inclusions within the stone,  carat is a unit of measurement and colorless stones are considered more valuable.

6. Everything You Need To Know About Diamonds

The earliest references of diamonds come from India around 400 BC and 1725. The resources of diamonds in India were depleted eventually. After India, Brazil was where diamonds were soon discovered. South Africa is now the favorite source of diamonds and is also the world’s leading production. Some common shapes of diamonds are round, princess, pear, oval, marquise, heart, emerald, trilliant, asscher, cushion and radiant. The more common colored diamonds are yellow, green and blue while colors like pink, orange and red are harder to find.

7. 10 Tips And Tricks To Buy Diamonds Without Breaking The Bank

The first thing to remember while buying a diamond is that diamonds with slight inclusions can help you save a lot and it is also recommended to buy a diamonds which is slightly less than 1 carat than 1 carat itself. Also remember that near colorless diamonds are close to colorless diamonds, look pretty much the same and cost less.  Buying diamonds online is significantly cheaper than buying from a jeweler and it is also important to know that while choosing metals go for white, gold and palladium which are cheaper.

8. How To Choose The Right Diamond Ring For Your Partner? 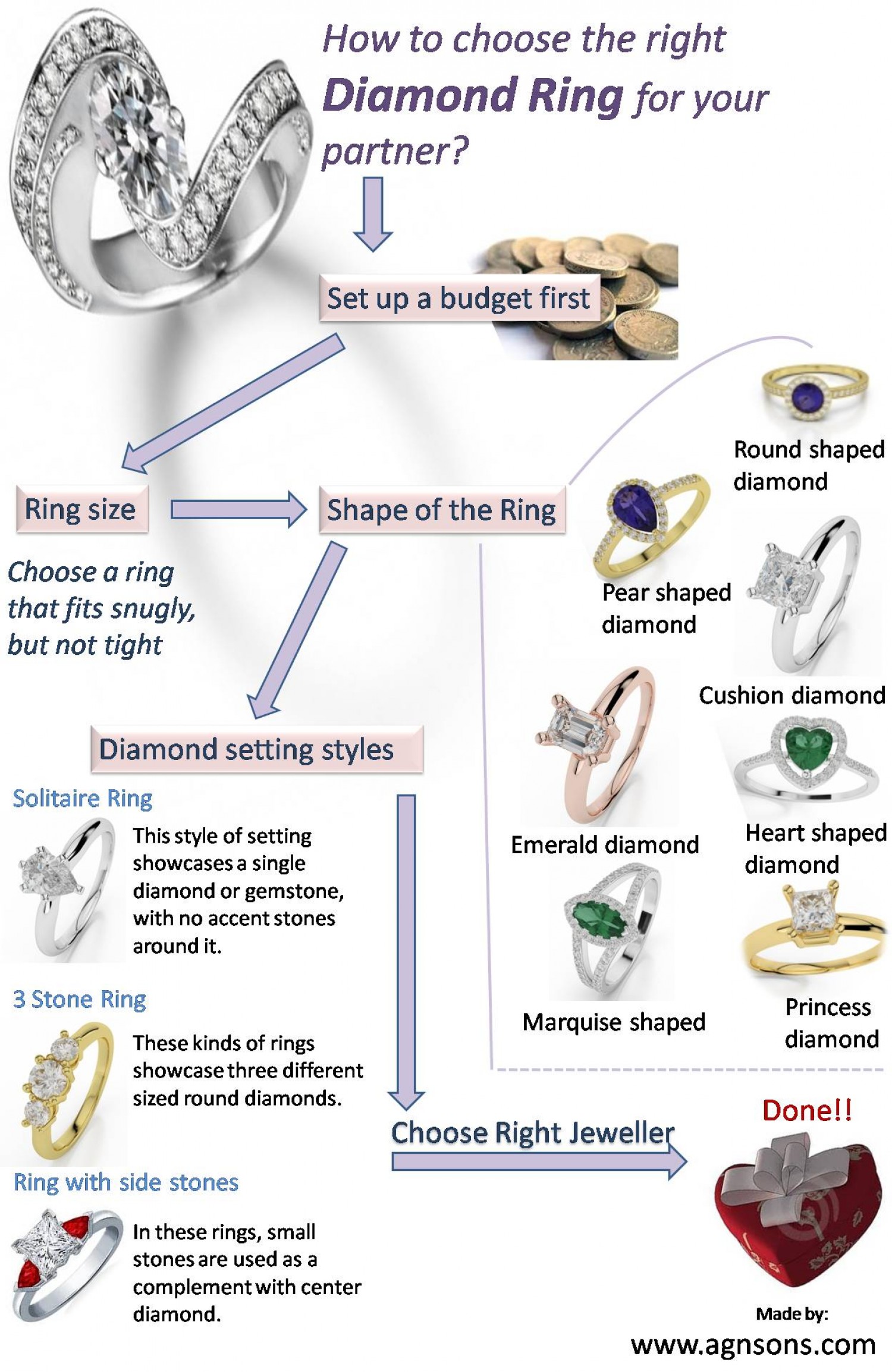