Ice cream is loved by people of all ages across the globe be it children, young or aged. Ice creams are available in wide range of flavours and varieties.

The American History of the tasty Ice Cream:

The American history of ice cream dates back to 5th century when the ancient Greeks mixed snow with fruit and honey to sell. Later on in 13th century, Marco Polo brings in Water Ice to Europe from Far East. The first ice cream parlour was opened in New York city in the year 1776 and then in the year 1851, the first ice cream stall was opened in which scoops of ice cream was served in shells. Ice cream soda was invented accidently by Robert M Green in the year 1874 and in the year 1904, the walk away edible cones were launched in America for the first time at St.Louis World’s fair. The year 1953 witnessed the official opening of the first Baskin Robbins store and Haagen Dazs was invented in 1960. The year 1991 was the debut year for the chocolate chip cookies dough ice cream

The popular Haagen Dazs Vanilla ice cream is made up of cream, sugar and skim milk and on its nutritional chart, it contains 270 calories, 21 grams sugar and 18 grams of fat. The Raspberry sorbet from Haagen Dazs contains 150 calories, 0 grams fat and 36 grams of sugar. The SODelicious Vanilla bean coconut ice cream contains 8 grams of fat, 130 calories and 10 grams of sugar. The top 5 flavours of ice cream loved by people are Vanilla, Chocolate, Strawberry, Chocolate chip and butter pecan.

Some interesting facts about ice cream:

The maximum ice cream is consumed in America where an average person consumes around 48 pints of ice cream in a year. The residents of Portland, Oregon consume more ice cream than any other city of US. Garlic, Avocado, Jalapeno and dill pickle are some of the weirdest flavours of ice cream that has been manufactured. In the year 1988, the biggest ice cream sundae was made in Edmonton, Canada which has a weight of around 54,917 pounds.

Your favourite ice cream has a lot to say about you:

In order  to make your favourite ice cream at home first of clean all the parts properly and then assemble them as per the instructions given. Then collect all the needed ingredients like heavy cream, whole milk, extract of your choice, granulated sugar, additional toppings, fresh fruit or juices and others. Then place all your ingredients in the bowl and put the bowl in the unit. The built in compressor of the unit will get your ice cream ready in some time.

The most expensive ice cream sundae:

The most expensive ice cream sundae is served at Serendipity 3 in New York City which is known as Golden Opulence Sundae and comes for $1000. The sundae is made from 5 scoops of richest Tahitian vanilla bean ice cream that is infused with Madagascar vanilla. The sundae comes with 23K edible gold leaf, the world’s most expensive chocolate from Italy and Caribbean cot of Venezuela, exotic fruits from Paris and the top of it, the sundae comes with 18k gold spoon. The store also serves Frozen Haute Chocolate for $25,000. 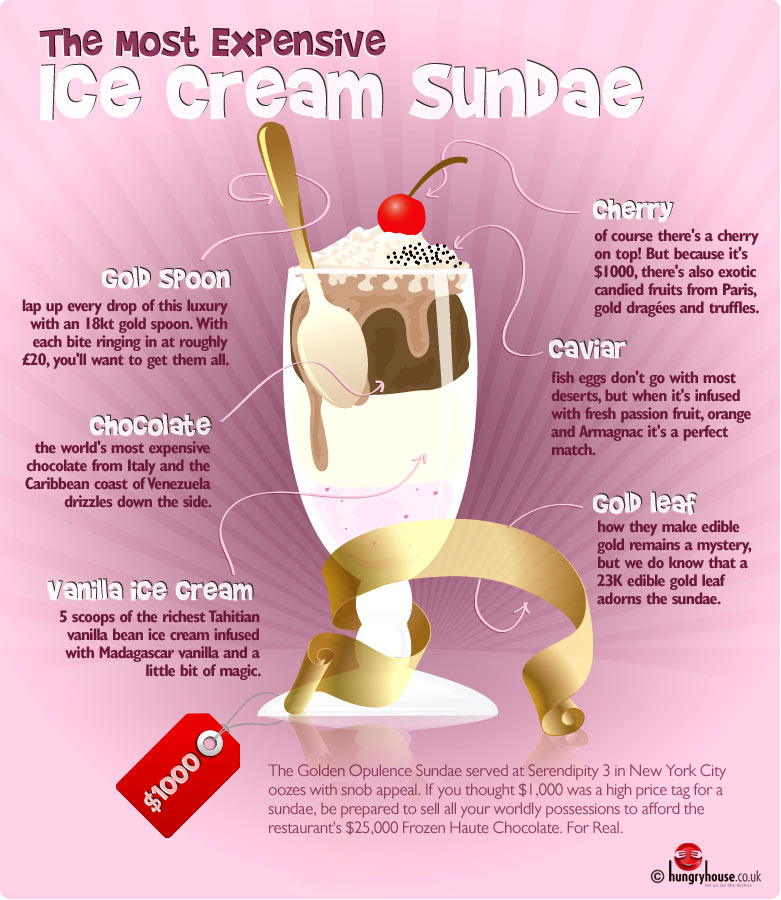 While consuming ice cream one should keep a check on their consumption so that it’s healthy. Some of the ingredients that one should avoid in ice creams are artificial colours, sucralose, partially hydrogenated oils, high fructose corn syrup, polysorbate 60/80, acesulfame potassium and sodium benzoate.

In the US, around 2 billion gallons of ice cream are produced in a year and about 90% of the household in America purchase ice cream on regular basis. Around 60,000 metric tons of ice cream is exported in a year which amounts to $63 million and the largest buyers of ice cream are Mexico, Canada and Caribbean. “Frozen Novelties” are ice cream like products that contains little or no dairy content at all and the vending machines sells around these frozen novelties worth $886million in a year. 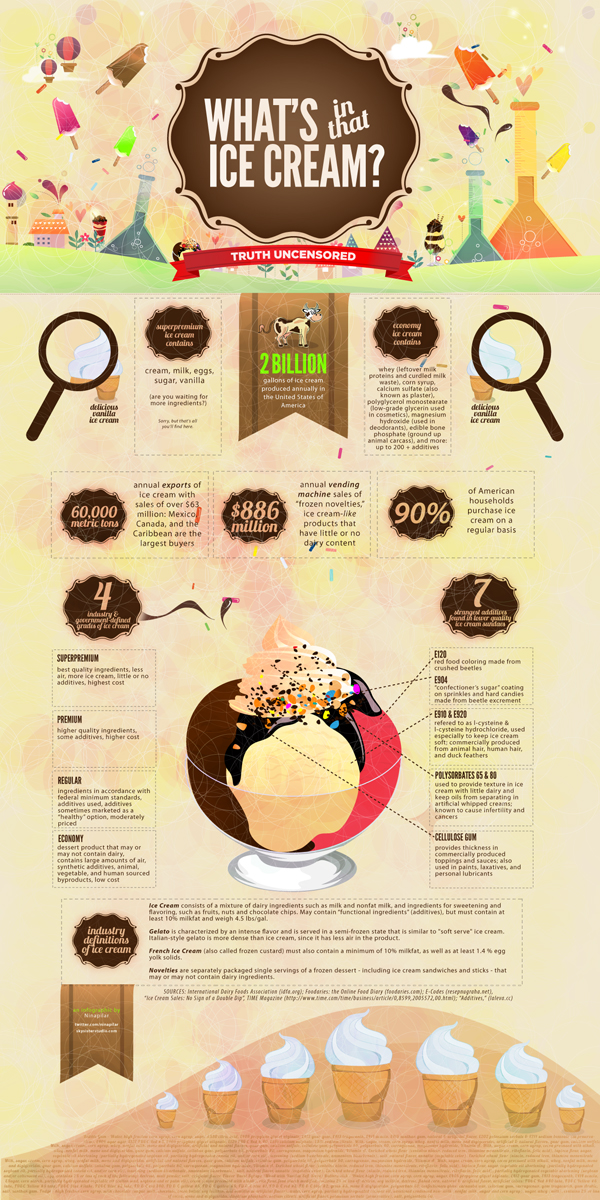