HIV/AIDS is an incurable disease which has been spreading like a forest fire ever since it was first reported. To know more about it, please read the following.

HIV stands for Human Immunodeficiency virus and it is a virus that attacks the immune system. AIDS stands for acquired immune deficiency syndrome which is a medical condition. There were about 33 Million people living with HIV/AIDS in the year 2009. There still is no cure for this disease and the only way to be safe is to be aware of how HIV is transmitted and how to prevent HIV infection.

3000 young people between the ages of 15-24 are infected with HIV every day. Young women account for 86% of new infections among young people worldwide. 34% of young people have comprehensive knowledge of HIV. 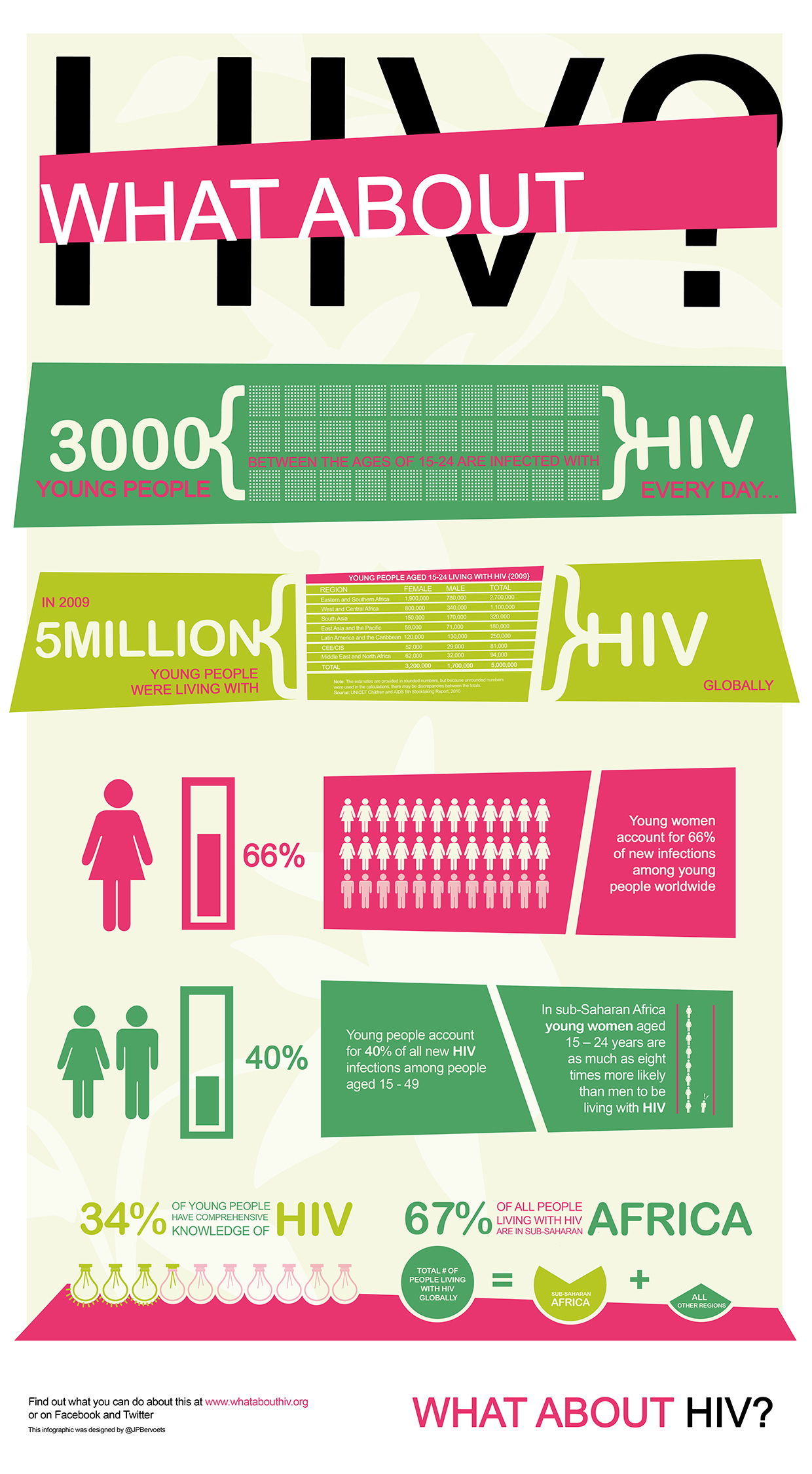 Things to know about HIV

It is a fact that 1 in 5 Americans are living with HIV is unaware of their infection.  There is no cure for HIV but this disease in 100% preventable. Every 9.5 Minutes, a person in the US gets infected with HIV. The only way to know if HIV is present is through HIV testing.

AIDS and the drug war

1 in 3 new HIV infections outside sub Saharan Africa is caused by syringe sharing. Sterile syringe access can save a lot of money too because treatment for one AIDS patient is $34000 per year. The scientific consensus is that syringe access programs are an effective means to reducing HIV/AIDS.

Progress in the fight against HIV AIDS

HIV is a decedent of SIV. Basically HIV is the actual infection which on the advanced stages is called AIDS. No one really knows about the origin of AIDS but it is speculated to have originated in West Africa in the 1940s or 1960s.

30 years of AIDS in the USA

The first case of AIDS was reported in the year 1981 but it was only in 1984 that HIV was identified. The first rapid AIDS test happened in 1992 whereas in 2002, the first finger prick rapid test was conducted. Till now, researchers are continuously trying to find a cure for this deadly disease.

Symptoms and spread of HIV and AIDS

HIV causes AIDS. Some symptoms of HIV are fever lasting a month, unexplainable weight loss, constant cough, diarrhea lasting over a month and Sepsis etc. The infection spreads due to unprotected sex, use of non sterile tattooing, joint use of syringes, needles and use of other people’s razors or tooth brushes with blood residue etc. 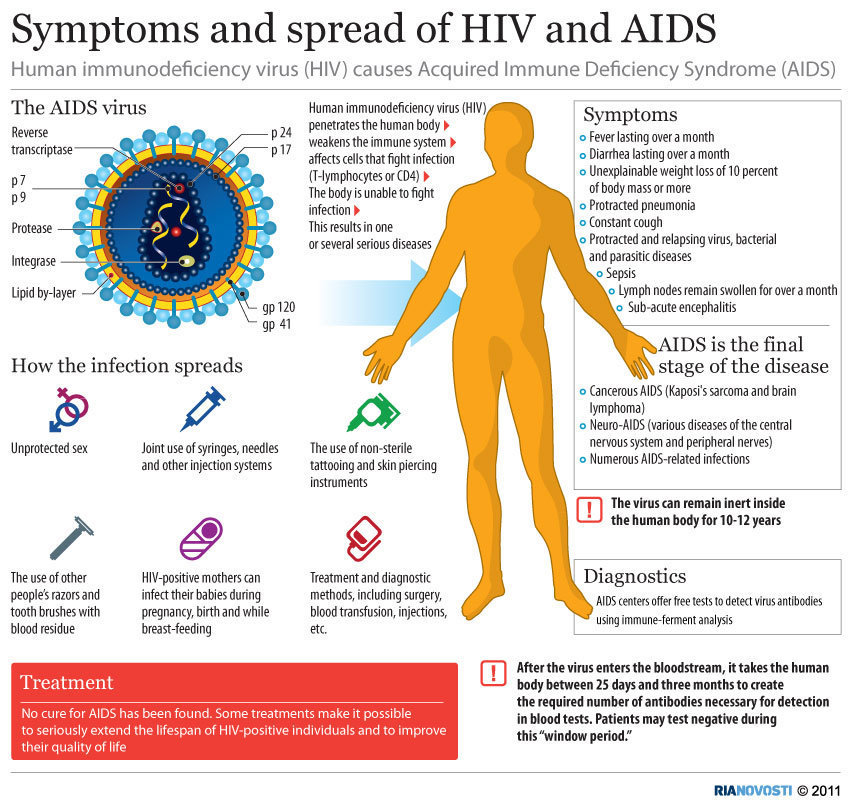 The changing face of AIDS

The annual growth of the virus has experienced a steady decline. Deaths related to aids were most in the year 2004 at 2.1 Million but in 2009, an estimated 1.8 Million people died due to AIDS. 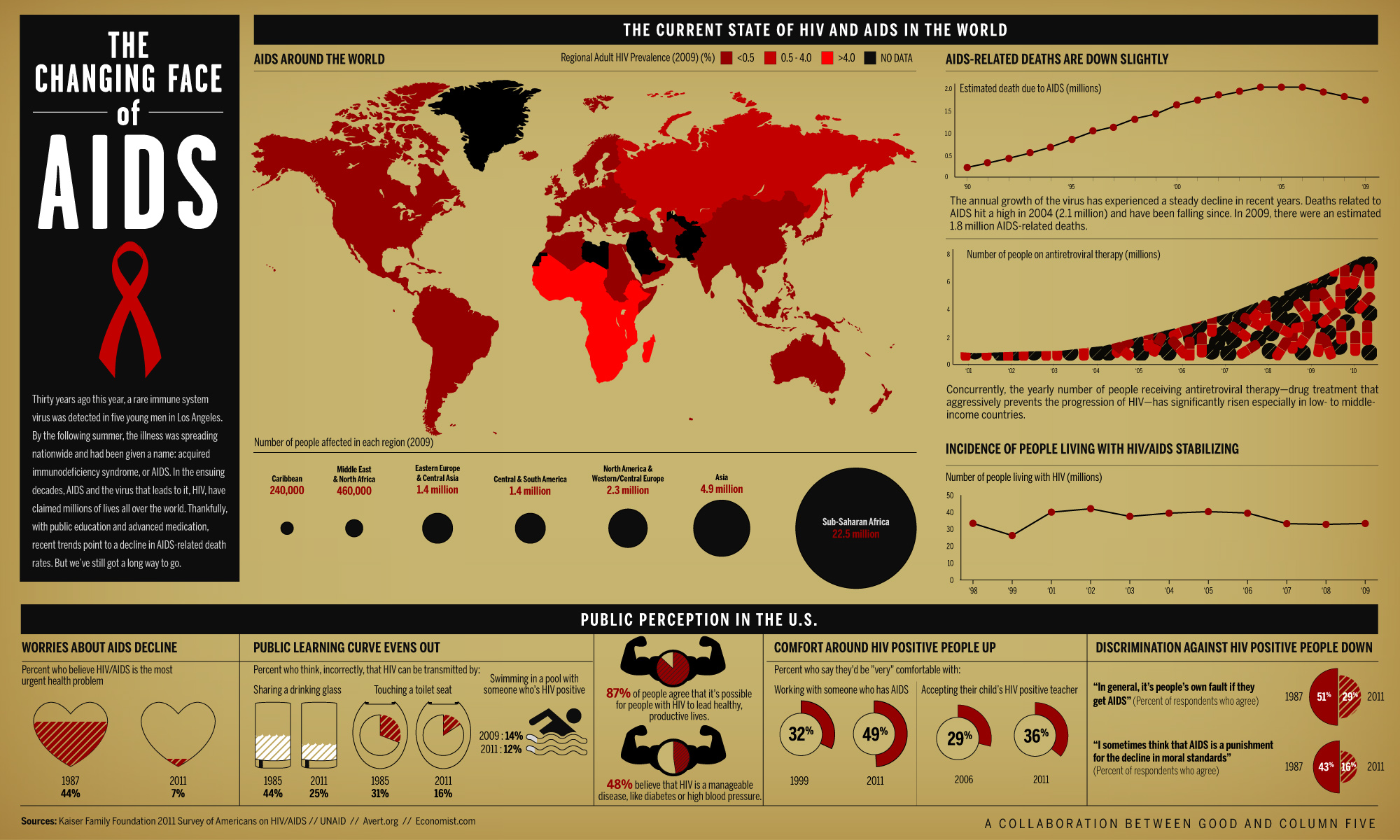 The total number of HIV infected people in the world is between 31 Million and 35 Million. Russia is among the countries with the highest AIDS mortality rate. 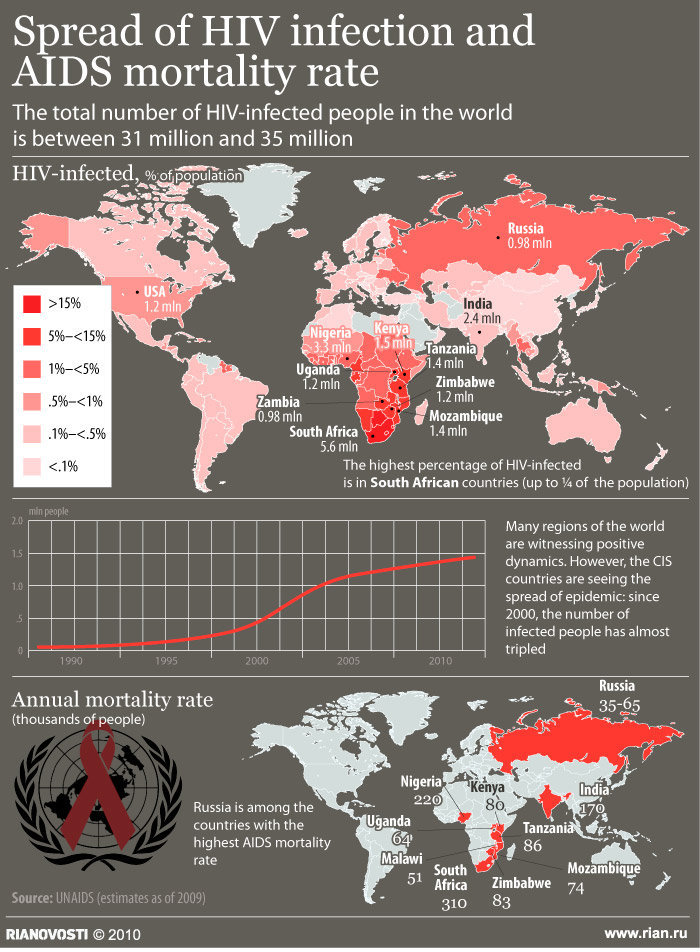