Gold is a rare metal and it is also the first metal that was known to the mankind widely. Gold was first time smelt by the Egyptians in 3600BC. Gold is soft, lustrous, dense and it does not react with moisture and air. Pure Gold is so soft that one can create an indent on them by simply biting it with their teeth. If all the Gold that is mined since the dawn of the civilisation is collected then it would easily fit in a cube of size 20m X 20m X 20m.

Examination of data from the private, public and government sponsored companies shows that there are around 439 undeveloped deposits or the producing mines. When combines, these deposits hold will come to 3,015,542,164 Oz. Grasberg is the largest Gold mine in the world and the primary resource produced by it is the copper as it has around 88 million oz of Gold and 10,000x more of copper. The Pebble Deposit Alaska in USA is the largest undeveloped Gold and copper deposit in the world.

Vaulted Gold is a 100% real Gold bullion that is stored in the high security vaults professionally. This type of Gold features outright ownership, inspection and regular audit, insurance of Gold holdings, independent professional storage and delivery option. The demand for Gold investments has increased by more than 1000% to over US$80 billion since the year 2004.

The total amount of Gold that has been ever mined is around 167,000 tonnes and it would take around 120 standard sized shipping containers to fill this quantity of Gold. If we value the current market value of all the Gold available in the market then it would reach a figure of around US $8 trillion.

The four major different fields in which Gold is used includes 51% in jewellery, 18% in investment, 17% in central banks, 12% in technology and 2% is unaccounted. When it comes to Gold investment then there are various forms of it which includes investment funds, physical Gold, Gold securities, collectors Gold, mining stocks, Vaulted Gold, Gold bullion and others. 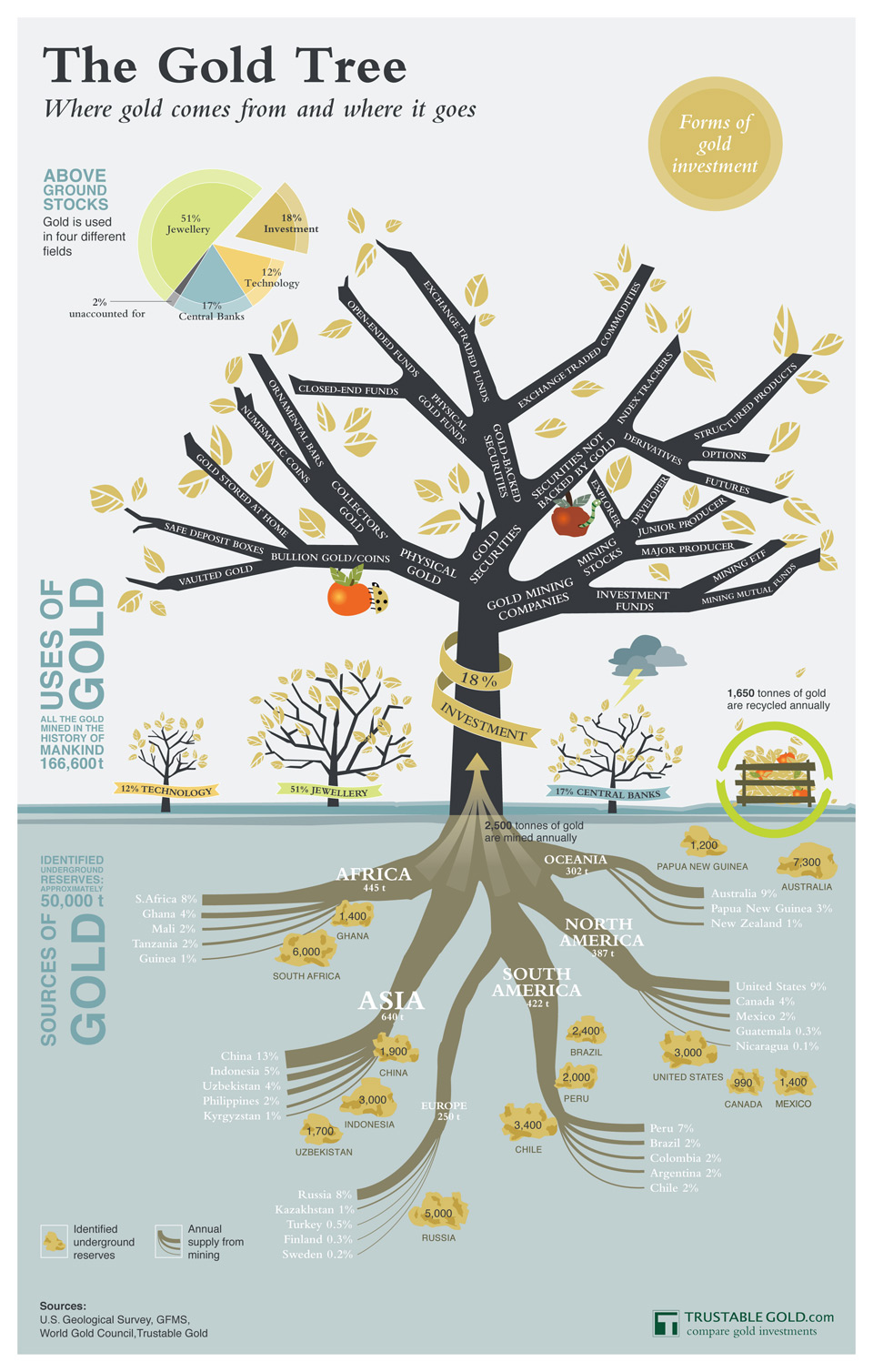 The life cycle of Gold starts with the mining of the ore containing Gold from the earth. Then the ore is processed through various steps like crushing, leaching, Elution, precipitation and others to reach the form of pure Gold bars. These Gold bars are then either used in the making of jewellery or for an investment purpose. The jewellery is used by the consumers whereas for the trading purpose they are ordered from the website. The unwanted Gold is sent back for which the person is paid the money. Finally, the Gold is re-sent to a bullion house and then melted again into Gold bars.

Gold Prices and their determination:

The price of Gold has changed drastically in the last 30 years. In the year 1980, the price of Gold was 800 USD/oz and in September 2010, the price stands at 1274.80 USD/oz. The Gold price is calculated on the basis of gold trading and the derivatives market. In September 1919, a procedure called Gold Fixing was originated in London that provided daily benchmark price.

There is a big list of the Gold robberies but some of the major ones include Nazi Gold Disappearance with robbery of worth $3 Billion, Guinness World Record Heist with robbery of $50M, Brinks Warehouse robbery worth $20M and Bre-X Gold Mine Scam worth $6 Billion.

Uses of Gold In technology:

Gold being a versatile metal, around 10% of the total Gold is used in technology which include fields like computers, telecommunications, medical equipments, defence systems and other technologies that are mission critical. The US Columbia Space shuttle used around 41Kg of Gold which also provided protection from radiation to the Astronauts.