The colors of your clothes speak a lot:

The colors of your clothes speak a lot and while selecting your clothing for a particular event their color plays a major role. The Black color is associated with power and authority and moreover it makes a person looks thinner and stylish. White color clothes are appropriate for interview as it resemble simplicity and cleanliness. Red is the most emotionally intense and aggressive color whereas green represents nature.

Getting Ready for a Wedding:

If you are invited for a wedding then one of the major challenges is to decide your clothing. There are various ways to dress for a wedding and for males some of them include white tie with a tuxedo, black tie with a tuxedo, formal or black tie, beach formals, semi formal and casual. For females some of the dressing ideas include formal full length ball gown, chic cocktail dress, a long dress, formal summer sundress, dressy skirt and top and pants with a top.

Most Common Mistakes made by men while dressing:

Some of the most common mistakes that are committed by men while dressing are, keeping a big and bulky wallet at back, improper shoes knot, wearing flip flops everywhere, too much matching , extra long sleeves, too much spray of cologne, wearing gym clothes in public, wearing socks with sandals and many others.

Sunglasses are undoubtedly an essential part of a person’s style statement and the style of these shades keeps coming back years after years. During 1950s, the Wayfarer and Aviators were in fashion, during the period of 1960s, one could witness teashades and oversized sunglasses. The bullet hole and the wrap around became famous in the 1970s whereas the 80s witnessed the mirrored glasses. The return of teashades and wayfarer were seen in the later years and during 2010 Snookies came into fashion. 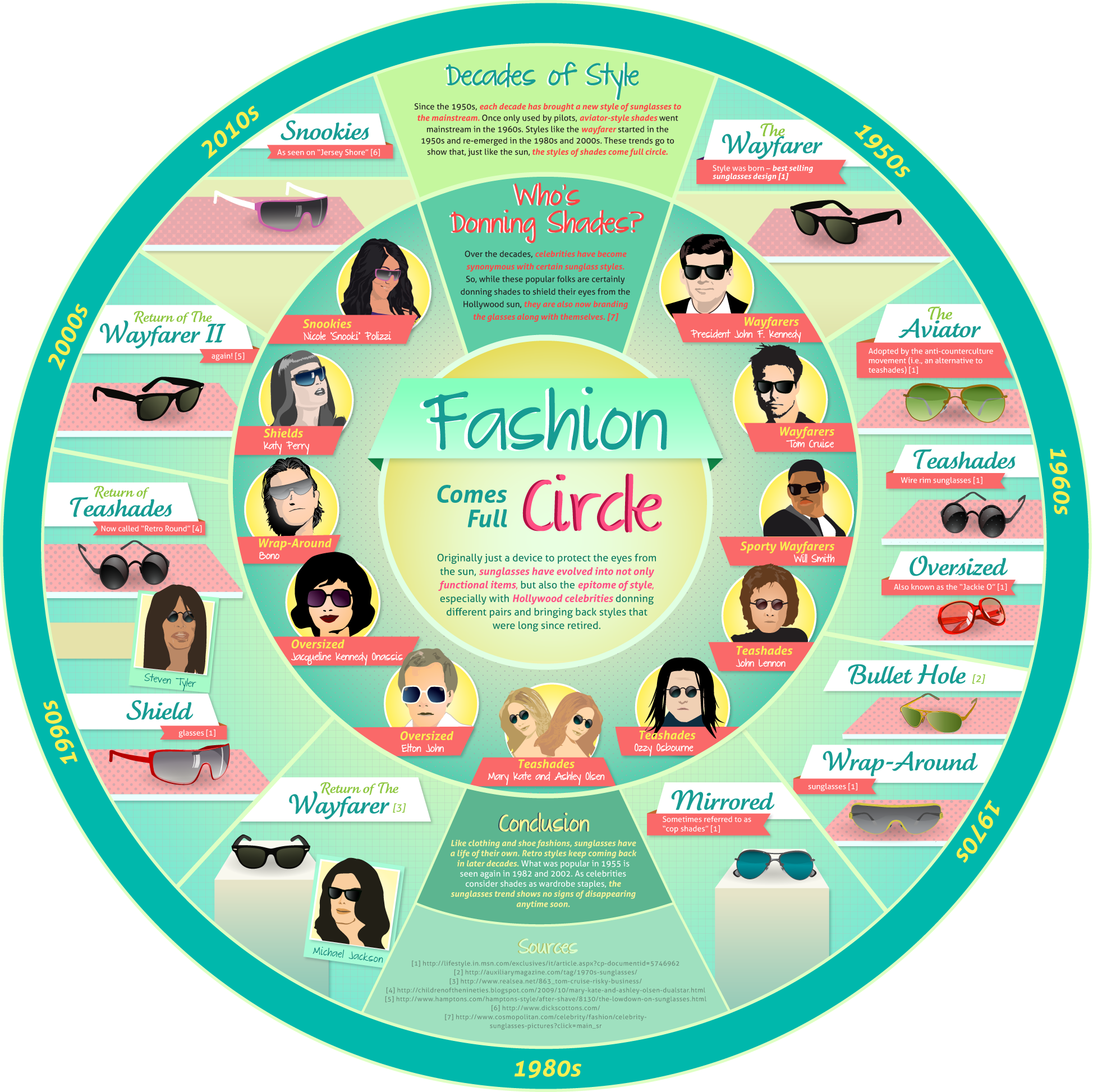 Interesting Facts about your shoes:

On an average, men has around 12 pairs of shoes while on the other hand, women owns 27 pairs of shoes. In UK, an amount of around 6 billion pounds is spend every year on the purchase of shoes.  The ruby red slippers of Judy Garland from the 1939 movie “the wizard of oz” is considered to be the most expensive shoe as it was auctioned for $665,000. Imelda Marcos, the former first lady has the largest collection of shoes with 3400 pairs and her name is also listed in The Guinness Book of Records for the same.

The women fashion has witnessed various changes in the last 100 years. During 1920s costume jewellery, T Strap shoes, drop waist flapper dresses and sheer stocking were in fashion. Then in 1940s halter tops and matching skirts and sweaters were loved by the females. 1960s witnessed the era of paisley and Indian prints, bell bottoms and miniskirts. The 1980s was the period of frills on collars and hems, ankle socks, Levis’s 501s and fake pearl long necklaces. If we talk about present day fashion statement then design denims, global prints, pale neutrals, nautical stripes and fur is loved by women.

Make your own custom Tee Shirt:

If you wish to get a custom Tee Shirt for yourself then you can follow the steps given. First of all decide upon the design that you want on your Tee shirt. Then get your design approved and separated. After this the design is printed on a Vellum film and then the film is registered on a screen. After this the screen is exposed and the film is removed from the screen before washing the emulsion from the screen. Then the screen is dried and taped. Then a plain tee shirt is taken and on the other hand inks are mixed. The ready ink is then applied on the screen and then the screens and the test prints are registered and registration marks are taped off. Finally with the help of machines, the Tee Shirts are printed which are then dried and ready to wear.

The team of IWYS promote various companies by the wearing the shirts with the name and the logo of the company. Around 2920 shirts have been worn by the team at IWYS since 2009 and they have more than 970 shirt sponsors including big names like Pizza Hut, Nissan and others. More than 3000 people visit the site of IWYS daily and it has over 37000 followers on Twitter.

In majority of the cultures, if you wear a T Shirt then you are considered to be dressed up. 98% of the people who wear an Ed Hardy T Shirt which has an average price tag of $75 own a Smartphone. If you wear a metallic graphic tee then you can be 100% sure of getting an attention.

Getting ready for the winters:

The winter jackets not only protect you from the outside cold but also make you look smart and stylish. While buying an outwear, one should consider various factors of environment like coldness, wetness, wind, heat and moisture. In order to keep yourself warm during winters you can follow tips like wearing loose fitted layers, wearing hat, mittens and snug, covering mouth and avoiding metal jewellery.

The style of underwear worn by a man has changed over the years. It started with Loincloth which was the original style and then moved to Braies, Codpiece, drawers, jock Strap, union suit, boxer shorts, briefs, Y fronts, Boxer Briefs and now the latest is Thong/G String. On an average, men spend around £1200 on their underwear in their lifetime whereas women spend around £20,350. 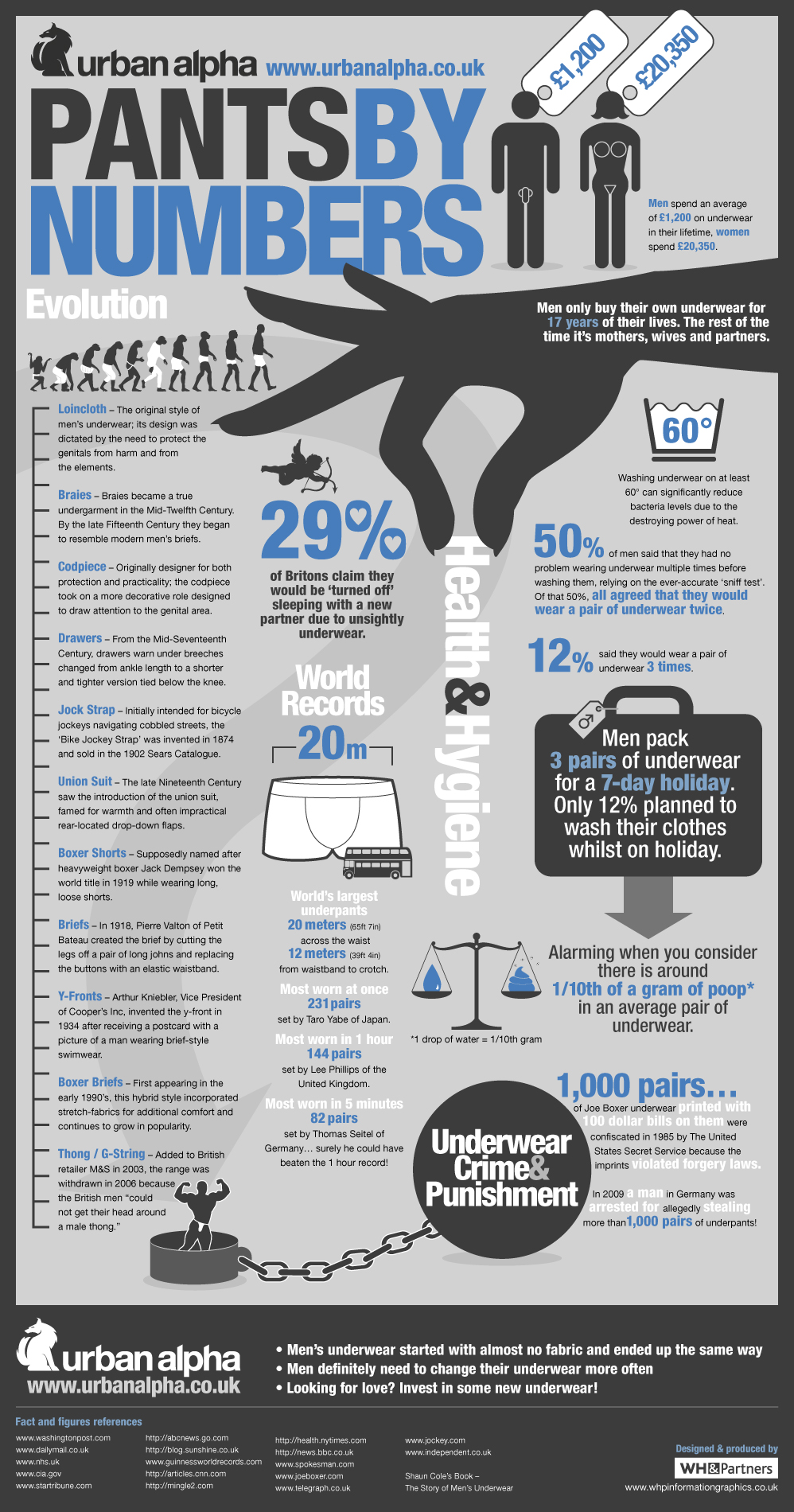