Black Friday is referred to the day after Thanksgiving that that marks the beginning of the shopping season for Christmas and New Year. It is believed that the term black Friday came from the fact that from January through November, retailers usually operated at a loss and it was only on the day after Thanksgiving that their accounts would see a profit, thus putting their figures from red to black.

Black Friday, in recent times have transformed from a day of shopping to a day when it is all about seeking out the most lucrative of the deals that are bombarded to them in the form of ads, sales and promotions by most retailers.

Pandemonium reigns large at retail shops and malls as shoppers queue up from the night before in a bid to be the first to access the discounts and promotions.

But quite a few ugly incidents have been reported over the years that is bound to make the shoppers think twice before attempting to steal from someone else’s cart this year.

The one term synonymous with Black Friday is ‘shopping’, since it marks the beginning of the Christmas shopping season. On this day, shops have been known to open up early to allow the hordes of shoppers to benefit from the day’s sales and deals. This year, the three most wanted items on the shopping lists around USA are The Denali Jacket, The iPad Mini and the Dell Inspiron 15.

2. Black Friday by the Numbers

It was believed that the name Black Friday came from the fact that from January through November, retailers would usually operate in a loss, thus having red markings all over their accounts and it was only on the day after Thanksgiving that their accounts would see a profit. In 2012, a record 89 Million shoppers were recording to be on the streets on Black Friday alone.

The pandemonium that reigns large on Black Friday at any shopping Mall can be survived only if you are properly prepared with the right kind of advice. On the eve of Black Friday, start training so that on the D-day, you are equipped with speed, strength and endurance to shop faster, harder and better than anyone in your vicinity.

A required tool for any shopping is not just the shopping list but also the knowledge of where to shop for quality sale as well as products. Walmart, Target and Best Buy were the three top retailers of 2012 and continue this trend even in 2013, selling popular items at discounts of 30% or more off their regular price.

For surviving the pandemonium of Black Friday, one needs to keep a survival guide handy at all times. Scheduling the opening-times for each sale is important as it helps tick off the items off your pre-planned shopping list quickly and without fail. Shopping for long hours is sure to make one dehydrated which is why carrying a portable hydration centre becomes highly necessary. 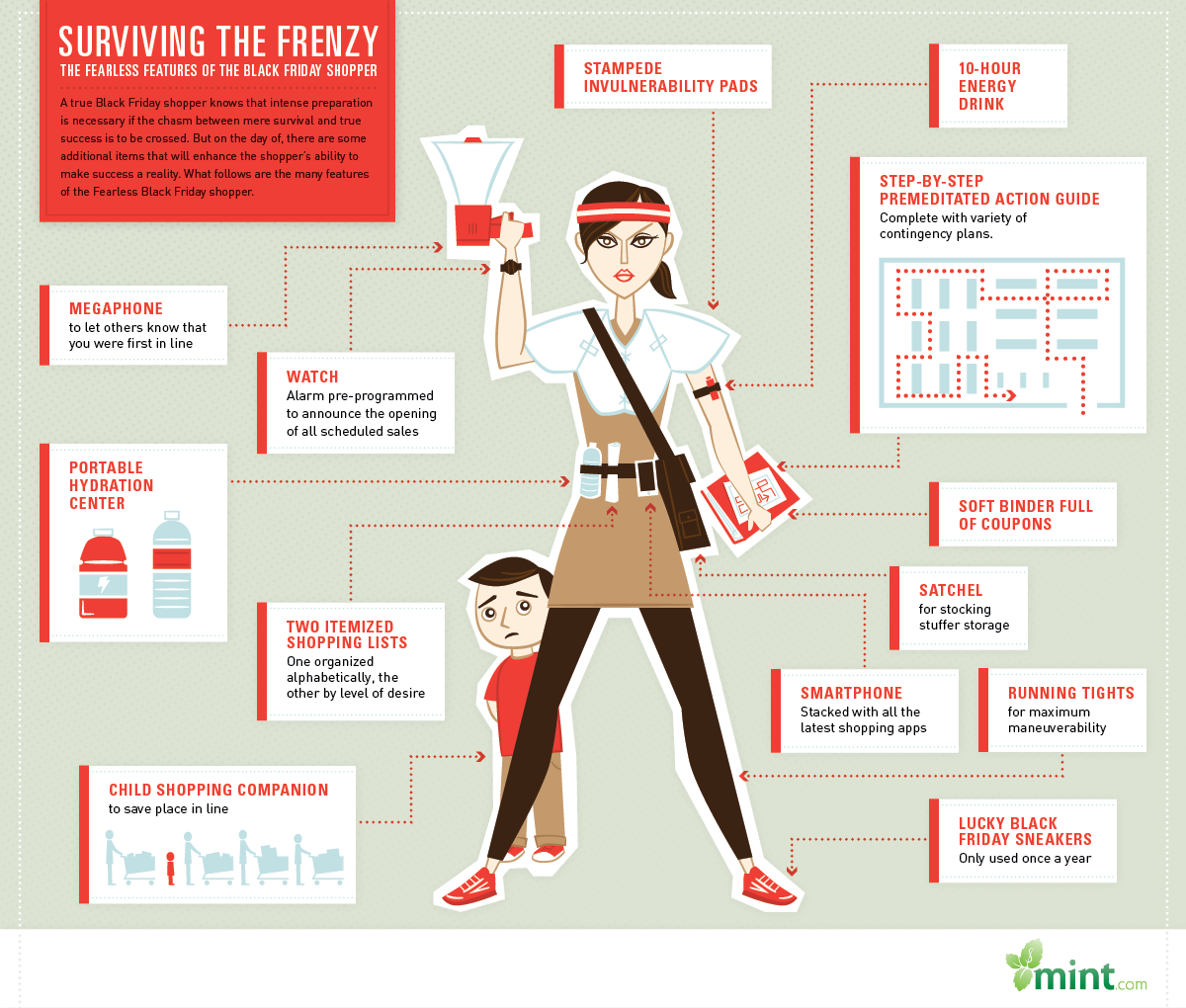 Black Friday, in recent times have transformed for a day of shopping to a day when it is all about seeking out the most lucrative of the deals that are bombarded to them in the form of ads, sales and promotions by most retailers. It has been noticed that 66% of the shoppers start their shopping in the days leading to Black Friday and only about 19% wait for the day itself to start their shopping spree.

The one thing that every shopper keeps an eye out for on Black Fridays is the deals and sales that every retailer puts up in advance. It is mostly seen that even loyal shoppers show little store brand loyalty on this day and are typically lured by specific deals or items that they may find when planning their shopping trip.

It has been found in a survey that off all who shop on Black Friday, 68% of them are female while the number of men shoppers are even less than half that number at 32%. The age group to shop the most is between 25 to 34 years of age, followed by people from the age group of 35 to 44 years of age.

According to a certain survey there are 62% shoppers who avoid shopping on Black Friday as they consider it too crowded. Which is why, retailers have developed certain tactics to lure in shoppers during the festival season. Some of the most common email themes used by retailers include promises of free shipping, free gifts with every purchase and extended free trial period.

10. Black Friday By the Numbers

Image Source: https://marketingland.com/holiday-shopping-2013-63492
Every store would want it to have its previous year’s customer returning to it. Which is why after a survey it was found that 69% of customers return to stores they used last year, the reasons being, good customer service topping the list with 70% followed by free shipping (62%) as well as good sales and discounts (58%).

With all the big retailers churning out deal after deal, small business owners also need to buck up in order to increase their sale and lure in shoppers. Preparing for and participating in the holiday shopping weekend might even turn negative margins from red, back to black. And it is in this regard that Black Friday has now been expanded to include Small Business Saturday and Cyber Monday so that shoppers may check off their holiday gift list on time for Christmas.

Even if one is not an intense Black Friday Shopper, one still does get interested into getting done with the holiday shopping on time. Hence, a good start with catching up on the deals is quite necessary. On items such as watches, toys and cameras as well as HDTVs deals can be had later in the season but buying Apple products, small laptops and other small appliances during Black Friday would be profitable.

Social Media has a huge impact on the attitude as well as shopping plan of 72% of the Black Friday Shoppers since 42 % of them are said to have availed great deal during shopping on that day. But some feel that it is better to avoid shopping on these days since the crowd might get too challenging to manoeuvre at times and when one can get the same deals online, just sitting at home and relaxing, why bother with so much trouble.

If you are planning to hit the stores this Black Friday for some of the greatest deals you have ever come across, you might want to think it through really. Because you might not be the only one after such deals and everyone else will also be gearing up for their share of the day of shopping and with news floating around on how ugly the situation actually got in the past few years, might make you think twice before taking the decision.

The dark night is around the corner, when after a day of football and with tummies full of turkey, shoppers rise at the crack of dawn in search of the lowest prices in the entire city. 86 million people will shop on Black Friday with 24% of shoppers will arriving at Midnight or even before.

This Black Friday, to tackle your shopping successfully, make a list of all the items you need to buy and then check out deals being offered on them online in addition to the paper ads. Be sure to compare the sale prices for both present and future sale as well as have coupons handy that might help you with added savings.

With all the planning for online shopping on Black Friday as well as Cyber Monday, a few scams and hacks are bound to creep up. As such it is advisable that shoppers should go ahead with only the sites they are familiar with. Any shopper looking for leaked Black Friday ads is bound to fall victim to these scammers.

It’s well known that the period between Black Friday and New Year’s Day is the busiest time of year for online shopping, a fact that criminals count on for carrying out cyber crime which is why constantly monitoring one’s brand on social Media sites is a must. Using a certain brand’s logo’s, images, trademarks, and employees names without permission from the brand owner has become a common practice online which misleads customer into thinking that these are the real sites.

Black Friday is not only a big day for the shoppers and deal seekers but also a big day for marketers. Not only does it mark the launch of the busiest shopping season of the year, it also provides marketers with a ton of valuable insights into consumers' shopping habits like what technology are the shoppers using to access deals and promotions or which is the better day to shop Black Friday or cyber Monday according to the shopper and so on and so forth.

While this Black Friday, American will shell out close to $45 Billion for gifts for their loved ones, somewhere around the world people might be waiting for half of that money so that they might have access to clean water or may be with almost ¼ that money, children deprived on even primary education might be able to go to school. So this Christmas, instead of spending money on things you might not even need a month later, donate to causes that might make a child happy for a long time.