About 5 trillion cigarettes are being sold each year, making them the single-most traded commodity on the planet. The Brazilians invented cigarettes in 1000BC by rolling tobacco leaves in a paper. In 1573, Sir Walter Raleigh introduced Tobacco in UK while in the year 1650; Tobacco was used in place of money due to its popularity. In 1950’s it was discovered that cigarette smoking causes cancer and in 2006, electronic cigarette was invented. 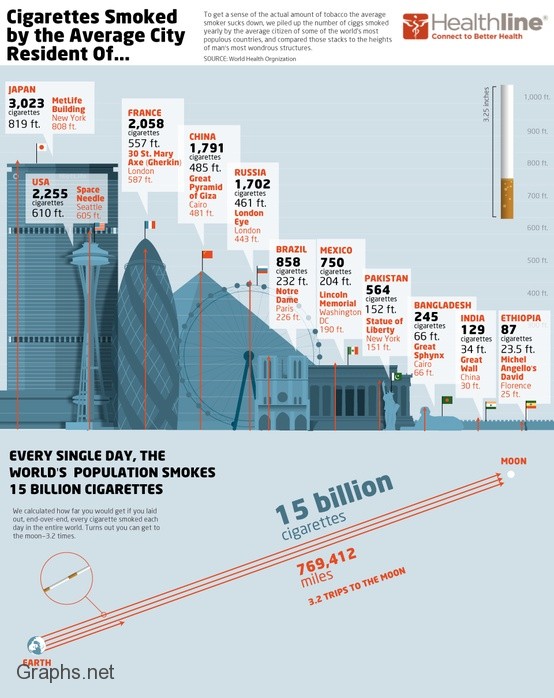 The similar Statistics for countries like USA, China and Russia are 2255, 1791 and 1702 cigarettes on an average.

It is quite shocking to know that about 1000 people under the age of 18 start cigarette smoking every day. This number is equivalent to the number of students in a high school. 1 out of every 4 high school student smokes whereas 1 out of every 5 women smokes during pregnancy. One might be surprised to know that Tobacco kills 20 times more people than murder does.

About 3500 people die due to smoking annually in Lebanon which makes smoking the primary cause of death in this country. Tobacco contains about 4000 chemicals, many of which are found in items like paint stripper, floor cleaner, ant poison and car batteries etc. An exposure to passive smoke for 30 minutes is equivalent to smoking 2-4 cigarettes.

5 million people die due to smoking every year worldwide out of which 443000 deaths are caused in the US alone. This number is more than the deaths caused due to alcohol, car accidents, suicides, AIDS, illegal drugs and homicides combined! In economic terms, US loses $ 193 billion due to cigarette smoking annually.

Each year, about 340000 children try hands at smoking for the first time which is 3 times the total capacity of Wembley stadium. About 14% of girls and 10% of boys aged 15 years smoke regularly around the world.

One must stop smoking because it causes 300% more risk of coronary heart disease for smokers 150% more risk for ex smokers. Only 10% of the unaided ‘stop smoking’ campaigns have been successful while 29 % of the ‘quitting with the help of the medicine’ efforts have seen light of the day.

The financial loss behind smoking cigarettes

An electronic cigarette or an e-cigarette can help you curb your craving for nicotine if you have taken the decision to quit smoking. These save you from the harmful effects of tobacco and are cheaper as well. There are two types of e-cigs-the 2 piece and the 3 piece. Some popular brands selling these cigarettes are Sky, Firebrand, Green smoke and eluma.

The effects of quitting

Within 8 hours of quitting, the oxygen level in blood will return to normal whereas in 2 days, no nicotine will be left in your body and the risk of heart attack will reduce considerably. Within 2 weeks of quitting, the blood circulation will increase tremendously and within 3-8 months, the respiratory problems will disappear.