In the United States, 1 person dies due to drinking and driving every 48 minutes! Drunk driving is an expensive affair for countries because $ 51 Billion are lost due to alcohol related crashes annually. So before getting behind the wheel under the influence of alcohol, one must either designate a non drinker to be the driver or get a ride home in a taxi or someone else’s car.

In the year 2011, 23% of the auto collisions were caused due to the involvement of cell phone usage which amounts to about 1.3 million crashes. Text messaging makes a crash 23 times more likely during driving. What is more surprising to know is that 77% of young adults are confident that they can drive safely while texting while 55% of them think that it is easy to text while driving.

How to survive a crash 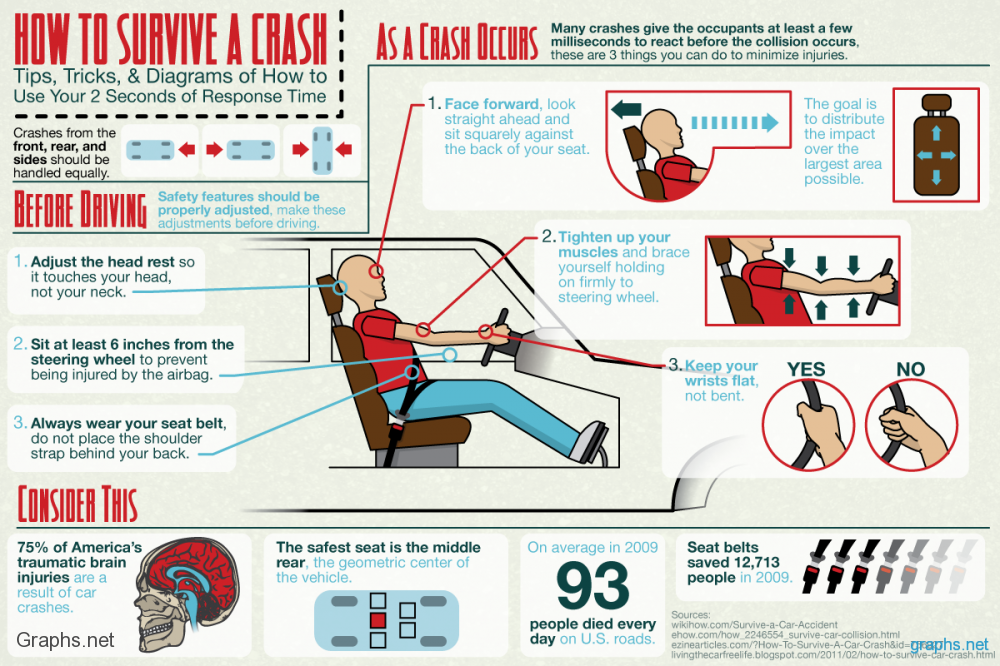 The three things that can be done to minimize the effects of a car crash are:

Statistics of crashes by young drivers

The reasons why young male drivers have higher crash rates than young female drivers is because they tend to take higher risks. It is a fact that one in five new drivers has a crash within 6 months of passing the driving test. The male drivers who are aged under 21 are 10 times more likely to have a car accident than those aged 35 years or above.

Worldwide, 1.2 million people die in car accidents every year. Out of the 121599 accidental deaths in the US in 2011, 33963 deaths were accidental car deaths.  It is shocking to know that in the United States, the number 1 cause of death for teenagers is car crashes.

The major causes of motor vehicles accidents are excessive speeds, Driver distractions and alcohol intoxication. Women are less likely to cause fatal drunk driving than their male counterparts.

Truck accidents and dangers attached to them

5061 trucks are involved in fatal accidents every year whereas 361 pedestrians and 87 cyclists are killed in traffic accidents that involve trucks. 84.7 % of the fatal truck accidents happened in normal weather conditions while failure to stay in lane was the most common factor which contributed to fatal truck accidents.

The dangers of driving

How dangerous are motorcycles

Some of the auto safety equipments and ideas that have been installed in vehicles are safer dashboards, child safety seats, airbags and side impact protection system, seat belts and Driver’s education.